This copy is bound in later quarter calf, it is probably a British Museum duplicate/de-acession.

This is a beautiful collection of portraits of Roman empresses, while not Vico’s best work it is still striking, The portraits are reproduced from coins, and are engraved inside fabulous architectural frames, decorated with angels, centaurs and other fabulous animals.This new edition is the first by Jean-Baptiste Duval, who reworked the plates and made substitutions and additions Progresses from Martia, grandmother of C. Julius Caesar, to Domitia, wife of Domitian. There are two plates with Hieroglyphic inscriptions on p. 120 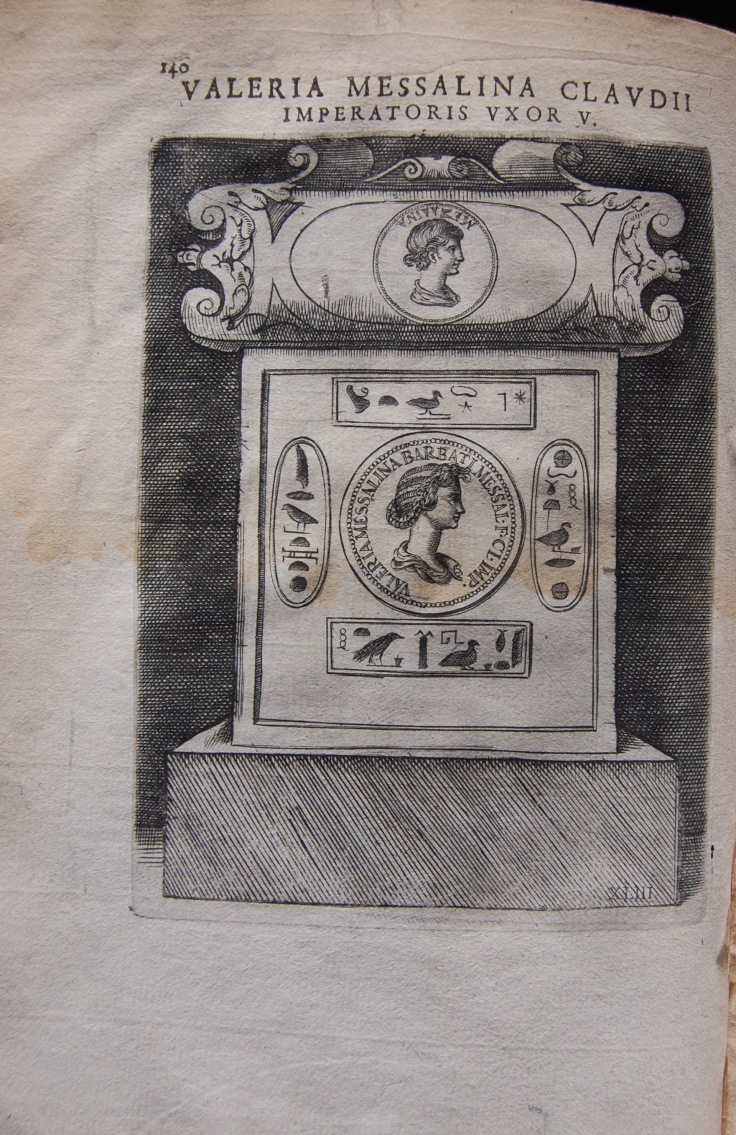 The OCLC catalogue entry suggests that these might be the first appearance of Hieroglyphics in print, I find this unlikely even for the 1558 edition.

Enea Vico was, according to Vasari ” the outstanding printmaker of his generation” an Italian draughtsman and engraver and nusmaticist. He was trained in Parma and by 1541 was in Rome, where he became a pupil of Tommaso Barlacchi ( fl 1527-42). In 1541-2, in collaboration with Barlacchi, he produced his first work, a series of 24 engravings with grotesque decorations in imitation of antique paintings (B. 467-90). In Rome, Vico was also influenced by the printmakers Agostino dei Musi, Antonio Salamanca and, above all, Marcantonio Raimondi. Vasari recorded that in 1546, following a short period in Florence, where he made engravings for Grand Duke Cosimo I de’ Medici after works by Michelangelo, Vico applied to live in Venice. He remained there until 1563, when he was summoned to the court of Alfonso II d’Este, Duke of Ferrara, where he lived until his death. Vico saw engraving and drawing as intellectual pursuits and not merely craftsmanly eterprise.  This is best expressed in his print ‘The Academy of Baccio Bandinelli, 1550’ “Vico conceived the artist’s workshop not as it must have looked but rather as a gentlemanly room peopled with industrious assistants in fashionable dress. Bandinelli himself appears at the extreme right in a garment adorned

with a badge of knighthood, a sign of the rank he had recently received from Charles V.
By equipping the studio with books and antiquities, Vico presents the making of art as an intellectual enterprise, and by naming the studio an “academy,” he associates it with Plato’s famous school. The foreground is strewn with classical statuary and human bones appropriate for anatomical study. Brilliant lamplight and flickering firelight cast evocative shadows and illuminate the figures bent over their work”  (http://www.metmuseum.org/toah/works-of-art/17.50.16-35)

This text is available online but the copy I offer has much more generous margins.https://books.google.nl/books?id=YToGo30oJPkC&printsec=frontcover&hl=nl&source=gbs_ge_summary_r&cad=0#v=onepage&q&f=false