Free Will ~ William of Auxerre, on Peter Lombard.

The first medieval theologian to develop a systematic treatise on free will, the virtues, and the natural law. 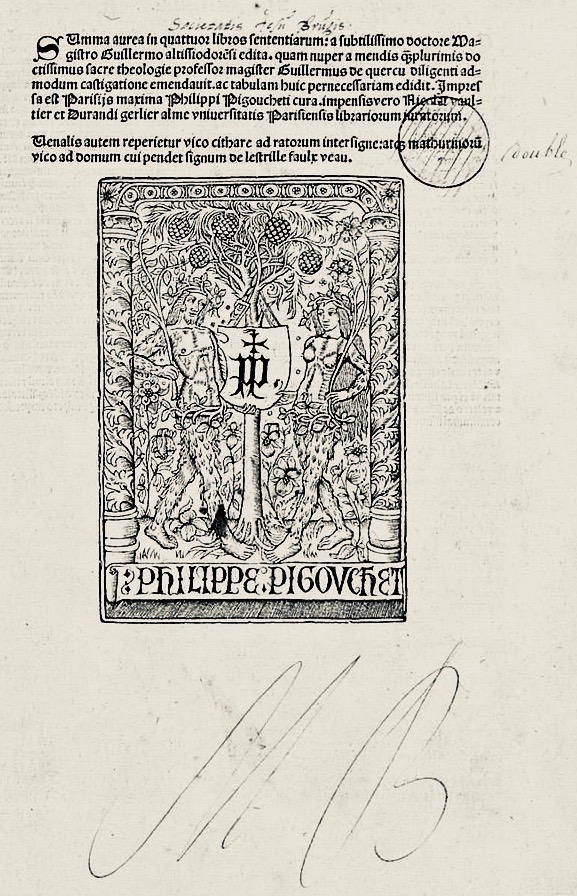 This is a wonderful copy which is well preserved. Bound in contemporary Flemish blind stamped calf over wooden boards, rebacked with old spine, endpapers renewed, manuscript author’s name on fore-edge.  Fine blind-stamped panelled calf over beveled wooden boards with pineapple stamps in lattice pattern, within a border of double eagle and round rose stamps. Clasps and catches missing the boards have metal strips .

Provenance:old ms. inscription ‘Societatis Jesu Brugensis’ on title page ; Bibliotheca Broxbourniana (1949) ; heraldic ex libris with the letters A and E of Albert Ehrman (motto: pro viribus summis contendo)  John Ehrman (1920 – 2011) received the library that his father Albert had started; he used a bookplate with the script “Bibliotheca Broxbourniana”  In addition to his historical scholarship, he worked to enhance his father’s library, and disposed of it by gift and auction sale in the late 1970s, ending with a final sale in 1978.

FIRST EDITION of the major work by William of Auxerre. In his commentary on Peter Lombard, William treats creation, natural law, the nature of man, a tripartite God, usury, end the Last Judgment, among other topics. He applies the critical reasoning of classical philosophy to his writing, He was an Archdeacon of Beauvais before becoming a professor of theology at the university in Paris. In 1231, he was made a member of the commission (the others were Simon of Authie and Stephen of Provins, both canons of Rheims)  appointed by Gregory IX to examine Aristotle’s writings on the natural sciences and to offer amendments where religiously necessary.   And “correct” the corpus of Aristotle and his Arab commentators (which had been banned at the university of Paris since 1210) and extirpate dangerous passages.  Contrary to the papal legate Robert of Courçon and other conservatives, who in 1210 condemned Aristotle’s Physics and Metaphysics as corruptive of Christian faith, William saw no intrinsic reason to avoid the rational analysis of Christian revelation. Confident of William’s orthodoxy, Gregory urged the King to restore him to the university faculty so that he and Godfrey of Poitiers might reorganize the plan of studies. William fell ill and died before any of these projects were begun.The work of the committee was never completed.

The Summa Aurea, written between 1215 and 1220, the Summa Aurea, is divided into  four books as a  commentary on the Sentences of Peter Lombard, that was an important precursor to Aquinas.  It contains an ample disquisition on usury and the natural law basis of economic matters.  William was one of the

first theologians to be influenced by Aristotle. Preceding as he did the Aristotelian revival, William was largely influenced by St. Augustine, St. Anselm of Canterbury, Richard and Hugh of Saint–Victor, and Avicenna.  He is considered the first medieval theologian to develop a systematic treatise on free will, the virtues, and the natural law. His Summa Aurea shows an intellectual awareness and insistence on the physical which had not been seen in earlier philosophers.  Both in method and in content it shows a considerable amount of originality, although, like all the Summæ of the early thirteenth century, it is influenced by the manner and method of the Lombard.  William was probably a student of the Parisian canon and humanist Richard of St. Victor  but the teacher  whom William was most profoundly influenced was Praepositinus, or Prevostin, of Cremona, Chancellor of the University of Paris from 1206 to 1209.  William was, in turn, the teacher of the Dominican, John of Treviso, one of the first theologians of the Order of Preachers. The importance of the “Summa Aurea” is enhanced by the fact that it was one of the first Summæ composed after the introduction of the metaphysical and physical treatises of Aristotle.

The Summa aurea, in four books, selectively treated such theological matters as God as one nature in three persons, creation, man, Christ and the virtues, sacramental worship, and the Last Judgment.

William’s emphasis on philosophy as a tool for Christian theology is evidenced by his critique of Plato’s doctrine of a demiurge, or cosmic intelligence, and by his treatment of the theory of knowledge as a means for distinguishing between God and creation. He also analyzed certain moral questions, including the problem of human choice and the nature of virtue.

William also wrote a Summa de officiis ecclesiasticis (“Compendium of Church Services”), which treated liturgical, or common, prayer, sacramental worship, and the annual cycle of scripture readings and chants. This systematic study served as the model for the late-13th-century noted work on divine worship, Guillaume Durand’s Rationale divinorum officiorum (“An Explanation of the Divine Offices”).

Open this link for a very good introduction to Guillermus