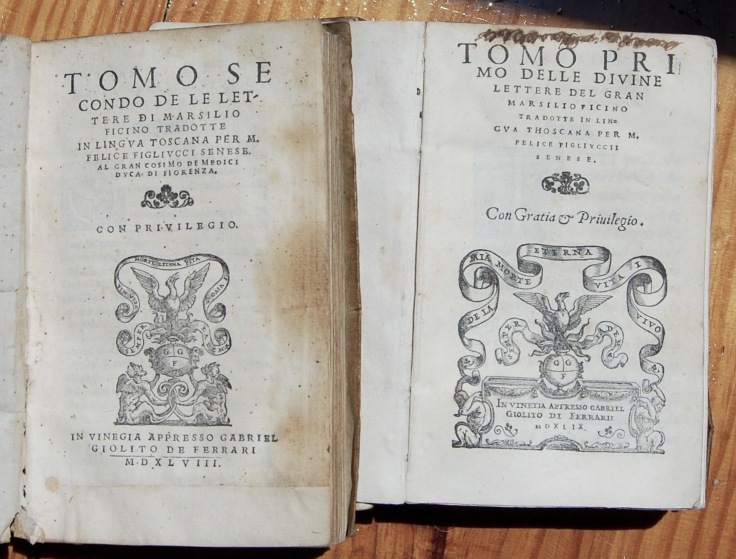 Second edition. These two volumes are both bound in limp vellum, although not matching and 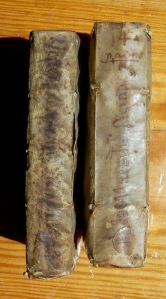 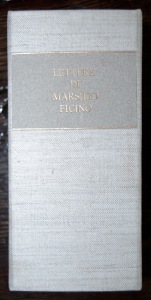 are stored in a custom folding box. Marsilio Ficino  directed the Platonic Academy in Florence, and it was the work of this Academy that gave the Renaissance in the 15th century its impulse and direction.
During his childhood Ficino was selected by Cosimo de’ Medici for an education in the humanities. Later Cosimo directed him to learn Greek and then to translate all the works of Plato into Latin. This enormous task he completed in about five years. He then wrote two important books, “The Platonic Theology” and “The Christian Religion”, showing how the Christian religion and Platonic philosophy were proclaiming the same message. The extraordinary influence the Platonic Academy came to exercise over the age arose from the fact that its leading spirits were already seeking fresh inspiration from the ideals of the civilizations of Greece and Rome and especially from the literary and philosophical sources of those ideals. Florence was the cultural and artistic centre of Europe at the time and leading men in so many fields were drawn to the Academy: Lorenzo de’Medici (Florence’s ruler), Alberti (the architect) and Poliziano (the poet).        Moreover Ficino bound together an enormous circle of correspondents throughout Europe, from the Pope in Rome to John Colet in London, from Reuchlin in Germany to de Ganay in France. Published during his lifetime,and Here in a more complete edition. These Letters reflect this great influence.

Following the Pazzi Conspiracy of 1478, Florence was at war with both the Pope (Sixtus IV) and King Ferdinand of Naples. Prompted by the appalling conditions under which Florence suffered as a result of the war, Ficino wrote eloquent letters to the three main protagonists. In his three letters to Sixtus, who was the main architect of the war, Ficino states in magnificent terms the true work of the Pope – to fish in the “deep sea of humanity”, as did the Apostles. King Ferdinand of Naples spent most of his life in intrigue, not only against other states, but also against his own barons. Yet, Ficino addresses him in the words of his father, the admirable King Alfonso. This extraordinary letter, written in the form of a prophesy, speaks of his son’s destiny on Earth. “In peace alone a splendid victory awaits you…, in victory, tranquility; in tranquility, a reverence and worship of Minerva” (wisdom). Negotiations for peace were in fact begun about five months later. In his letter to Lorenzo de ‘Medici, Ficino presented, with dramatic clarity, the two sides of Lorenzo’s nature. The letter may have prompted Lorenzo’s bold visit to King Ferdinand’s court and the ensuing negotiations for peace. In insisting on the reality of unity and peace in the face of war and division, Ficino uses a number of analogies. He speaks in at least two letters of all the colours emerging from simple white light, just as all the variety of the universe issues from one consciousness. “For the Sun, to be is to shine, to shine is to see, and to illuminate is to create all that is its own and to sustain what it has created.”