“They” (the Monks] “might be disposed occasionally to recreate their
minds with subjects of a light and amusing nature; and what could be
more innocent or delightful than the stories of the Gesta Romanorum’;”

Because its stories have

served as the basis for
countless other works of literature, the Gesta Romanorum is recognized as one of the primary sources of western European literature.

It is one of the greatest work in a genre popular during the late Middle Ages, the Gesta Romanorum is a collection of anecdotes, compiled anonymously and written in Latin, drawn from Eastern allegorical tales, legends collected by monks, classical narratives, and historical chronicles. Even though the title means “deeds of the Romans,” most of the stories in the Gesta Romanorum do not concern Rome or Romans. Originally designed for use by preachers in instilling Christian virtues and teaching theological doctrine, the tales in the Gesta Romanorum served as models for works by such authors as Giovanni Boccaccio, John Gower, Geoffrey Chaucer, William Shakespeare.

Some typical examples of these short stories are  cited by Joseph Albert Mosher are “how a clerk was saved by confession and penance from a compact with the devil; how a man was delivered for his piety; how certain tempting devils were vanquished; how a bishop was damned for neglecting God’s warning; [and] how a rich man was punished for robbing a poor widow.” The collection also includes many secular tales—for example, of Lear and his three daughters, of Pericles, of the three caskets, and of the pound of flesh. These were used by Shakespeare for plot lines in King Lear, Pericles, and The Merchant of Venice. Chaucer used the story of Constance in “The Man of Law’s Tale” in The Canterbury Tales 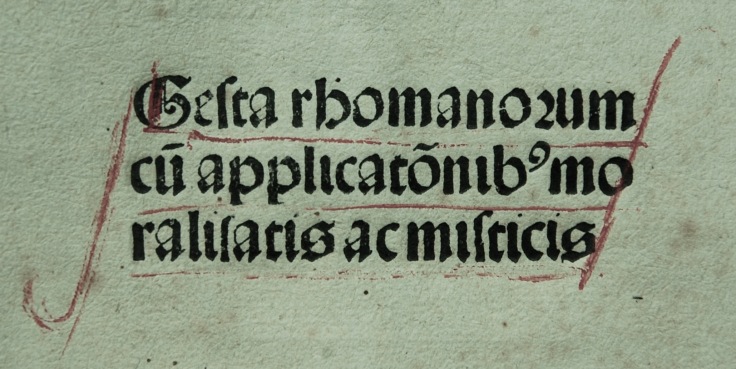 This copy is bound in original calf tooled in blind over wooden boards rebacked. Initials, capital strokes, paragraph marks, and underlining in red. Newer endpapers, over partially exposed original endpapers. Some minor worming throughout, mainly marginal. The final few leaves have a few more wormholes within the text, but text remains fully legible. A marginal closed tear to leaf n5, not affecting text. Leaves a bit wrinkled and some minor dampstaining to upper margin at the end. Overall a very good, clean copy

The Gesta Romanorum is “One of the best known collections of stories in Latin, the Gesta Romanorum is a medieval collection of anecdotes, to which moral reflections are attached. It was compiled in Latin, probably by a priest, late in the thirteenth or early in the fourteenth century. The ascription of authorship to Berchorius or Helinandus can no longer be maintained. The original objective of the work seems to have been to provide preachers with a store of anecdotes with suitable moral applications. Each story has a heading referring to some virtue or vice (e.g. de dilectione); then comes the anecdote followed by the moralisatio. The collection became so popular throughout Western Europe that copies were multiplied, often with local additions, so that it is not now possible to determine whether it was originally written in England, Germany, or France. Oesterley, a  critical editor (Berlin, 1872), is of the opinion that it was originally composed in England, whence it passed to the Continent, and that by the middle of the fourteenth century there existed three distinct families of manuscripts: the English group, written in Latin; the Latin and German group; and a third group represented by the first printed editions. The manuscripts differ considerably as to number and arrangement of articles, but no one manuscript representing the printed editions exists. Probably the editors of the first printed edition selected 151 stories/chapters  from various manuscripts.

Shortly after this collection had been published, an enlarged edition, now known as the Vulgate, was issued, containing 181 stories*. This was compiled from the third group of manuscripts, and was printed by Ulrich Zell at Cologne. Though the title of the work suggests Roman history as the chief source of the stories, many of them are taken from later Latin and German chronicles, while several are Oriental in character. In estimating the wide influence of the ‘Gesta’ it must be remembered that the collection proved a mine of anecdotes, not only for preachers, but for poets, from Chaucer, Lydgate, and Boccaccio down through Shakespeare to Schiller and Rossetti, so that many of these old stories are now enshrined in masterpieces of European literature.” (CE vol. VI, page 539-540)

A. The editio princeps, printed in folio by Ketelaer and De Leempt, at Utrecht. Date uncertain. It contains 150 (not 152, as Douce erroneously says*) chapters.f

(a) A second edition of the editio princeps, printed by Arnold Ter Hoenen, at Cologne. Date uncertain. It contains 151 chapters.

B. The Vulgate (vulgartext), or second editio princeps, printed by Ulrich Zell, at Cologne. Date uncertain. It contains 181 chapters.
Subsequent to the Vulgate numerous editions were printed resembling it in all essentials.
There is no doubt, according to Herr Oesterley, that all three editions [A, (a), & B] appeared between 1472 and 1475.

Here as an english translation of an excerpted story, as you read you can see the immensely enjoyable use of language and rhetorical tropes which make the stories so amusing.

A CERTAIN tyrannical and cruel knight retained in his service a very faithful servant. One day, when he had been to the market, he returned with this servant through a grove; and by the way lost thirty silver marks. As soon as he discovered the loss, he questioned his servant about it. The man solemnly denied all knowledge of the matter, and he spoke truth. But when the money was not to be found, he cut off the servant’s foot, and leaving him in that place, rode home. A hermit, hearing the groans and cries of the man, went speedily to his help. He confessed him; and being satisfied of his innocence, conveyed him upon his shoulders to his hermitage.

Then entering the oratory, he dared to reproach the All-just with want of justice, inasmuch as he had permitted an innocent man to lose his foot.

For a length of time he continued in tears, and prayers, and reproaches; until at last an angel of the Lord ‘appeared to him, and said, “Hast thou not read in the Psalms, ‘God is a just judge, strong and patient?’”

“Often,” answered the hermit meekly, “have I read and believed it from my heart; but to-day I have erred. That wretched man, Whose foot has been cut off, perhaps under the veil of confession deceived me.”

“‘Tax not the Lord with injustice,” said the angel; “His way is truth, and His judgments equitable. Recollect how often thou hast read, ‘The decrees of God are unfathomable.’ Know that he who lost his foot, lost it for a former crime. With the same foot he maliciously spurned his mother, and cast her from a chariot–for which eternal condemnation overtook him. The knight, his master, was desirous of purchasing a war-horse, to collect more wealth, to the destruction of his soul; and therefore, by the just sentence of God, the money which he had provided for the purchase was lost. Now hear; there is a very poor man with his wife and little ones, who daily supplicate heaven, and perform every religious exercise. He found the money, when otherwise he would have starved, and therewith pro­cured for himself and family the necessaries of life, entrust­ing a portion to his confessor to distribute to the poor. But first he diligently endeavoured to find out the right owner. Not accomplishing this, the poor man applied it to its proper use. Place then a bridle upon thy thoughts; and no more upbraid the righteous Disposer of all things, as thou but lately didst. For he is just, and strong, and patient.”

“The Stories of the Gesta seem to have been a mine for later writers, like Chaucer, Shakespeare, and Schiller.” (Mediaeval Latin, 1925. p 432).

Goff Lists 17 editions, and I’ve locate two others of the latin versions.

I found these three books (electronically on Hathi Trust) quite informative.

Illustrations of Shakespeare and of ancient manners : with dissertations on the clowns and fools of Shakespeare ; on the collection of popular tales entitled Gesta Romanorum, and on the English Morris dance  (London : Printed for T. Tegg, 1839), by Francis Douce

The history of English poetry, from the close of the eleventh to the commencement of the eithteenth century. To which are prefixed, two dissertations. I. On the origin of romantic fiction in Europe. II. On the introduction of learning into England. (London, J. Dodsley; [etc., etc.], 1775-), by Thomas Warton