ON 22 June, 1535   He was declared guilty, and condemned to be hanged, drawn, and quartered at Tyburn, but the mode of execution was changed, and instead he was beheaded on Tower Hill.

“He is the one man at this time who is incomparable for uprightness of life, for learning and for greatness of soul”

Fisher became the confessor to Lady Margaret Beaufort, the mother of Henry VII. He gained fame in Western Europe for his well-constructed arguments against Martin Luther though he himself was a reforming Humanist. Fisher was a stout defender of the doctrine of the Catholic Church but also believed, like Sir Thomas More, that some areas of day-to-day practice within the Church should be reformed. However, Fisher wanted this reform to come from the Catholic Church itself and condemned the Protestant movement and all it stood for.

When it first became known that Henry VIII was planning ways in which to divorce Catherine of Aragon, Fisher made it clear that he totally opposed such moves. He helped Catherine plan her defence and schooled her in Canon Law. Fisher produced seven publications condemning the impending divorce. He also led those in Convocation who believed that Henry was legally married to Catherine – in direct opposition to those who believed that the marriage was illegal – a ploy Henry was trying to use to justify his call for a divorce. Fisher made his stand very clear in the House of Lords – the marriage was legal and a divorce was illegal and the king had no right to push ahead with it.

Fisher was playing a very dangerous game. He made his position even more dangerous when he secretly contacted Charles V to appeal to the Emperor to use force against Henry.

In April 1534, Fisher refused to take the oath required by the Succession Act. This required Fisher to take an oath that repudiated the Pope, that declared invalid the marriage between Henry and Catherine of Aragon and acknowledged that the children of Henry and Anne Boleyn would be the legal heirs to the throne. Several attempts were made to get Fisher to swear the oath but he refused. Under the newly passed Treason Act, his refusal was construed as treason and Fisher was put on trial charged with a crime that carried the death sentence. It was at this time that Pope Paul III made Fisher a Cardinal – a move that infuriated Henry and almost certainly condemned him to death (if he had not been already).

So Today I have two of Fishers books bound together to offer, these two books undoubtedly endangered Fisher.

These two books are both large copies (many decked edges) and are clean. It is bound in modern full calf in an antique style.
In 1525, a strange and inaccurate rumor had been circulating in Europe that the English monarch, Henry VIII, was becoming sympathetic to Lutheran ideas. Following Luther’s attack upon the monarch, and the compromise in which the King found himself because protocol denied the right of reply from a monarch to a commoner, Thomas More was asked to write a defence and produced the Renaissance anti-Lutheran polemical work,  “Responsio ad Lutherum.” At around the same time (1525), John Fisher produced a series of theological treatises, both bound together in this volume, that critically examined the basic tenets of Lutheranism: “Defensio regie assertionis contra Babylonicam capituitatem” and the “Sacri sacerdotii defensio contra Lutherum.” The first is a defense of Henry VIII against Luther’s attack that qualifies him, according to Fisher in this work, as a philosophic king in the Platonic tradition. The second work, “Sacri sacerdotii defensio contra Lutherum” is a defense of the priesthood by arguments in favor of tradition against innovation and a divine sanction of the priesthood Luther’s reply to Henry VIII’s “Assertio” was the “Babylonian Captivity” which is perhaps one of the most scurrilous pieces of theological polemic on record.  It was felt that it would be beneath the dignity of the monarch to engage in further debate with the ribald Luther, and so both Fisher and Sir Thomas More were persuaded to come to his rescue.  This resulted in Fisher’s “Defence of the Assertions of the King of England against Luther’s Babylonian Captivity.” (the first work here) 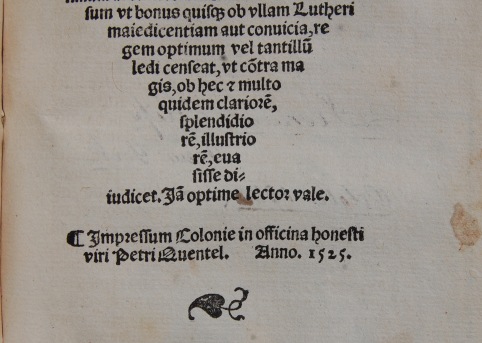 The printing of this work was delayed by reports of a possible reconversion of Luther, but when this proved to be unfounded, the book was finally published in Cologne in 1525. The “Defensio” was a short book and concentrated on Luther’s denial of the Church’s doctrine on the Eucharist. Simultaneously with the “Defensio,” Sir Thomas More was writing his reply to Luther’s diatribe under the pseudonym Gulielmus Rosseus. He had obviously read Fisher’s work before he published his own. In his “Responsio ad Lutherum” he writes:
“The Reverend Father John Fisher, Bishop of Rochester, a man illustrious not only by the vastness of his erudition, but much more so by the purity of his life, has so opened and so overthrown the assertions of Luther, that if he had any shame he would give a great deal to have burnt his assertions.” Fisher wrote well in defense of the Pope as is evident from the effect his “Confutatio” against Luther had on St. Thomas More. In a letter to Cromwell (1534) More admitted that he had at one time thought the Pope’s supremacy was of merely ecclesiastical and not of divine institution. Yet after reading Fisher’s work he was able to write in his “Responsio”: “As regards the Primacy of the Roman Pontiff, the bishop of Rochester has made the matter so clear from the Gospels, the Acts of the Apostles, and from the whole of the Old Testament, and from the consent of all the holy Fathers, not of the Latins only, but of the Greeks also (of whose opposition Luther is wont to boast), and from the definition of a general council . . . that it would be utterly superfluous for me to write again on the subject.”   “An eminent spiritual figure in the circle around Thomas More, Fisher preceded More to the scaffold; on June 22, 1535, he was executed for refusing to take the oath required of him in the administration of the Act of Succession. [Fisher’s head was on display on London Bridge for two weeks. When it was removed and thrown into the river, it was replaced with More’s own.] On May 19, 1935 Fisher was canonized in Rome with More.” (Contemporaries of Erasmus).