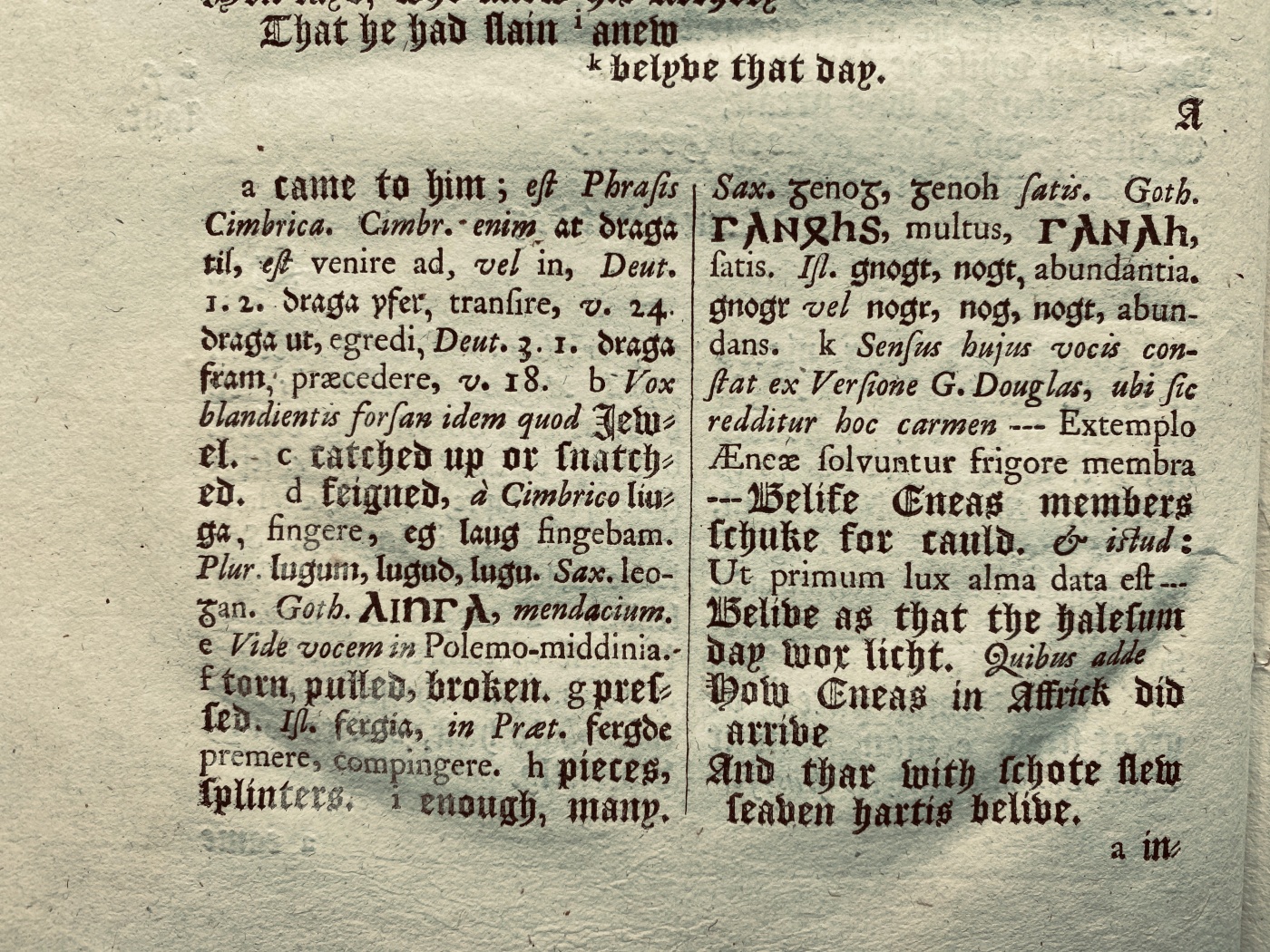 The Polemo-Middinia is the most Outstanding of British Macaronic poems.

Drummond subjected Scots dialect to Latin grammatical rules. “A remarkable anomaly in the Scottish print culture of the period, the poem’s appearance in the years of ‘the troubles’ sheds new light on Drummond’s political and intellectual position at this time, as well as his diversity as a writer.” David Stevenson 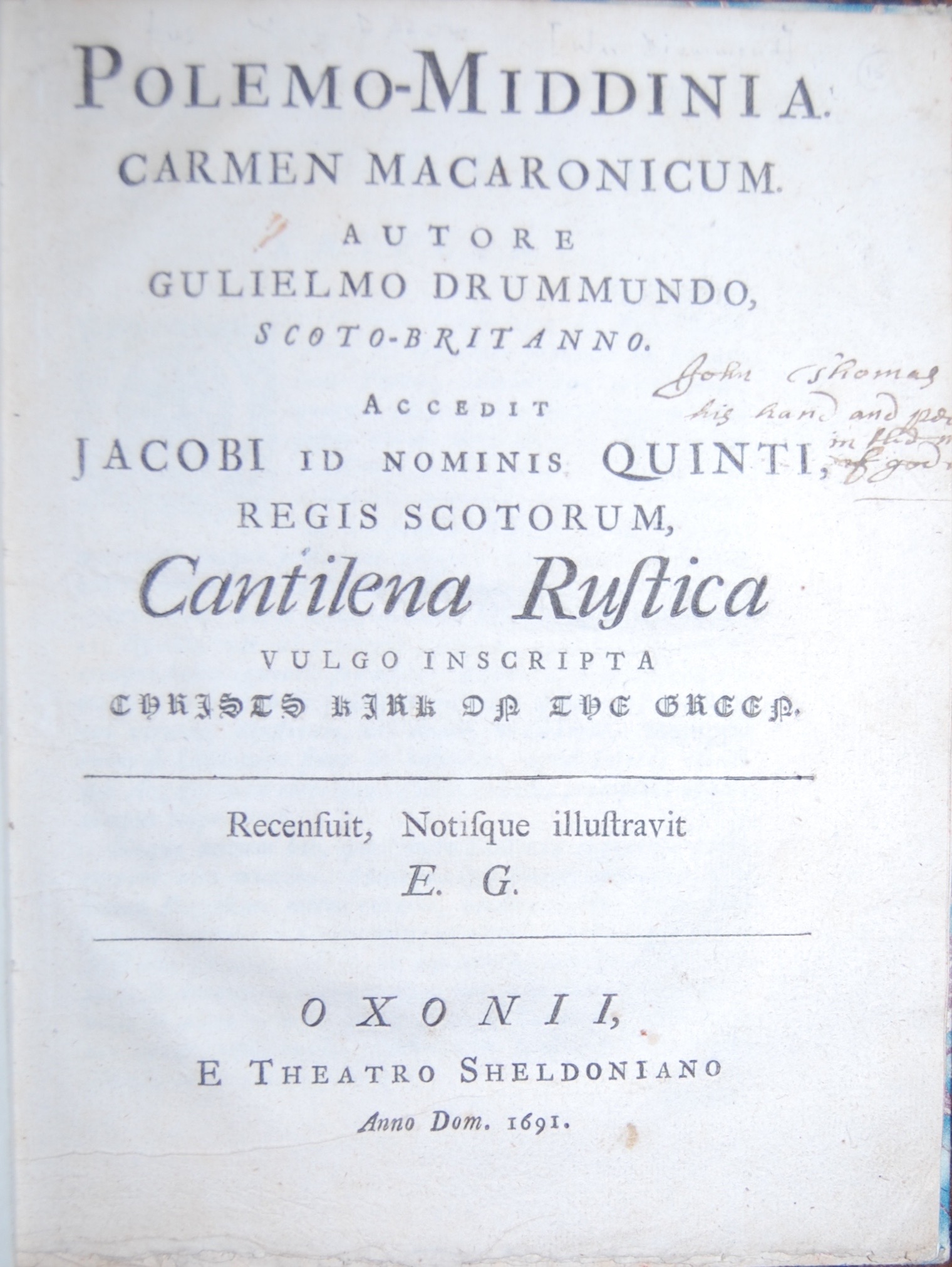 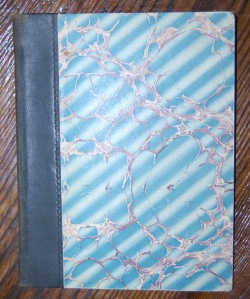 quarter calf, this is a very clean copy. The preface and notes by Edmund Gibson are in scholarly Latin, the piece attributed to Drummond in macaronic Latin (text using a mixture of languages,particularly bilingual puns), the piece attributed to James V in English; the Polemo-Middinia describes a fight between tenants of two Scottish manors. For attribution of the Polemo-Middinia to Drummond see Masson, David, Drummond of Hawthornden, London, 1873, p. 476 et seq.; attribution of Christs Kirk to James V extremely doubtful, according to DNB. Polemo-Middinia first printed Aberdeen, ? 1650-1670? ( only two copies known); also previously printed Edinburgh, 1684 (one copy at the National Library of Scotland), with title beginning Breviuscula, & compendiuscula, tellatio. “Christ’s Kirk on the green” in English. Also attributed to Samuel Colvil.William Drummond is the last significant figure in Scottish poetry before the Eighteenth Century. The gap between him and Alan Ramsay indicates a crisis in Scottish literary culture

brought on by the departure of the Scottish court to London with the accession of James VI of Scotland to the throne of Great Britain. James had been a patron of poets, dabbled in poetry himself and delivered himself of Rewellis and Cautelis [Do’s and Don’ts] for its composition. Not only had the court been a centre of literary activity where men of letters such as Drummond’s uncle, William Fowler, and his friend William Alexander of Menstrie, later Earl of Stirling, gained employment, it had also given authority to Scots as a literary language. These conditions were now abolished. Poets who had published their work in Scots, followed James in revising it and publishing it in English, and Drummond, who did not go south with the court, was left in a state of cultural bereavement. He made a lot of that melancholy state: becoming a poet of retreat and death, like Henry Vaughan during the Interregnum.

The Polemo-Middinia describes a fight between the tenants of Scot of Scotstarvet and those of his neighbor, Cunningham of Barns. Cf.  This macaronic poem was written by Drummond for his friends and not published by him, this is one of a very few humorous poems by Drummond, it is also quite a technical feat. The word macaronic comes from the New Latin macaronicus which is from the Italian maccarone (“dumpling”, regarded as coarse peasant fare). The term can have derogatory overtones, and is usually reserved for works where the mixing of languages has a humorous or satirical intent or effect. It is a matter of debate whether the term can be applied to mixed-language literature of a more serious nature and purpose. That Drummond chose this form for his entertaining of his friends , gives us a nice glimpse of Drummond’s true character.  Drummond was born in 1585, the eldest son of John Drummond, descended through a cadet branch from the Drummonds of Stobhall, Lords Drummond of that ilk since 1471, and of Susannah Fowler, daughter of a well-connected Edinburgh burgess. John Drummond acquired the property of Hawthornden, where the North Esk runs through a romantic gorge near Dalkeith, and was made gentleman usher at the court of James VI in 1590. William Drummond was educated at the High School in Edinburgh and at Edinburgh University, where he graduated MA in 1605. He completed his education by travelling to France, visiting Paris and studying law at Bourges. On the way out and on his return in 1609, he stayed in London. He became laird of Hawthornden on the death of his father in 1610 and thereafter seldom left his estate, where he dedicated himself to literary pursuits, accumulating an excellent library and rebuilding the house as a Scots baronial mansion.Like everyone else he published a lament on the death of Prince Henry in 1613, “Teares on the Death of Moeliades”. Poems followed in 1614; most of these were included and revised in the 1616 edition, whose first part is a celebration of a love for Auristella and the second a mourning of her death. The “Teares” for Prince Henry is included and there are additional madrigals and epigrams, but the main body of the collection is a two part series of sonnets and songs like Sir Philip Sidney’s Astrophil to Stella and Sir William Alexander’s Aurora.

Drummond was a late practitioner of the Petrarchian sonnet sequence in English, but he worked in phrases and ideas of the French and Italian masters of late petrarchism. Marino was an author he admired and imitated. The language he writes in is not the Scots he spoke but a literary English, as correct as he could learn to make it from reading books. His art aims at refined sweetness both in versification and in the preciosity of his reworking and tinkering with petrarchan imagery. The landscape of his love-melancholy is a solitary and Arcadian Midlothian. On this colde World of Ours, Flowre of the Seasons, Season of the Flowrs, Sonne of the Sunne sweet Spring, Such hote and burning Dayes why doest thou bring? (Madrigal vi, ll. 1-4, Poems, Part 1) The love affair he writes about so artificially has a very oblique relation to his life. His Auristella has at least some connection with Euphemia Cunningham, who lived by the Ore, or Ora as he has it, in Fife. Like Poe, Drummond seems to have felt that the death of a beautiful woman was the best subject for poetry and Euphemia Cunningham did her best for him in this respect. Only a year after he had completed the Poems that end in mourning her literary epiphany. Religion was another source of melancholy interiority that he exploited; he expanded the divine poems of the 1616 collection and brought them out as Flowres of Sion in 1623. 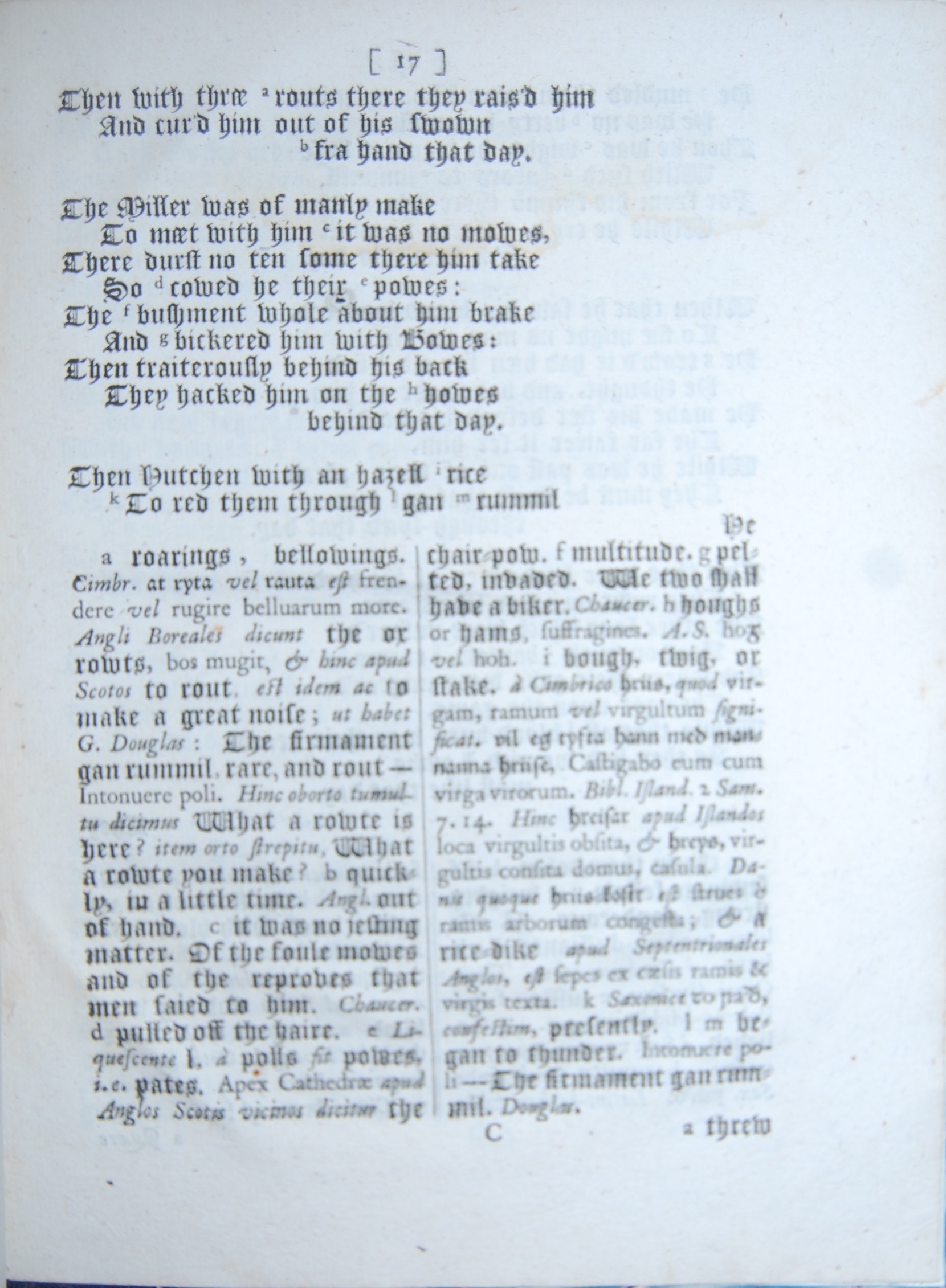