Quartoπ2 A-R4.(lacking R4 most likely Blank ,as the only other copy I found does not have a page)   Most likey the first and only edition

This copy is bound in a 13th century manuscript leaf, from a Bolognese manuscript of the Liber Extra.  There is damage on the margins of the first five

signatures, not effecting the text.Expertly repaired. The binding has been professionally  stabilized and is quite serviceable.
Ther are deckel edges suggesting this is the original sewing and binding. Alexandro Farnesio S. R. E. Cardinali ac Vicecancellario digniss. studiosorum perpetuo Mecoenati. Antonius de Matthaei foelicitatem. I could not find out anything about Antonio Mattei.

Octavo, 4 X 6 inches. A-L8 This copy is bound in its original limp vellum binding, with the book plate of Los Angeles Law Library. It is a very nice copy.

Elenus: Jerome E. . (Elen or Eelen), Dutch lawyer, philologist and methodologists, born probably around 1520-25 to Baelen in Kempen, died at Antwerp in 1576 His father, Andrew Elen., is praised by him as a capable grammarian; he gave his son his first lessons. Jerome went afterwards to Louvain, where Rescius in Greek and Nannius taught in Latin, and where he studied philosophy with special affection; he belonged to the Pädagogium Castrum, and was issued a MA in 1542. In addition, he studied Law, but seems to have satisfied it with the Licence. Mudäus had then held the chair of institutions, and through him the reformed law was introduced to the old Brabant College; Then he went to Orleans, where he worked with Joachim Hopper joined a close bond of friendship. From there they both went to Paris; Elen. heard here the lectures of the then famous John Straselius (from Strazeele at Bailleul), the Demosthenes interpretirte among others. Back in Leuven, Elen He taught lessons in philology and in the jurisprudence. During the latter part of his life he worked in Antwerp as a lawyer. It was here that he wrote his notes on Institutiones Juris Canonici of the Lancelotti, Antwerp in 1566, and This book the “Diatribarum immersive Exercitationum ad jus civile”, Antwerp, Plantin 1576; This work is included in Otto’s Thesaurus Vol II The first book contains an interesting methodological writing, “Orationes tres de ratione juris studii”; the second number of smaller treatises on various points and issues of the Roman law; the third a rhythmic Paraphrasirung of all the fragments of the title De regulis Juris. – These documents are written in Leuven; Elen. referred to themselves as “non si magni momenti, indignas saltem, quae a tineis et Blattis corroderentur”. Therefore, he decided to collect them and publish. – The little work is dedicated (1574) has been the Brussels Ammann Anton van Oss, Lord of Over-and Nederembeek, Castellan of Vilvoorde, a famous man, the mayor of Brussels and head of the local Spanish party; he was Elenus’ youth comrade and whose father had been his teacher. 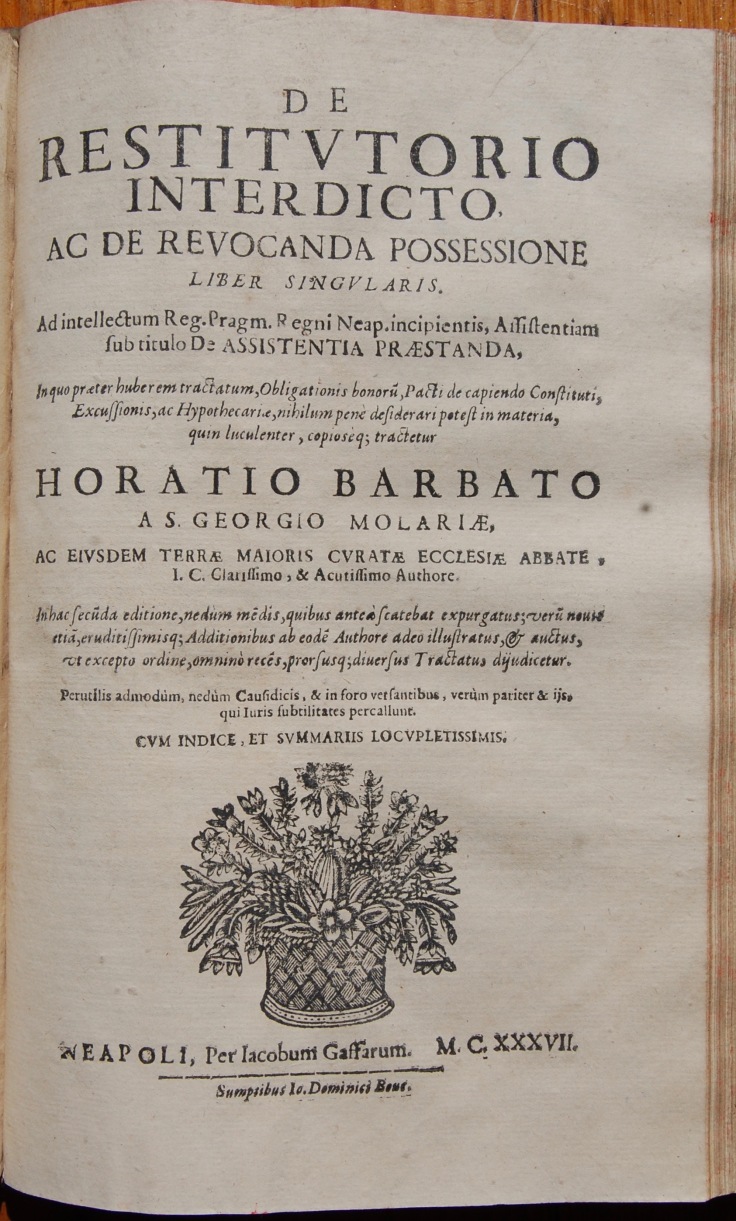 These three folio volumes are bound in 17th century full green reversed calf, the spine has been eroded, but the binding is strong and solid.

These three books relate in more than a local way,they all deal with ‘material rights’.

The first, poor law, the second wills and the third is on restitution of property.