Originally written  in Arabic between 1187 and 1190 the Aphorisms of Maimonides, a digest of the teachings of Galen organized in 25 “particulae”, are in an anonymous thirteenth-century translation from the Arabic. They provides tantalizing insights into the work of Galen, as it draws on treatises of Galen that no longer exist and shines a light into the world of medieval and ancient medicine .
This “Book is based almost entirely on rational medicine, independant observation and the scientific method” (The Medical Legacy of Moses Maimonides. Fred Rosner 1998)

Maimonides, like his Arab precursors and contemporaries, considered himself one of the inheritors of classical Greek learning. Like some of them, eg, al Farabi and Razi among the Arabs, and Rabbi Schem Tov among the Jews, Maimonides did not accept this inheritance uncritically, and much space is given to showing the inconsistencies in Galen’s writings and in making a plea for rational observation. (These preceded the similar plea by Roger Bacon by half a century. Both were ignored.)

Part II consists of Johannes Damascenus, Aphorismi; Mohammed Rhasis, De secretis in medicinis; and pseudo-Hippocrates, Capsula eburnea. This last is a brief treatise on the external signs of impending death. According to its introduction, Hippocrates asked his servants to bury with him an ivory chest in which he had placed certain medical secrets. Learning of this, Caesar ordered the tomb to be opened and the chest removed, revealing this treatise. It is printed in the Latin translation made from an Arabic version by Gerard of Cremona in the twelfth century. It had already been printed in Milan, 1481,(Goff R175) in the supplement of miscellaneous medical tractates added to the first edition Rhasis, Liber ad Almansorem ..

This edition includes the aphorisms of Johannes Damascenus or Mesue, a ninth-century Baghdad physician responsible for the translation of Greek medical works into Arabic. Ibn Zuhr (Avenzohar)’s short treatise De curatione lapidis appears here in print for the first time.

Maimonides was born in Cordova but when driven out of Spain for refusing to convert to Islam he settled permanently in Cairo. His erudition and medical skill earned him the appointment of physician to the court of Saladin, the sultan of Egypt. His medical writings deeply influenced not only Muslim and Jewish but also Christian doctors, for example Henry of Mondeville and Guy de Chauliac. From 1177, Maimonides was head of the Jewish community of Egypt. This work, created towards the end of his life, was originally written in Arabic, then translated into Hebrew in the thirteenth century, and into Latin to be published in print.  It is the most important and influential work of the most revered early Jewish physician. 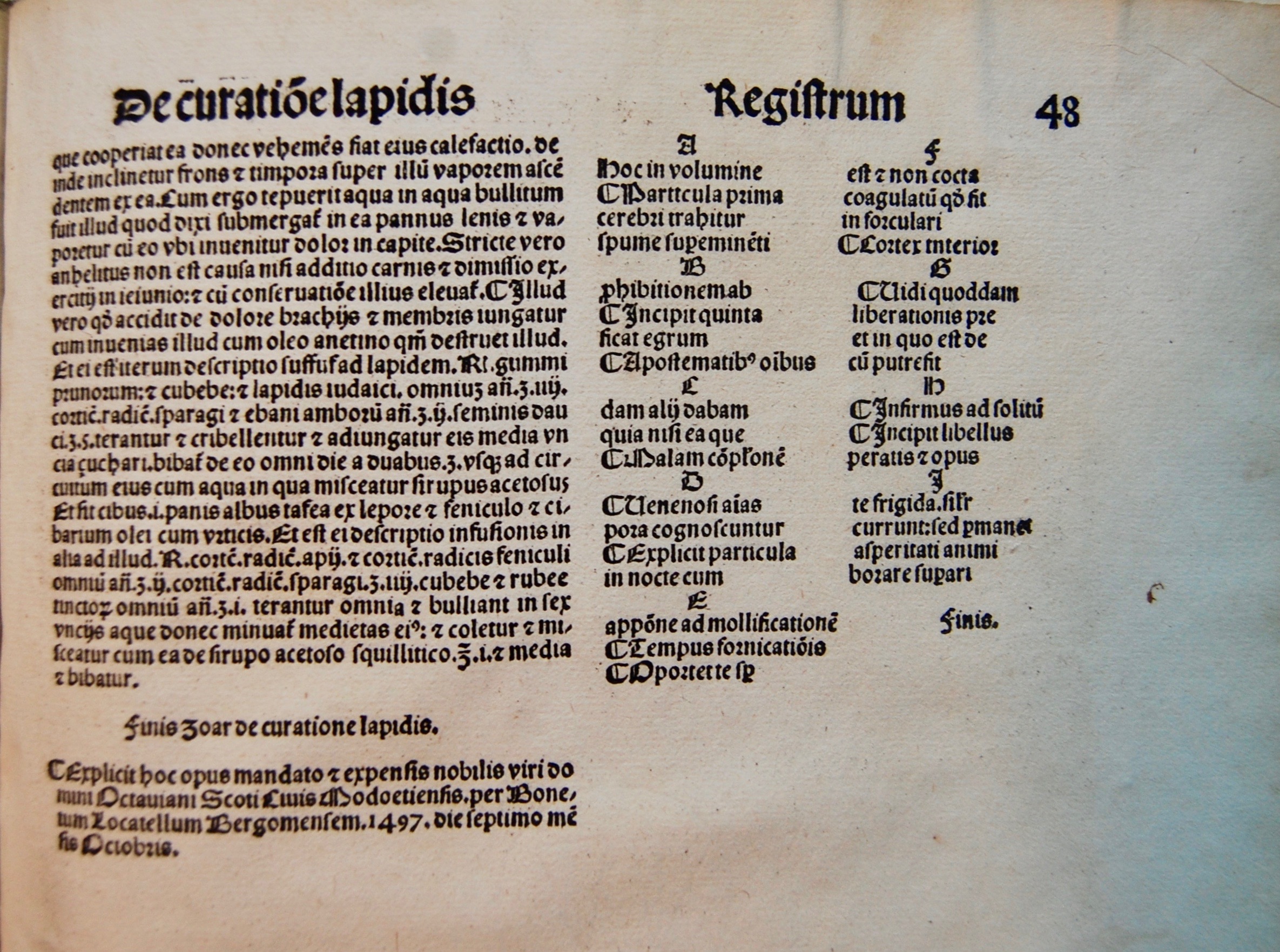 ISTC 4 copies listed in the US The Newberry Library; Western Michigan Univ., Free Library of Philadelphia (-8 leaves); Library of Congress.

This is a very nicely rubricated copy with many large lombard initials in red and the capital stroked in red and each chapter has a leather tab, This copy is bound in original quarter 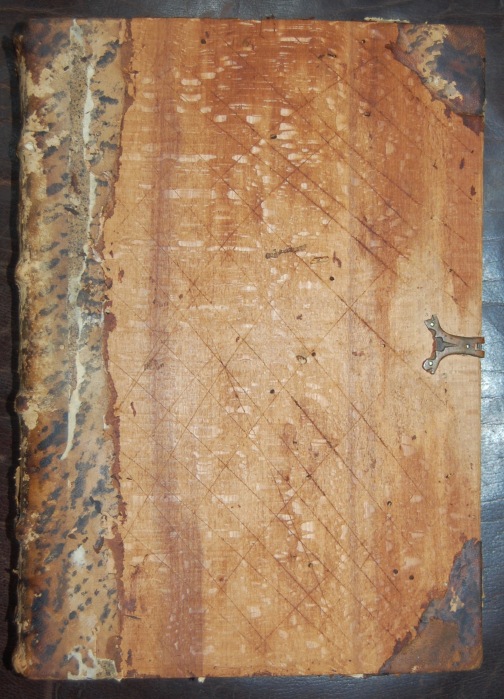 calf over Oak Boards, the clasp has been lost but the remains of the leather flap and the brass catch remains. Compiled from the works of Saint Bernard by Guilelmus Tornacensis, Benedictine monk.

It’s hard to know how to characterize Bernard of Clairvaux. On the one hand, he is called the “honey-tongued doctor” for his eloquent writings on the love of God. On the other hand, he rallied soldiers to kill Muslims. He wrote eloquently on humility; then again, he loved being close to the seat of power and was an adviser to five popes. What Bernard is remembered for today, more than his reforming zeal and crusade preaching, is his mystical writings. His best known work is On Loving God, in which he states his purpose at the beginning: “You wish me to tell you why and how God should be loved. My answer is that God himself is the reason he is to be loved.” 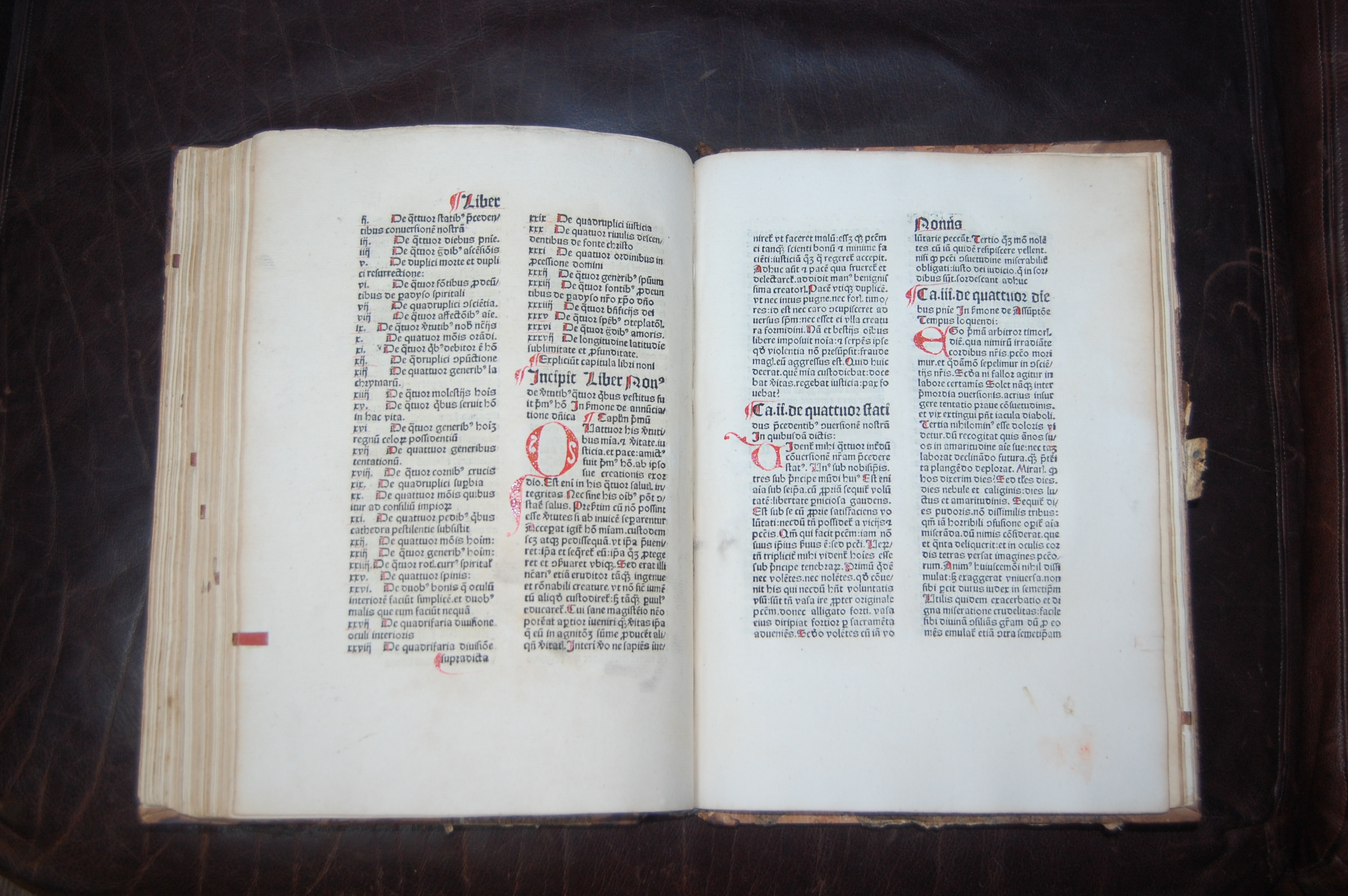 His other great literary legacy is Sermons on the Song of Songs, 86 sermons on the spiritual life that, in fact, only tangentially touch on the biblical text. One passage in particular speaks aptly to Bernard’s lifelong passion to know God (and, likely, the temptations that troubled him):