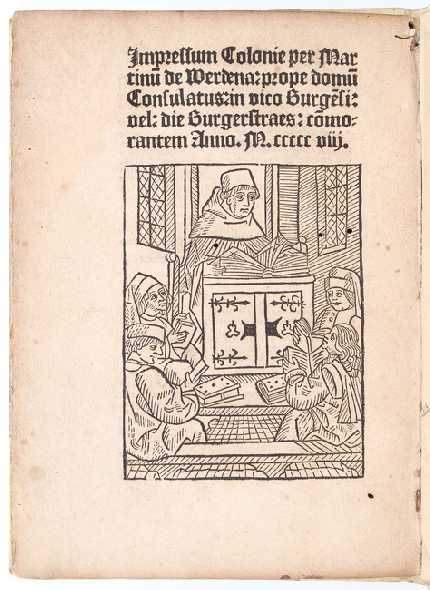 Bound in modern boards. With a three-quarter-page woodcut of the author instructing his pupils from a lectern in his university studium. A nice copy with a little worming in the gutter, not affecting the text, and three pinprick wormholes. Title very lightly spotted.

An early edition (1st 1496), and the only edition with the woodcut of the author instructing his students, of this work on writing poetry by the important Silesian poet Laurentius Corvinus (born Laurentius Rabe and known in Polish as Wawrzyniec Korwin), well-known to historians of science as the man who assisted Copernicus in his first publication, a Latin translation from the Greek of the letters of Theophylactus, for which Corvinus provided two poems, one of which mentions Copernicus’ interest in astronomy.

Corvinus was an important humanist poet and scholar with a deep knowledge of classical literature and philosophy. “Corvinus matriculated at the University of Cracow in 1484, received the bachelor’s degree around 1486 and the master’s in 1489. He advocated Italian Renaissance humanism, came under the influence of the poet Conrad Celtis and joined the humanist circle known as the Sodalitatis Vistulana. Aside from teaching classical poetry [esp. Vergil], he also lectured or led exercises on Peter of Spain’s ‘Tractatus’, Aristotle’s ‘Posterior Analytics’, and ‘De Anima’, Thomas Aquinas’ ‘De Ente et Essentia’, and Boethius’ ‘De Consolatione Philosophiae’. His first publications, however, were on geography, so he is representative of humanists in Cracow with mathematical interests, much like Copernicus himself… Among his most notable works is a didactic poem, ‘Carmen elegiacum de Apolline et novem Musis’ (1503), that demonstrates an acquaintance with Greek, the strong influence of Neoplatonic philosophy, and a connection with astronomy at Cracow.”(Goddu, Copernicus and the Aristotelian Tradition, p. 42-3)

In his ‘Structura Carminum’ Corvinus presents the prosody and structure of Latin verse, supplementing his text with stylistic illustrations and references. Corvinus based his work in part on Conrad Celtis’ theories of poetry as set forth in his ‘Ars versificandi’ (1486). But what is remarkable about Corvinus’ work is his use of his own poetry (including some love poems and others depicting the daily events of academic life at Cracow) as exempla throughout. There are more than 20 poems, occupying about three quarters of the entire text. For a full discussion of the method, structure, and content of Corvinus’ book, see Jacqueline Glomski, “Poetry to Teach the Writing of Poetry” (full citation below.)

Although Corvinus only published his work after his return to Silesia, the book is addressed to his students at the University of Cracow, indicating that he had started working on it while still in Poland, moreover, “Corvinus inserted samples of his own poetry depicting the daily events of academic life, with one of the poems specifically naming another member of Celtis’ literary circle, Sigismund Fusilius.”(Glomski, 15th c. Humanism in Poland)

VD 16, C 5453; IA 145.627; Estreicher XIV, 420; Goluszka-M. P 205 See: Jacqueline Glomski, “Poetry to Teach the Writing of Poetry”, in Poets and Teachers: Latin didactic poetry and the didactic authority of the Latin poet from the Renaissance to the present: (Proceedings of the Fifth Annual Symposium of the Cambridge Society for Neo-Latin Studies, Clare College, Cambridge, 9-11 September, 1996)/ Edited by Yasmin Haskell and Philip Hardie. Also, “Laurentius Corvinus and the Flowering of Central European Humanism”, Terminus ix (2007), pp. 49-74