Folio   A6 B8 C-Z6 AA6 Bb4 Cc6.    There are numerous handwritten annotations in ink (marginal and interlinear, ff. IX-XIX). The binding of half-calf with corners of the XIXth, back with 4  sewing support with pieces of title of red and green leather, dishes covered with stony marbled paper. { A typical Kloss binding} (there is a  tear sig. B1, with loss; first signature  cut shorter at the lower margin; restorations of paper with the last sheets in the upper margin; Yet this copy remains a beautiful illustrated edition of the comedies of Terence with comments by Aelius Donatus and Calphurnius. From the presses of the famous and prolific Strasbourg printer-publisher Johann Reinhard, known as Grüninger, it is remarkably illustrated 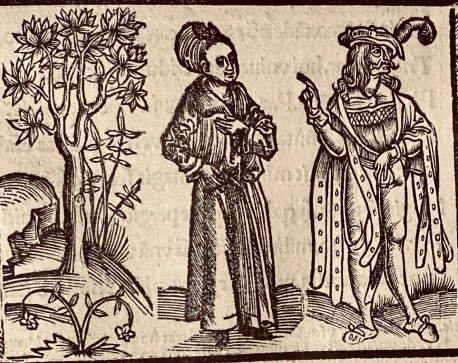 with 7 large full-page woods (including the famous representation of a theater on the title), woodcuts depicting the dramatis personae in a land- or cityscape, one at the beginning of each play, and 142 woods in the text 19 of the cuts appear here for the first time; the others are from the 1496 ed. «Grüninger’s illustrations, intended to

clarify the complexities of Terence’s plots for the reader, act as visual mnemonic devices for the book’s anticipated student audience. This is demonstrated especially in the full-page woodcut that begins each play, where all of the characters are displayed with connecting lines to indicate their interrelationships. A verbal explanation and plot summary accompanies each of these illustrations. The most remarkable feature of Grüninger’s Terence is his use of small interchangeable woodcuts that were combined to create the individual scene illustrations for each play. Individual blocks were cut for most of the characters of the six plays, who are identified by name in overhead banners. The blocks were cleverly combined repeatedly in groups of two to five, sometimes together with cuts of trees and buildings, to create the illustrations. Grüninger was attempting to use the woodcuts as repeatable and combinable objects, much in the same manner as movable type» (Christine Ruggere, in Vision of a Collector: The Lessing J. Rosenwald Collection in the Library of Congress) 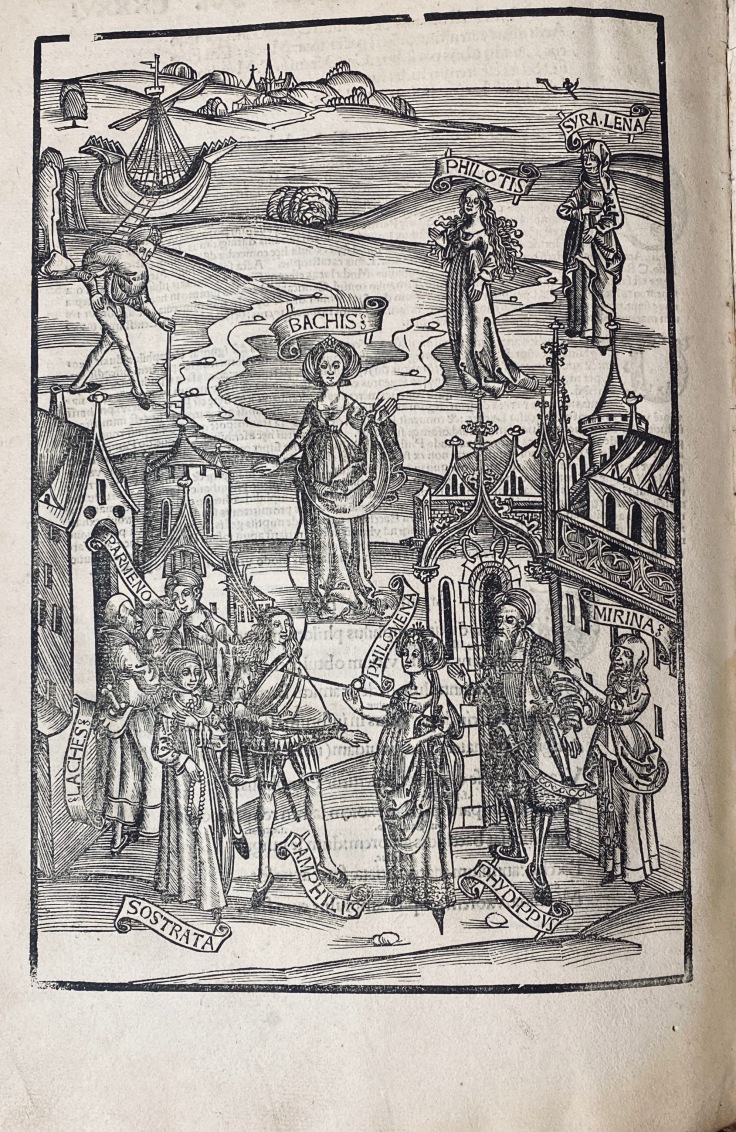 Terence writes in a simple conversational Latin, pleasant and direct.Due to his clear and entertaining language, Terence’s works were heavily used by monasteries and convents during the Middle Ages and The Renaissance. Scribes often learned Latin through the meticulous copying of Terence’s texts. Priests and nuns often learned to speak Latin through reenactment of Terence’s plays, thereby learning both Latin and Gregorian chants. Although Terence’s plays often dealt with pagan material, the quality of his language promoted the copying and preserving of his text by the church. The preservation of Terence through the church enabled his work to influence much of later Western drama. [Holloway, Julia Bolton (1993). Sweet New Style: Brunetto Latino, Dante Alighieri, Geoffrey Chaucer, Essays, 1981-2005.]

This copy has the book plate and a binding typical for Kloss.

NOT Melanchthon’s copy, with marginal notes!

Georg Franz Burkhard Kloss (31 July 1787 Frankfurt am Main – 10 February 1854 Frankfurt).  Kloss was the son of a physician and studied medicine at Heidelberg and Göttingen, where he became one of the cofounders of the Corps Hannovera Göttingen. He practiced medicine in Frankfurt. He became a book collector, and gathered a fine collection of old manuscripts,. On February 21, 1838, New York book auction house Cooley & Bangs began a three day sale during which they offered more than 313 incunabula distributed among 1,302 lots. Many incunables came from the collection of George Kloss and had appeared in the London sale of his books three years before. It is entirely possible that the 1838 sale was the first time in America that so many incunables were offered all at once in a single auction..

The bulk of the Kloss books were sold by Sotheby in 1835. Most of the books containing notes were attributed  as owned and annotated by Melanchthon .

Catalogue of the library of Dr. Kloss of Franckfort a. M.
including many original and unpublished manuscripts, and printed books with ms. annotations, by Philip Melancthon …
Which will be sold by auction, by Mr. Sotheby and son … May 7th, and nineteen following days (Sundays excepted) . 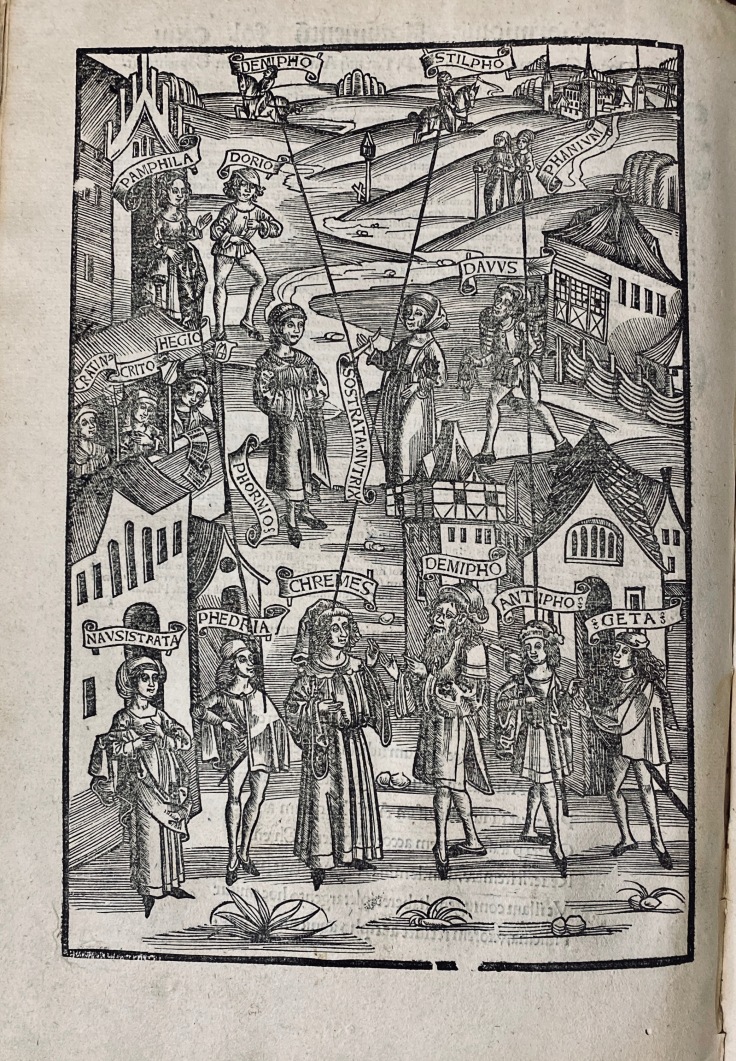 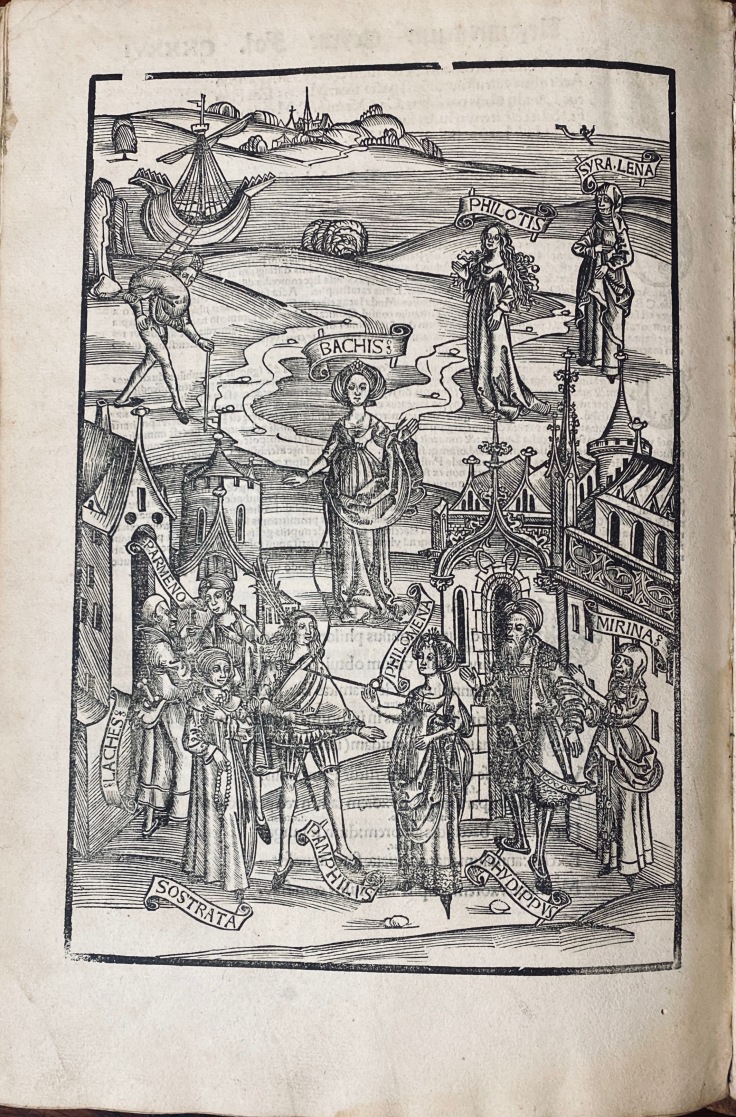