MOLLOY or O’MAOLMHUAIDH, FRANCIS (Jl. 1660), theologian and grammarian, was a native of the county of Meath, Ireland. The family of which he was a member had extensive landed possessions in the district known as O’Molloys’ Country, and some of them engaged actively in the Irish movements from 1641 to 1652.

Francis Molloy entered the order of St. Francis, became a priest, was appointed professor of theology at St. Isidore’s College, Rome, and acted as agent for the Irish catholics at the papal court in the reign of Charles II. His first published work was entitled ‘Tractatus de Incarnatione ad mentern Scoti,’ 1645. This was followed in 1658 by ‘ Jubilatia genethliaca in honorem Prosperi Balthasaris Philippi, Hispani principis, carmine,’ and by a Latin treatise on theology in 1666.

A catechism of the doctrines of the catholic church in the Irish language  was published by Molloy in 1676 with the title: ‘Lucerna tidelium, seu fasciculus decerptus ab authoribus magis versatis qui tractarunt de doctrina Christiana.’ It was printed at Rome at the press of the Congregation ‘de propaganda tide,’ ( This book is the first book they printed in Irish Type) from which, in 1677,  issued another book by Molloy, entitled ‘Grammatica Latino-Hibernica,’ 12mo, the first printed grammar of the Irish language.

Edward Lhuyd [q. v.], in his’ Archaeologia Britannica,’publishedat Oxford in 1707, mentioned that he had seen a manuscript grammar of the Irish language copied at Louvain in 1669 which partially corresponded with  that of Molloy. He added that Molloy’s  grammar, although the most complete exta’nt in his time, was deficient as to syntax and the variation of the nouns and verbs. The date of Molloy’s death has not been ascertained.

In 1626 Propaganda Fide had installed a printing press for the foreign missions and not much later another one was brought to Louvain where books and catechisms were printed for both the local college and the Irish mission.* The problem with the Propaganda printing press was that only books in Latin and Italian were allowed to be printed so it took until 1674 when Francis Molloy asked for permission to print a catechism there in Irish with the explanation “che altra malamente capisce e vacilla assai per mancanza d’intruttore e d’intruttion sana.”**. 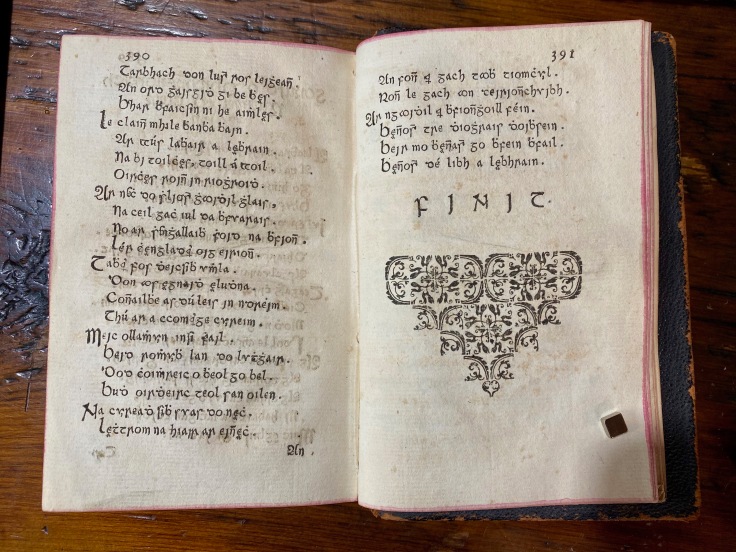