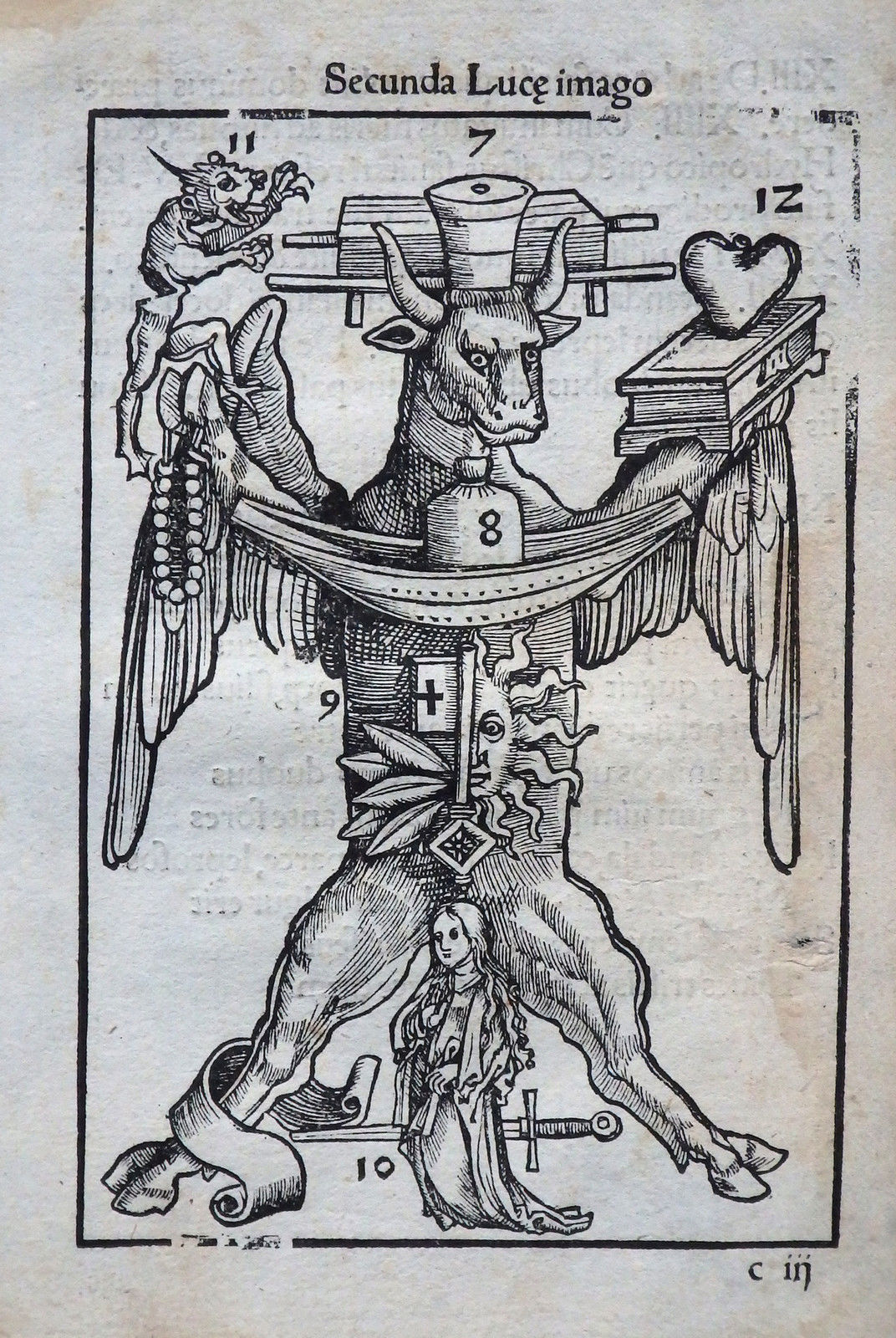 Quarto:  a-c6 with 15 full-page mnemonic woodcuts. Now attributed to thr “”Meister der Pforzheimer Druckerei” The title page is mounted but looks fine and it is bound in modern vellum.

A wonderfully illustrated and curious book, based on the 15th century block-book “Ars Memorandi”, with the 15 woodcuts A series of Latin verses from Petrus von Rosenheim’s (who was, prior of the Benedictine monastery of Melk) “Roseum memoriale” accompanies each of the full-page woodcuts.

The Ars memorandi, which is one of the oldest and most curious mnemonic treatises. It was intended for clerics and was to facilitate their learning of the main Greek biblical passages in its mnemotechnical processes. The iconography offers strange allegorical representations of the Evangelists, each of them constituting innumerable instruments, objects and symbols.Each couplet commences with a different letter in the order of the alphabet (omitting K, X, Y, Z, but including vowel I). These letters correspond to the numbers that appear on the cuts, and together form a method of memorizing the events of the Scripture as told by each of the Evangelists.

“The woodcuts of the Ars Memorandi contain some of the most curious images ever printed. An eagle displays a pair of embracing lovers on its breast; an angel, a sack of grain perched on his head, carries a blazing sun in one hand and a figure of the Christ Child in the other. The oddity of these pictures, however, had its purpose. The eagle and 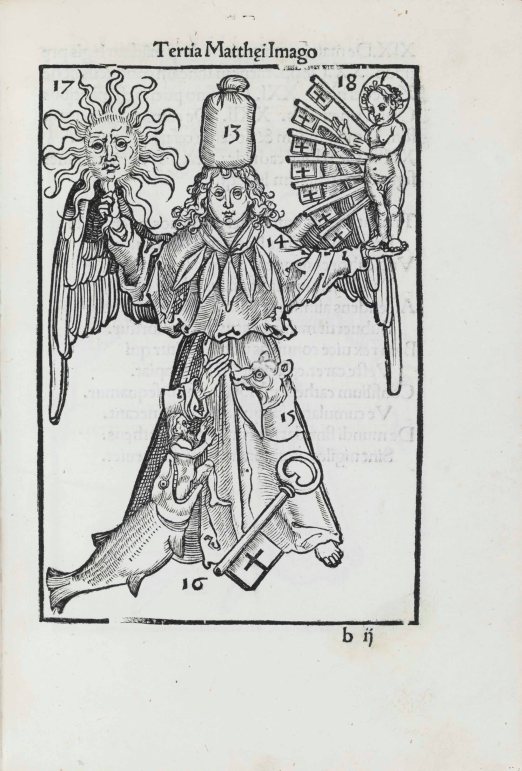 the angel, as well as the lion and the ox, are symbols of the four Evangelists, and the additional objects or figures refer to specific events in the Gospels. These woodcuts, together with the accompanying text, were an aid for the reader in memorizing the events of the life of Christ…. Our edition has no title page (not until the fifth edition did one appear); instead, the first leaf bears Latin verse by Sebastian Brant, Jodocus Gallus and Georgius Relmisius (i.e. Georg Simler), the editor. Simler’s preface appears on the next leaf. There are fifteen full-paged woodcuts. Each is dominated by one of the Evangelists’ symbols with details that allude to events in Christ’s life. Each facing page contains the explanatory prose with numbers corresponding to the details on the cuts.  Below the prose are the Latin distichs by Peter von Rosenheim. ….The Ars Memorandi, one of the most remarkable early mnemonic works,and  is extremely rare.” (This quote is from the introduction of the first complete reproduction of the Ars Memorandi (1981) by Roger S. Wieck, Assistant Curator of Printing and Graphic Arts of the Houghton Library at Harvard University) 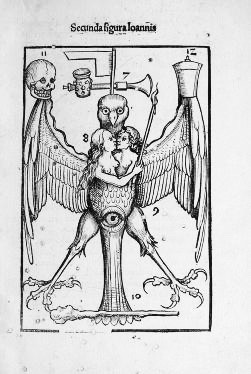 The purpose was twofold: first, a method of memorizing the contents of each Gospel by means of woodcut figures worked into compact symbolical form; second, a method by which the priest might instruct those who could not read, using the accompanying key in explainingthe pictures to the illiterate. Of the cuts, 3 are for St. John’s Gospel, 5 for St. Matthew’s, 3 for St. Mark’s, and 4for St. Luke’s. Each is constructed with one great figure in the back-ground, on whose arms, legs, head, body, etc. are crowded the other symbols. Thus the background for the St. John is a Phoenix. Such curious objects appear as a leper’s clappers. money changers’ dishes, and early musical instruments. 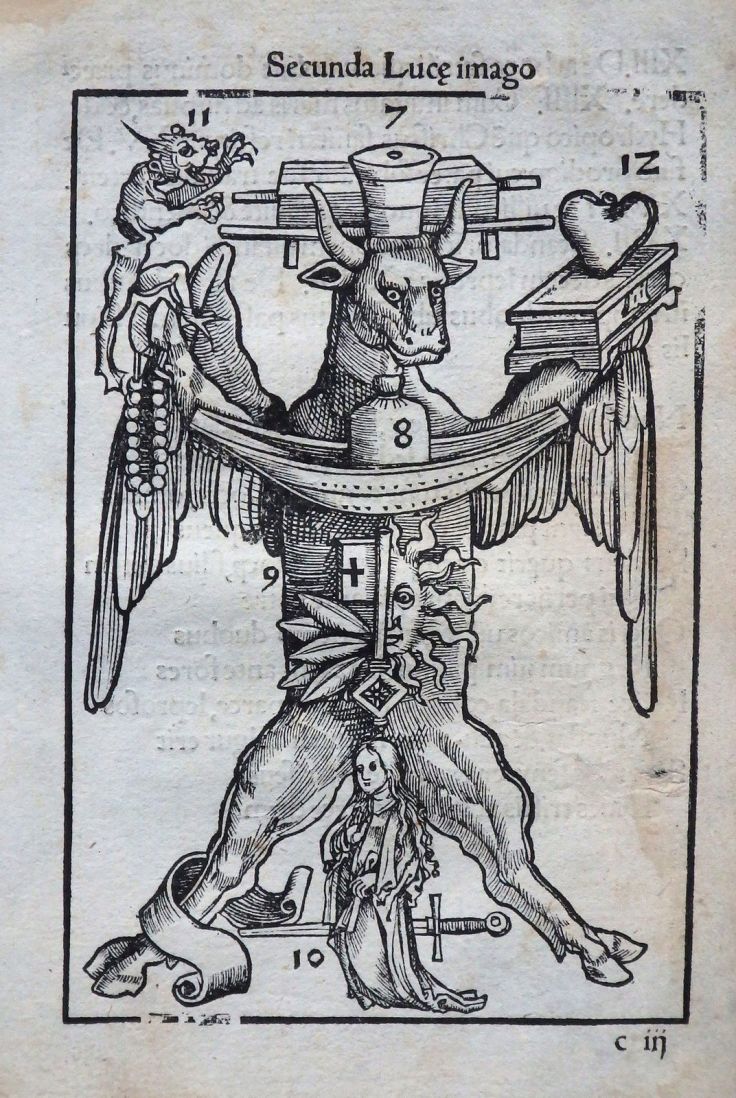