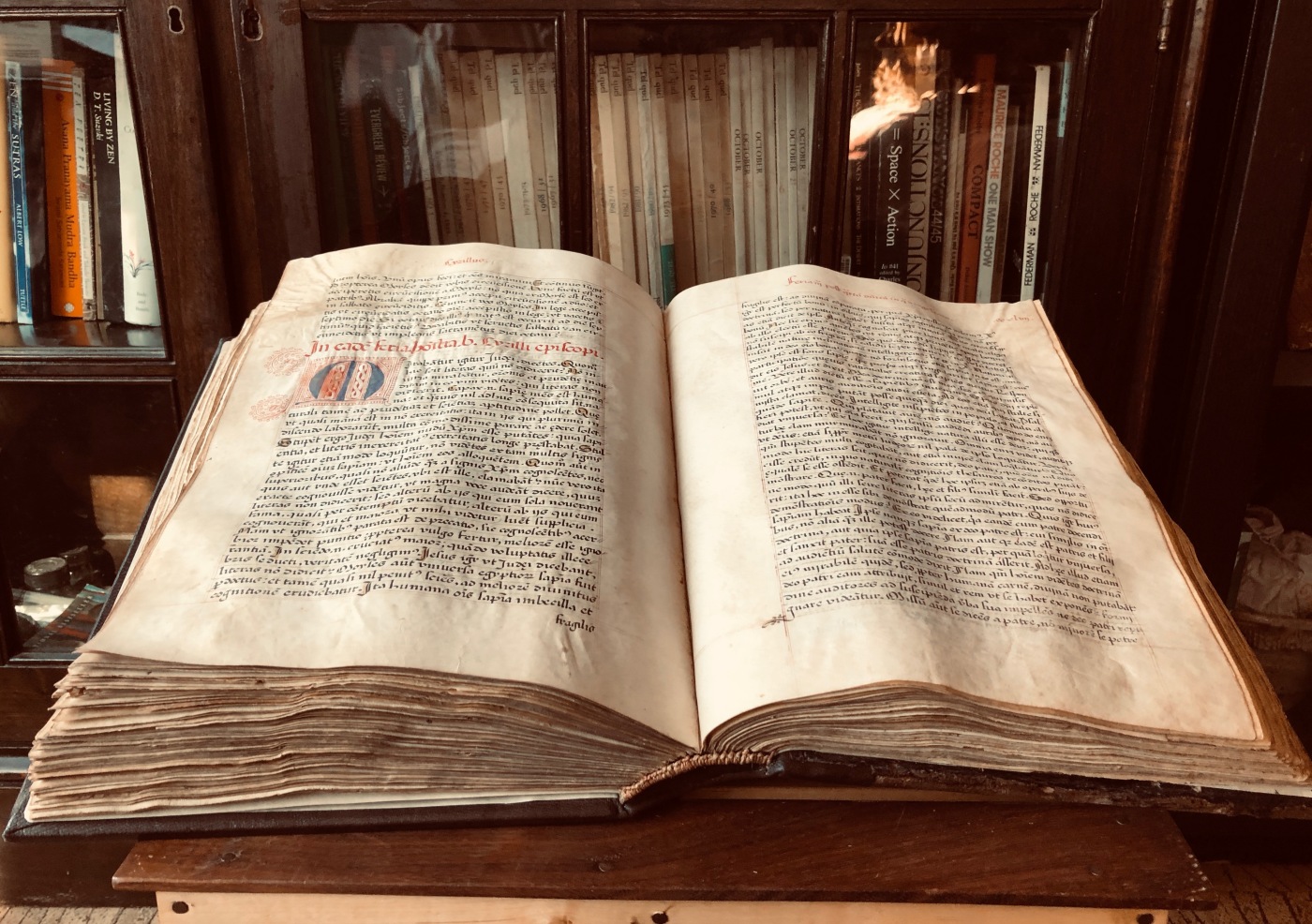 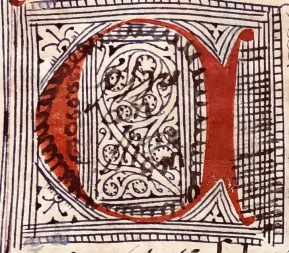 196 Leaves This manuscript begins at Leaf 141 and continues to CCCXXVIII, (141- 337 leaves). For a total of 196 manuscript leaves on vellum. There are catch words and original it had signatures in the beginning of each quire, but they are now unintelligible. There are thirty five  large decorated initials with nice neat pen work. This book has seen a lot of use. Some pages have been trimmed, sections have been scratched out and others corrected. many leaves have cuts and cracks some repaired earlier than later, by stitching .

The rear board with bosses is intact but the spine and front board are long gone, It his been restored with calf over a quarter sawn oak board, decorated to match the original board. 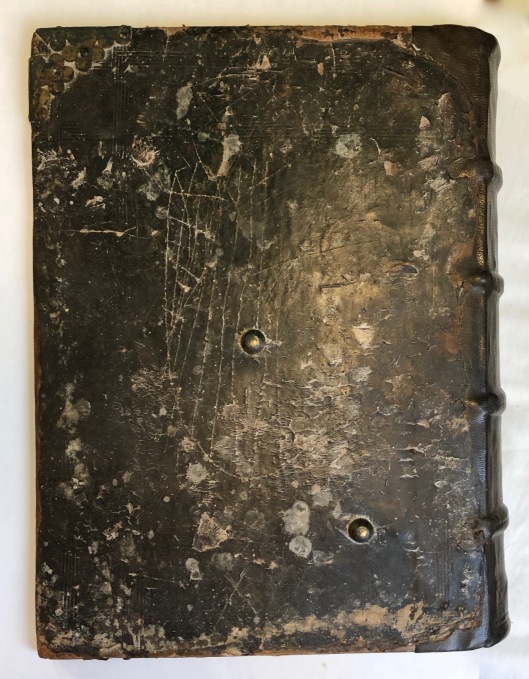 For this  collection of Homilies, who was the editor is  not certain, and while traditionally it is attributed to Paul  the Deacon  approximately 720-799  There is also supposition that it was collected by Alcuin or even Bede.

What we do know is that the production of
Homiliary began in the 780s when Charlemagne (742/743–814) appointed  Paul the Deacon to compose a Homiliary. Charlemagne,” has been represented as the sponsor or even creator of medieval education, and the Carolingian renaissance has been represented as the renewal of Western culture. This renaissance, however, built on earlier episcopal and monastic developments, and, although Charlemagne did help to ensure the survival of scholarly traditions in a relatively bleak and rude age, there was nothing like the general advance in education that occurred 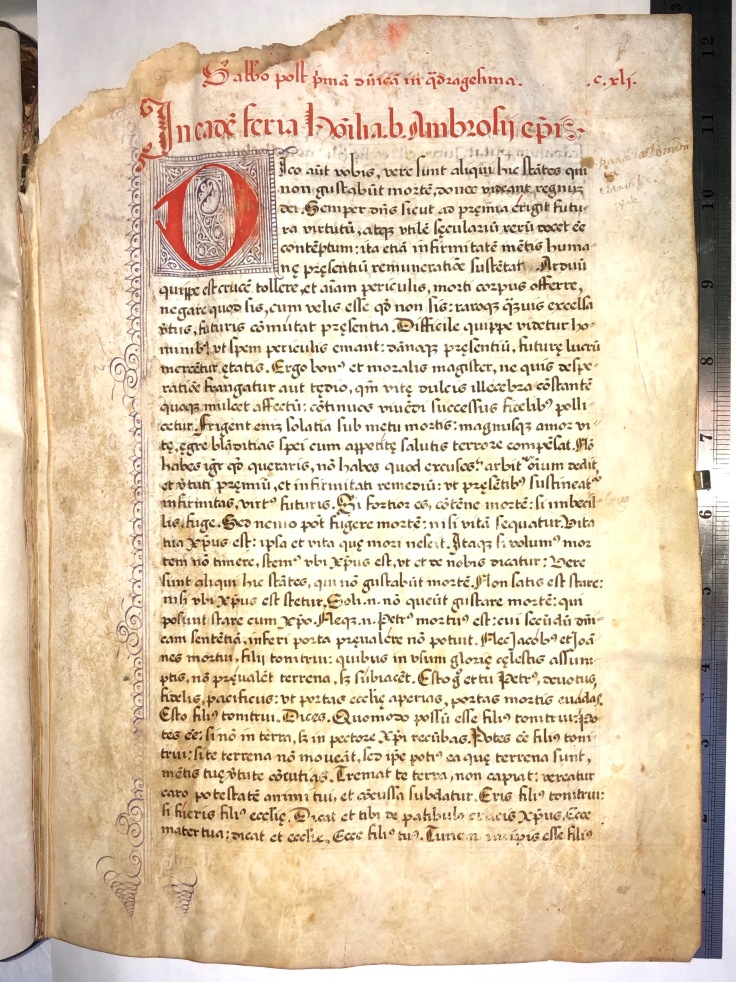 with the cultural awakening of the 11th and 12th centuries. Learning, 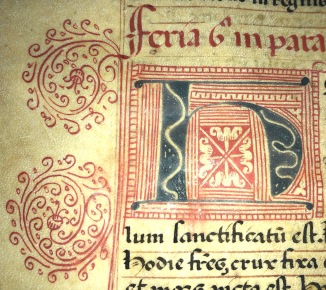 nonetheless, had no more ardent friend than Charlemagne, who came to the Frankish throne in 768 distressed to find extremely poor education systems” [EB] “Charlemagne stands out as the personification of everything that is unselfish and noble, a conqueror who visualized himself as the champion of European unity with the purpose of saving Europe through imperial conquest—an evangelist with a sword. As it turns out, Charlemagne did see himself as the Conqueror of everything pagan and heterodox and the divinely destined builder of Augustine’s City of God—of “one God, one emperor, one pope, one city of God.”[2]  It was as if Charlemagne consciously sought to fulfill Plato’s vision of the ideal philosopher king. After all, Europe badly needed a conquering strong man like David of old, who could exercise wisdom and discernment in the sustainment of God’s new Jerusalem on earth.” [Gregory W. Hamilton ;http://nrla.com/charlemagne-and-the-vision-of-a-christian-empire/%5D 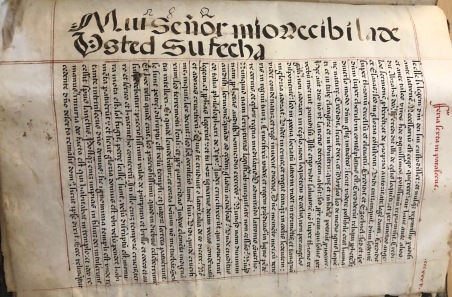 So, We do know that ” From a very early time the Homilies of the Fathers were in high esteem, and were read in connection with the recitation of the Divine Office. That the custom was as old as the sixth century we know since St. Gregory the Great refers to it, and St. Benedict mentions it in his rule (Pierre Batiffol, History of the Roman Breviary, 107). This was particularly true of the homilies of Pope St. Leo I, very terse and peculiarly suited to liturgical purposes 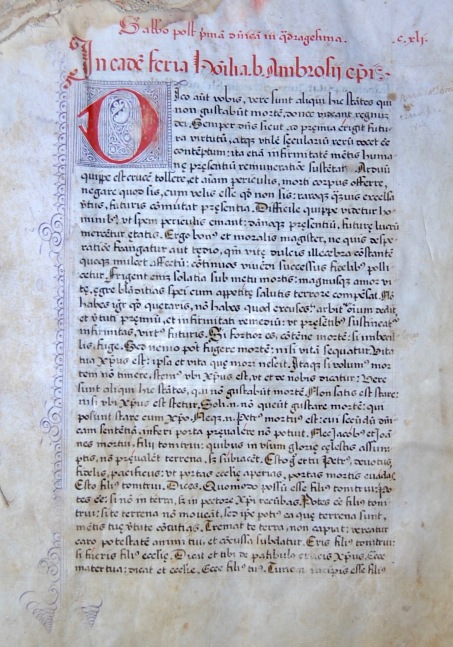 This particular Homilarium Begins [folio cxli] with Ambrose (340-397) Homilies for the  Quadragesima  (forty days of Lent -Yes lent is longer than 40 days even though there are more 40 days from Ash Wednesday to Easter. ( counting the days of Lent excluding its Sundays and the Sacred Triduum, which technically is a separate sacred time.) This takes up to folio 224 (cclxxiiii). Following St Ambrose who has iv sermons in this section  are sermons by Origen, Bede , John Chrystosom  Cyrill , Augustine , Peter Chrysologus  Archbishop of Ravenna , Alcuin of York .

After the Quadragesima series begins the Homilies for The Passion of Christ (Holy Week) On Palm Sunday, Jesus and his disciples spent the night in Bethany, a town about two miles east of Jerusalem. This is where Lazarus, whom Jesus had raised from the dead, and his two sisters, Mary and Martha lived. They were close friends of Jesus, and probably hosted Him and His disciples during their final days in Jerusalem. 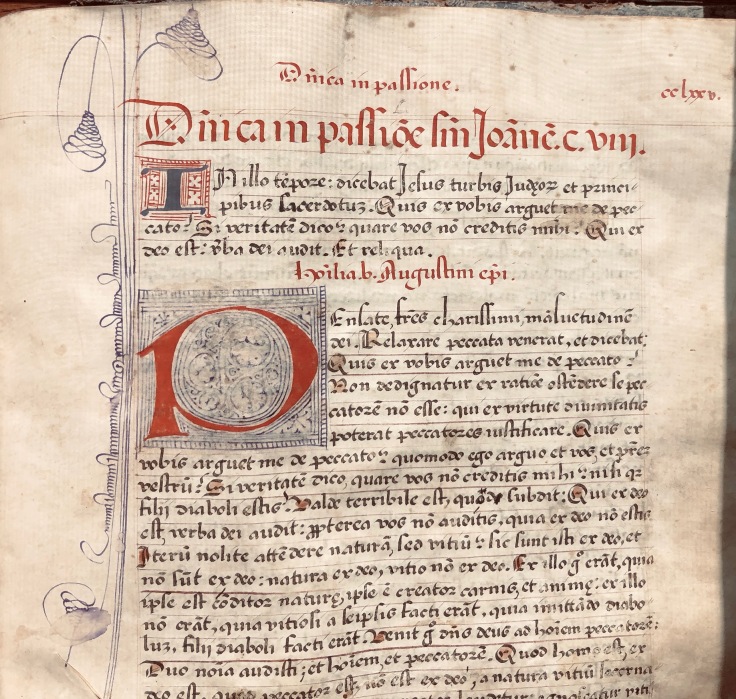 This section (folios 141-245 )of Homilies begins at Quadragesima  see above. 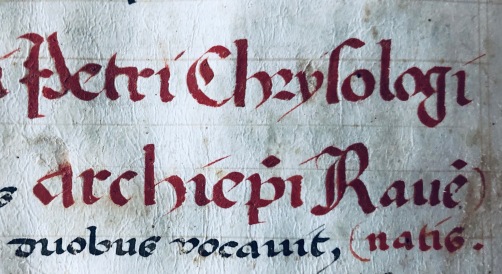 (c. 380 – c. 450) Archbishop of Ravenna, approximately 400-450 , The earliest printed work by Chrysologus is 1575 Insigne et pervetvstvm opvs homiliarum.He is known as the “Doctor of Homilies” for the concise but theologically rich reflections he delivered during his time as the Bishop of Ravenna. His surviving works offer eloquent testimony to the Church’s traditional beliefs about Mary’s perpetual virginity, the penitential value of Lent, Christ’s Eucharistic presence, and the primacy of St. Peter and his successors in the Church. Few details of St. Peter Chrysologus’ biography are known. He was born in the Italian town of Imola in either the late fourth or early fifth century, but sources differ as to whether this occurred around 380 or as late as 406.

Beyond Chrstostoms preaching, the other lasting legacy of John is his influence on Christian liturgy. Two of his writings are particularly notable. He harmonized the liturgical life of the Church by revising the prayers and rubrics of the Divine Liturgy, or celebration of the Holy Eucharist. To this day, Eastern Orthodox and Eastern Catholic Churches of the Byzantine Rite typically celebrate the Divine Liturgy of Saint John Chrysostom as the normal Eucharistic liturgy, although his exact connection with it remains a matter of debate among experts.

Cyril’s jurisdiction over Jerusalem was expressly confirmed by the First Council of Constantinople (381), at which he was present. At that council he voted for acceptance of the term homoousios,(“consubstantial” this term was later also applied to the Holy Spirit 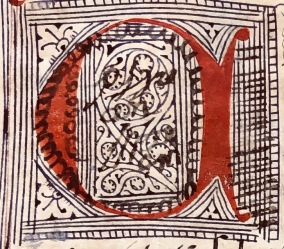 in order to designate it as being “same in essence” with the Father and the Son. Those notions became cornerstones of theology in Nicene Christianity, and also represent one of the most important theological concepts within the Trinitarian doctrinal understanding of God) having been finally convinced that there was no better alternative. Cyril’s writings are filled with the loving and forgiving nature of God which was somewhat uncommon during his time period. Cyril fills his writings with great lines of the healing power of forgiveness and the Holy Spirit, like “The Spirit comes gently and makes himself known by his fragrance. He is not felt as a burden for God is light, very light. Rays of light and knowledge stream before him as the Spirit approaches. The Spirit comes with the tenderness of a true friend to save, to heal, to teach, to counsel, to 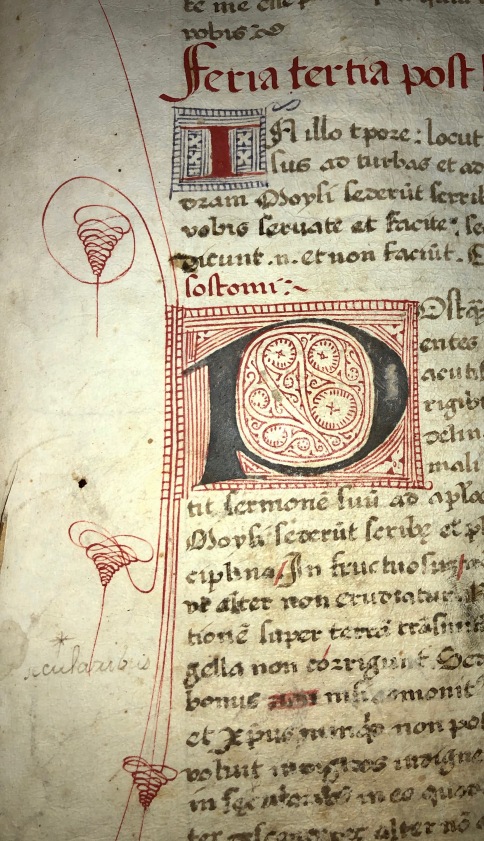 strengthen and to console”. Cyril himself followed God’s message of forgiveness many times throughout his life. This is most clearly seen in his two major exiles where Cyril was disgraced and forced to leave his position and his people behind. He never wrote or showed any ill will towards those who wronged him. Cyril stressed the themes of healing and regeneration in his catechesis. the well-known Catechetical Lectures of St. Cyril of Jerusalem, to explain them to the catechumens during the latter part of Lent

Holy God, you gather the whole universe
into your radiant presence and continually reveal your Son as our Savior.
Bring healing to all wounds,
make whole all that is broken,
speak truth to all illusion,
and shed light in every darkness,
that all creation will see your glory and know your Christ. Amen. 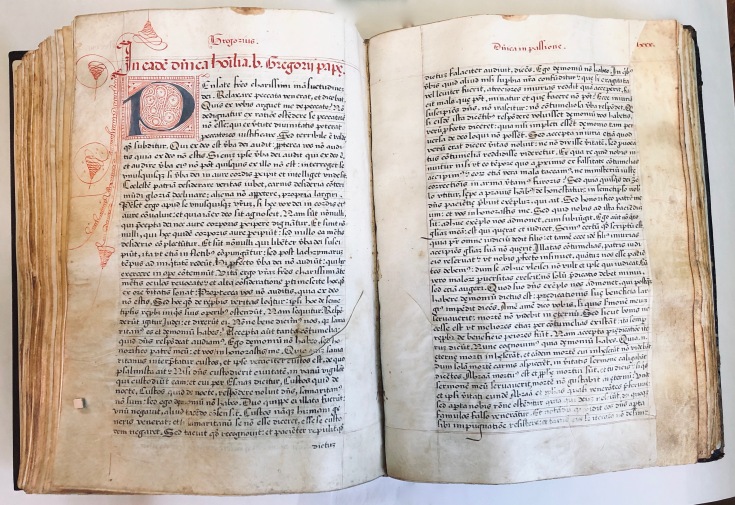 Alcuin of York : Flaccus Albinus Alcuinus; c. 735 – 19 May 804 AD)—also called Ealhwine, Alhwin or Alchoin—was an English scholar, clergyman, poet and teacher from York, Northumbria. He was born around 735 and became the student of Archbishop Ecgbert at York. At the invitation of Charlemagne, he was a leading scholar and teacher at the Carolingian court, where he remained a figure in the 780s and ’90s.

Alcuin wrote many theological and dogmatic treatises, as well as a few grammatical works and a number of poems. He was made Abbot of Tours in 796, where he remained until his death. “The most learned man anywhere to be found”, according to Einhard‘s Life of Charlemagne (ca. 817-833), he is considered among the most important architects of the Carolingian Renaissance. Among his pupils were many of the dominant intellectuals of the Carolingian era 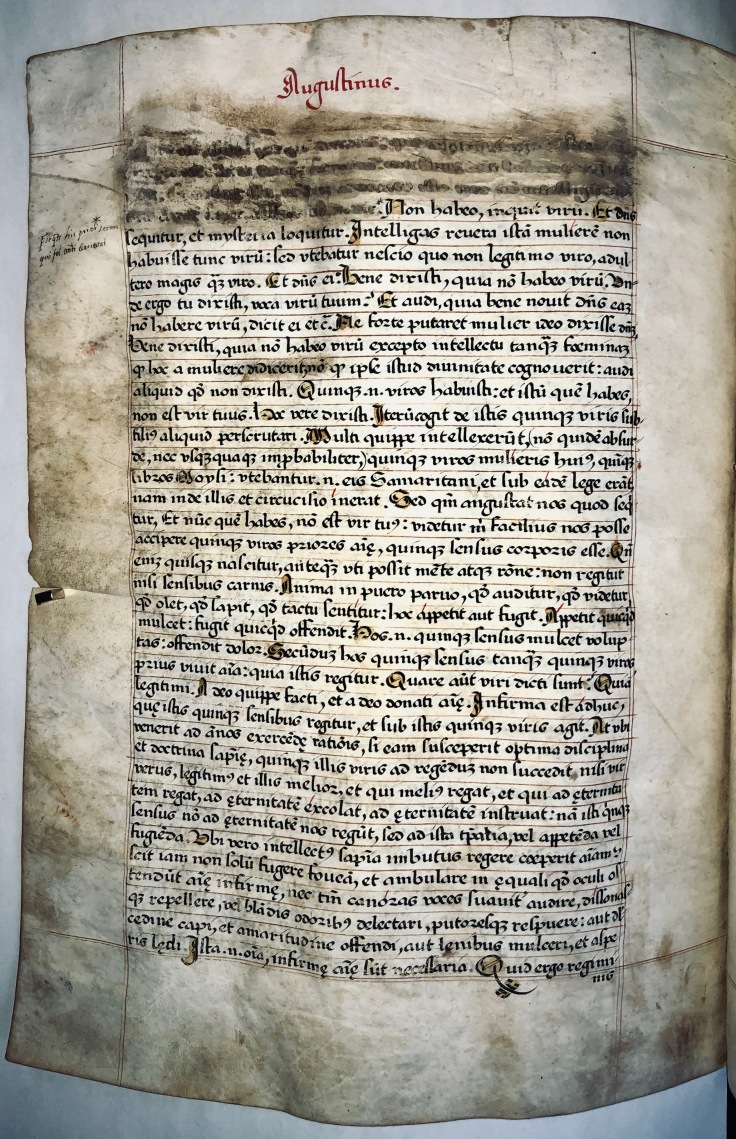 Origen, most modest of writers, hardly ever alludes to himself in his own works; but Eusebius has devoted to him almost the entire sixth book of “Ecclesiastical History”. Eusebius was thoroughly acquainted with the life of his hero; he had collected a hundred of his letters; in collaboration with the martyr Pamphilus he had composed the “Apology for Origen”; he dwelt at Caesarea where Origen’s library was preserved, and where his memory still lingered; if at times he may be thought somewhat partial, he is undoubtedly well informed. We find some details also in the “Farewell Address” of St. Gregory Thaumaturgus to his master, in the controversies of St. Jerome and Rufinus, in St. Epiphanius (Haeres., LXIV), and in Photius (Biblioth. Cod. 118). 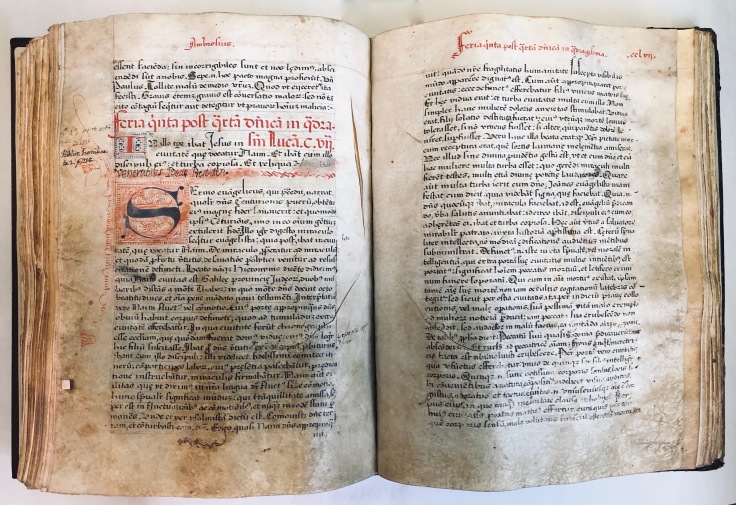 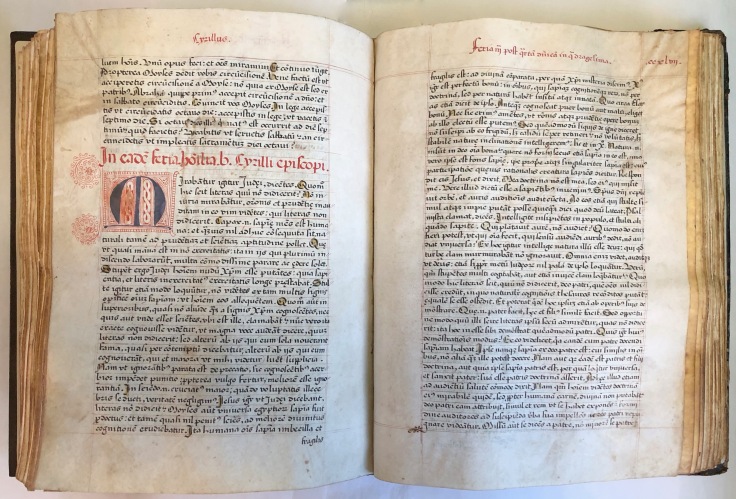 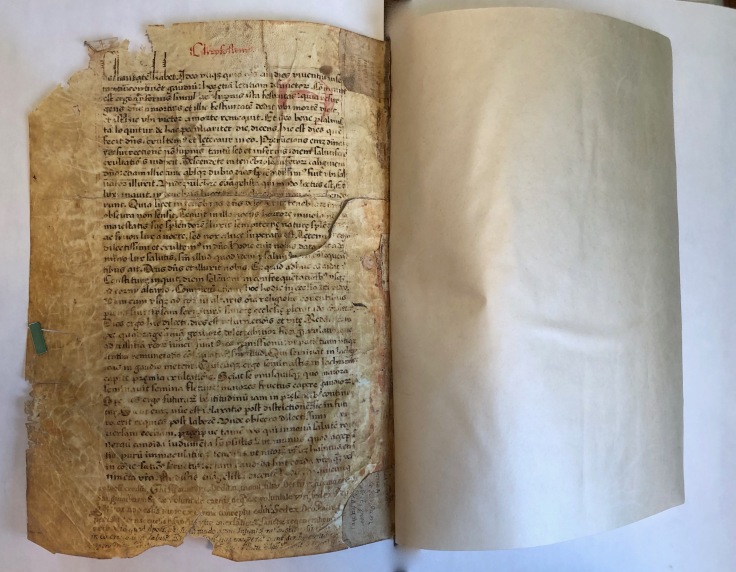 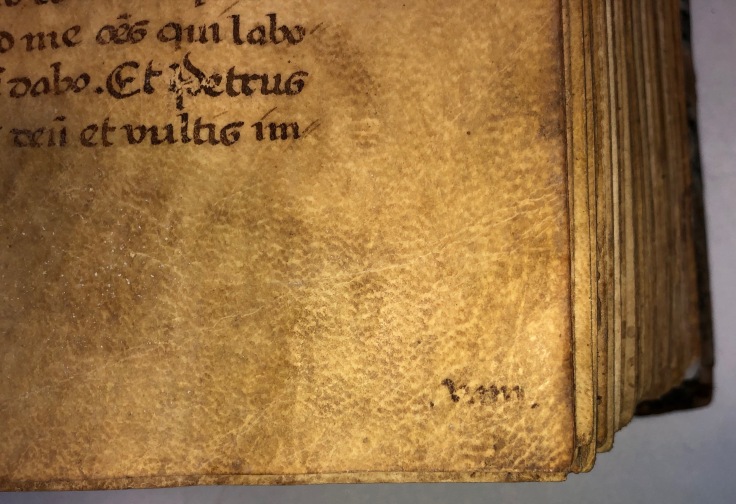