Second Edition (Third edition of Nuncius Sidereus). Bound in full contemporary blind tooled sheep recently rebacked with spine lable. The internal text is generally clean and crisp with only slight aging, it is quite an nice copy.

This book contains four full page plates of constellations.The text is illustrated with astronomical woodcuts including images of the moon, showing its uneven, mountainous surface as discerned by Galileo through the telescope and four full-paged woodcut illustrations of stars (the Pleiades, Orion’s belt, the Praesepe and Orion Nebulas.( see Images below)

Gassendi’s “Institutio Astronomica,” has been called the first modern astronomy textbook. It is divided into three sections: the first details the so-called theory of the spheres, the second describes astronomical theory, and the third discusses the conflicting ideas of Brahe and Copernicus. The present edition is important for the inclusion of two seminal works of telescopic astronomy: Galileo’s “Sidereus Nuncius” (first ed. Venice, 1610), in which announces his discovery of Jupiter’s moons, and Kepler’s “Dioptrice” (first ed. Augsburg, 1611), Kepler’s brilliant explanation of how the telescope works.Galileo’s Discoveries with the Telescope:”Galileo’s ‘Starry Messenger’ contains some of the most important discoveries in scientific literature. Learning in the summer of 1609 that a device for making distant objects seem close and magnified had been brought to Venice from Holland, Galileo soon constructed a spy-glass of his own which he demonstrated to the notables of the Venetian Republic, thus earning a large increase in his salary as professor of mathematics at Padua. Within a few months he had a good telescope, magnifying to 30 diameters, and was in full flood of astronomical observation.”

Through his telescope Galileo saw the moon as a spherical, solid, mountainous body very like the earth-quite different from the crystalline sphere of conventional philosophy. He saw numberless stars hidden from the naked eye in the constellations and the Milky Way.
The “Institutio Astronomica” is divided into three sections: the first details the so-called theory of the spheres, the second describes astronomical theory and the third discusses the conflicting ideas of Brahe and Copernicus, “quorum utrum nobileis auctores adipiscitur”(each of which is unfolded by noble authors) as Gassendi says.“His [Gassendi’s] true intellectual master was Galileo. In the ’Exercitationes’ of 1624 Gassendi had demonstrated his philosophic independence, and as early as 12 July 1625 he wrote to

Galileo that he shared his Copernican ideas. But he never had to suffer the anxieties of the great Florentine. His choice of Epicurean atomism as a framework for the exposition of his ideas appears to have been more a revolt against Scholasticism than the expression of any profound conviction. Moreover, his erudition embraced all doctrines, including those of the church fathers, whereas he rejected such important elements of Epicureanism as the vertical fall and swerving of atoms.“Gassendi’s eclecticism was that of a skeptic assured that no one doctrine penetrates to the essence of things–indeed, this is a constant aspect of his thought. Yet he proceeded as would a historian for whom the human mind had exhausted all possibilities, in contrast to Descartes, who wrote as if unaware that anyone had ever done philosophy before him. Gassendi’s first published letter reveals an extreme diversity in what he chose to adopt and a great deal of personal assurance; he rejected only dogmatism, even when Epicurean. Bound by no fixed viewpoint, he could more easily go along with the traditions of his peasant milieu. If his morality preached happiness, his method for attaining it was conformist.  A worldly type like Saint-Evermond thought him timid. A fanatic like J.-B. Morin consigned him to the flames. Descartes accused him of nothing less that materialism–thereby contributing more than slightly to the suspicion in which he was held. Gassendi, in turn, treated Descartes as a dogmatist.” (DSB)

“But wherever the power of the Roman Curia could reach, philosophers had to submit,

though some of them did it very unwillingly. Among these was Pierre Gassendi (1592-1655) who in his numerous writings often praises the Copernican system, and says that he would have preferred it if it had not been pronounced contrary to Scripture, for which reason he was obliged to adopt the Tychonic system.” (Dreyer)“[Gassendi] was one of the most eminent philosophers and savants of France, and one who added lustre to almost every branch of learning, being at the same time historian, naturalist, mathematician, astronomer, logician, Hellenist, metaphysician, and critic; and all this at a period when the sciences had scarcely emerged from their infancy. He is regarded as the most universal genius of that age. The first disciple of Bacon in France, he was also the correspondent and friend of Galileo and Kepler.“The mind of Gassendi was penetrating and refined, his style elegant and clear, his manners simple and full of amenity. In his efforts to subvert the inveterate prejudices of the Schoolmen with respect to Aristotle and Epicurus, he has displayed a union of vast erudition, sound criticism, and mental independence.” (Thomas) 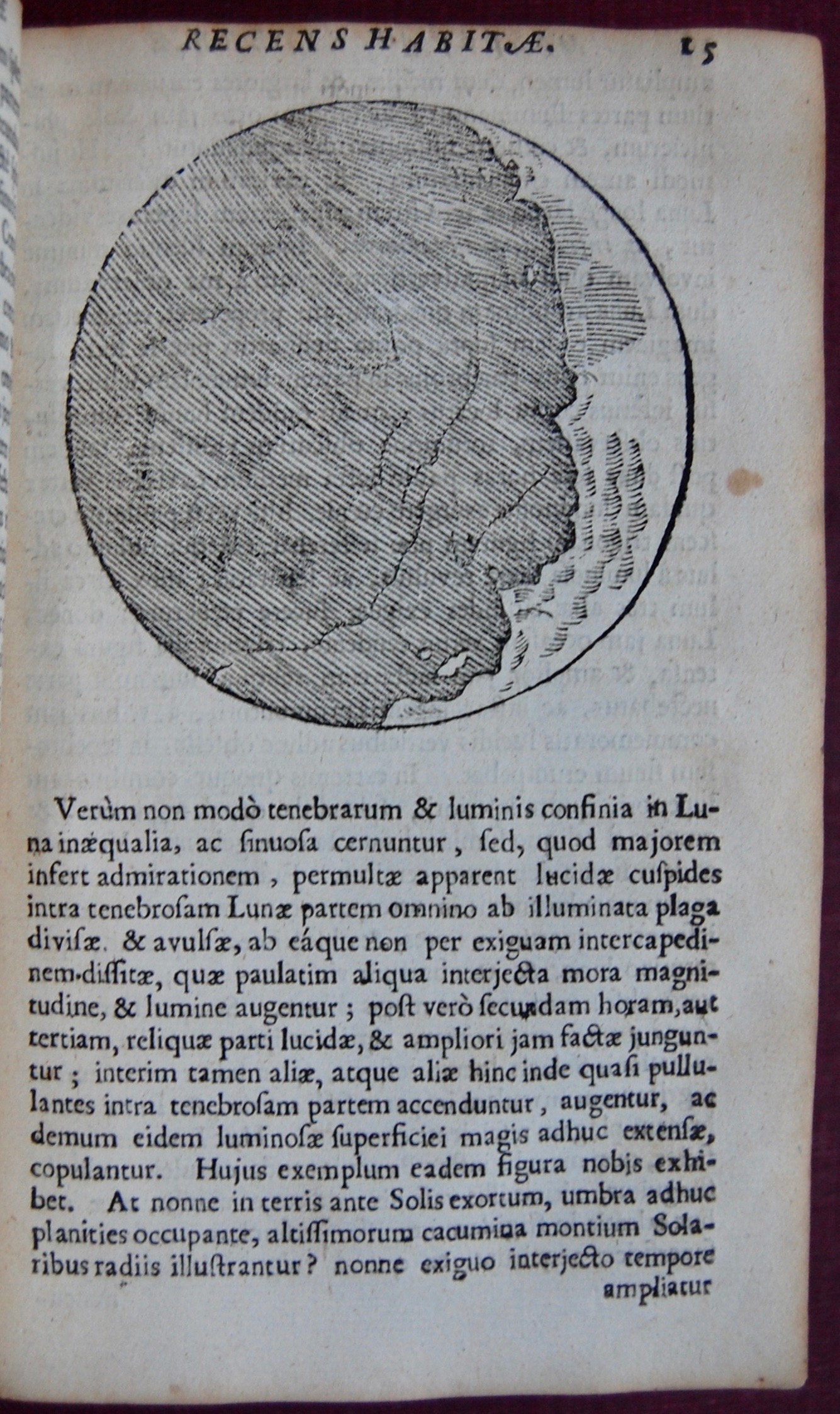 “In this work( Sidereus Nuncius) the use of the newly invented telescope by Galileo with the improvements he had made to it led to revolutionary discoveries.

The most important was the existence of the satellites of Jupiter. The observation of this system convinced Galileo finally of the truth of the Copernican system and has remained ever since one of its powerful demonstrations. Galileo further observed that the Milky Way and the great nebulae were composed of countless stars.” (Quoted from the Printing & the Mind of Man exhibition catalogue, number 245.)

“In this work( Sidereus Nuncius) the use of the newly invented telescope by Galileo with the improvements he had made to it led to revolutionary discoveries.

The most important was the existence of the satellites of Jupiter. The observation of this system convinced Galileo finally of the truth of the Copernican system and has remained ever since one of its powerful demonstrations. Galileo further observed that the Milky Way and the great nebulae were composed of countless stars.” (Quoted from the Printing & the Mind of Man exhibition catalogue, number 245.) 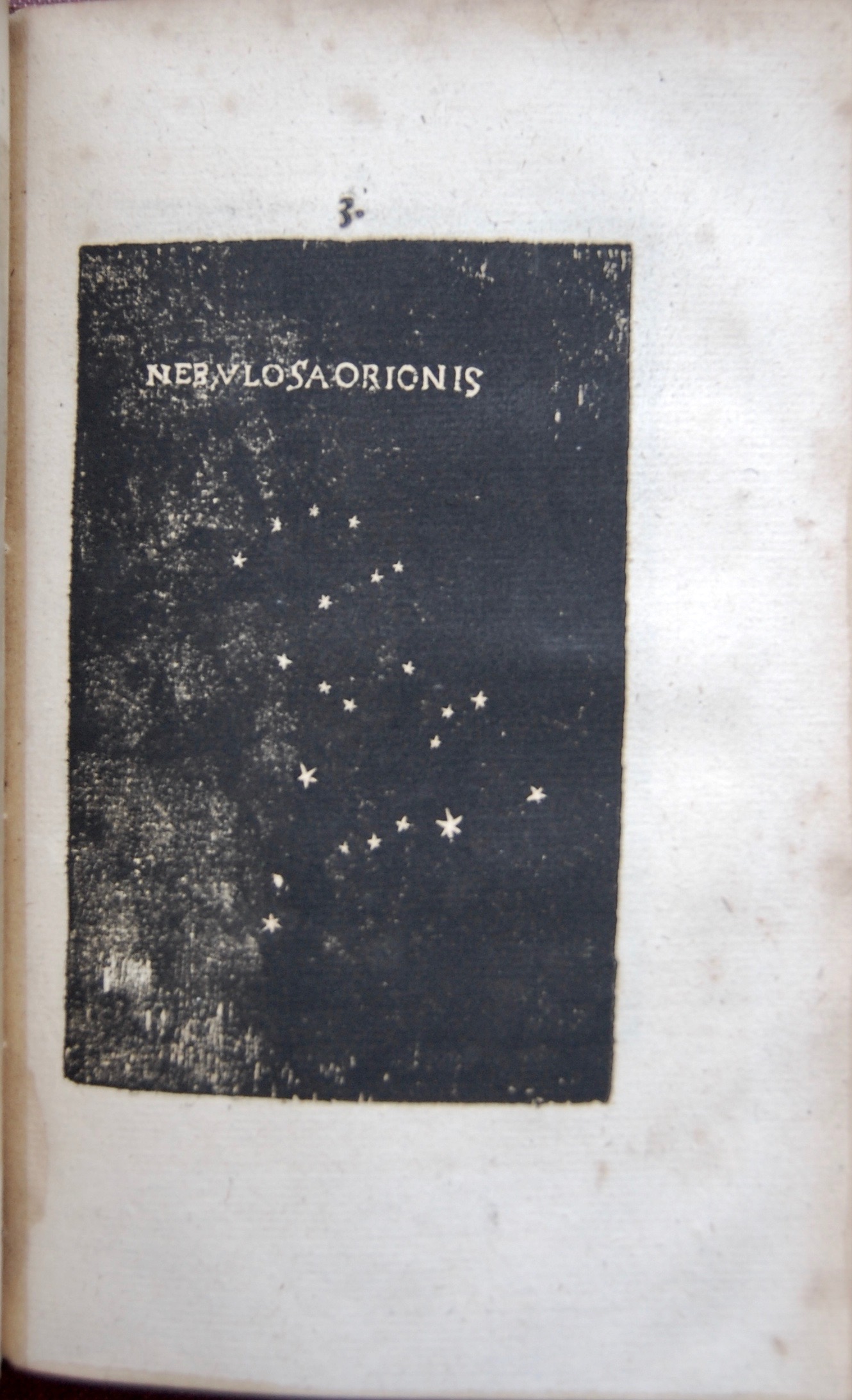 After hearing of Galileo’s telescopic discoveries, Kepler also started a theoretical and experimental investigation of 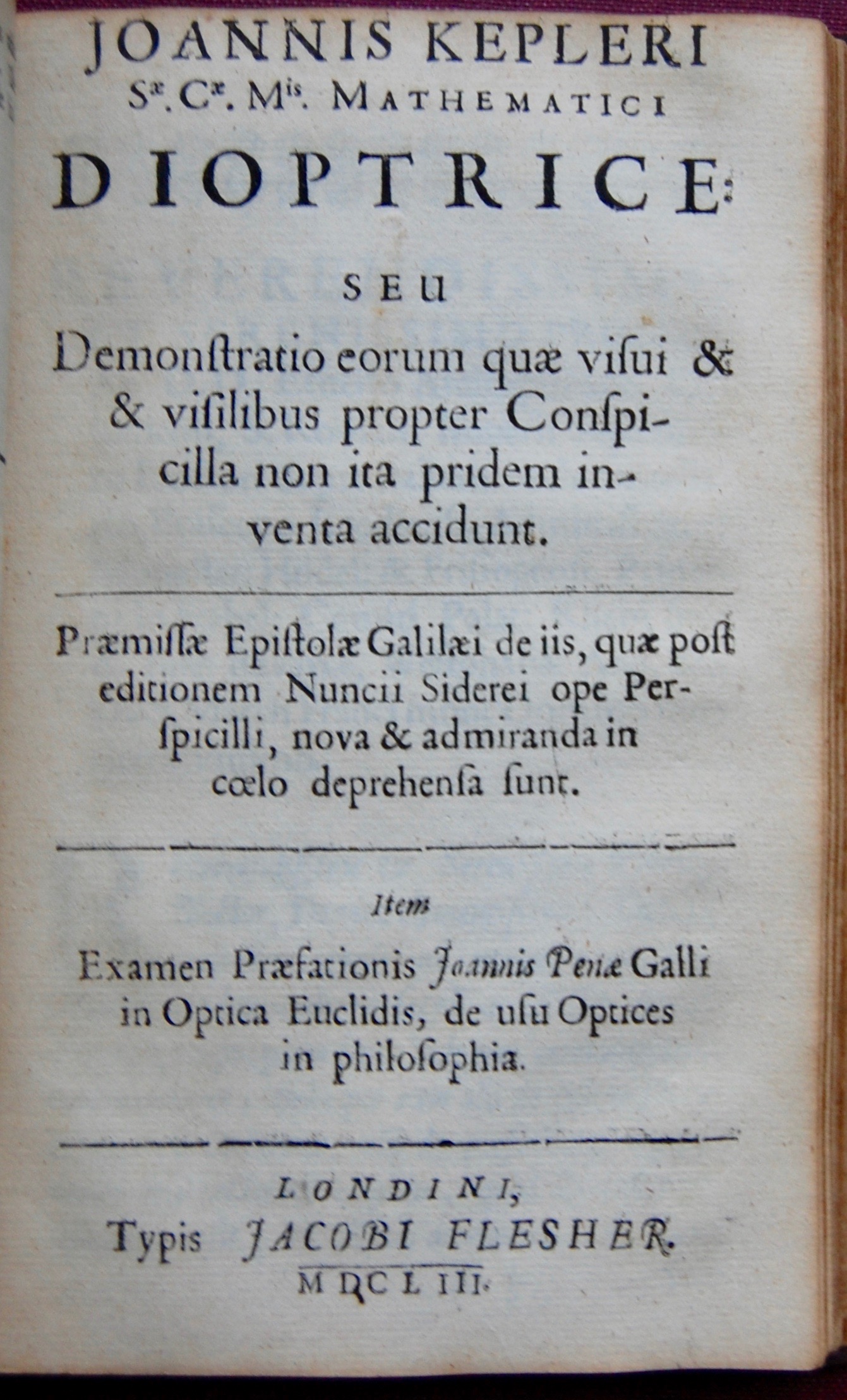 telescopic optics using a telescope borrowed from Duke Ernest of Cologne. The resulting manuscript was completed in September 1610 and published as Dioptrice in 1611. In it, Kepler set out the theoretical basis of double-convex converging lenses and double-concave diverging lenses—and how they are combined to produce a Galilean telescope—as well as the concepts of real vs. virtual images, upright vs. inverted images, and the effects of focal length on magnification and reduction. He also described an improved telescope—now known as the astronomical or Keplerian telescope—in which two convex lenses can produce higher magnification than Galileo’s combination of convex and concave lenses.