“The devil sees the sign and hears the word, he knows what they indicate; then he performs the act, and it is the devil who does this and not [the witches].” 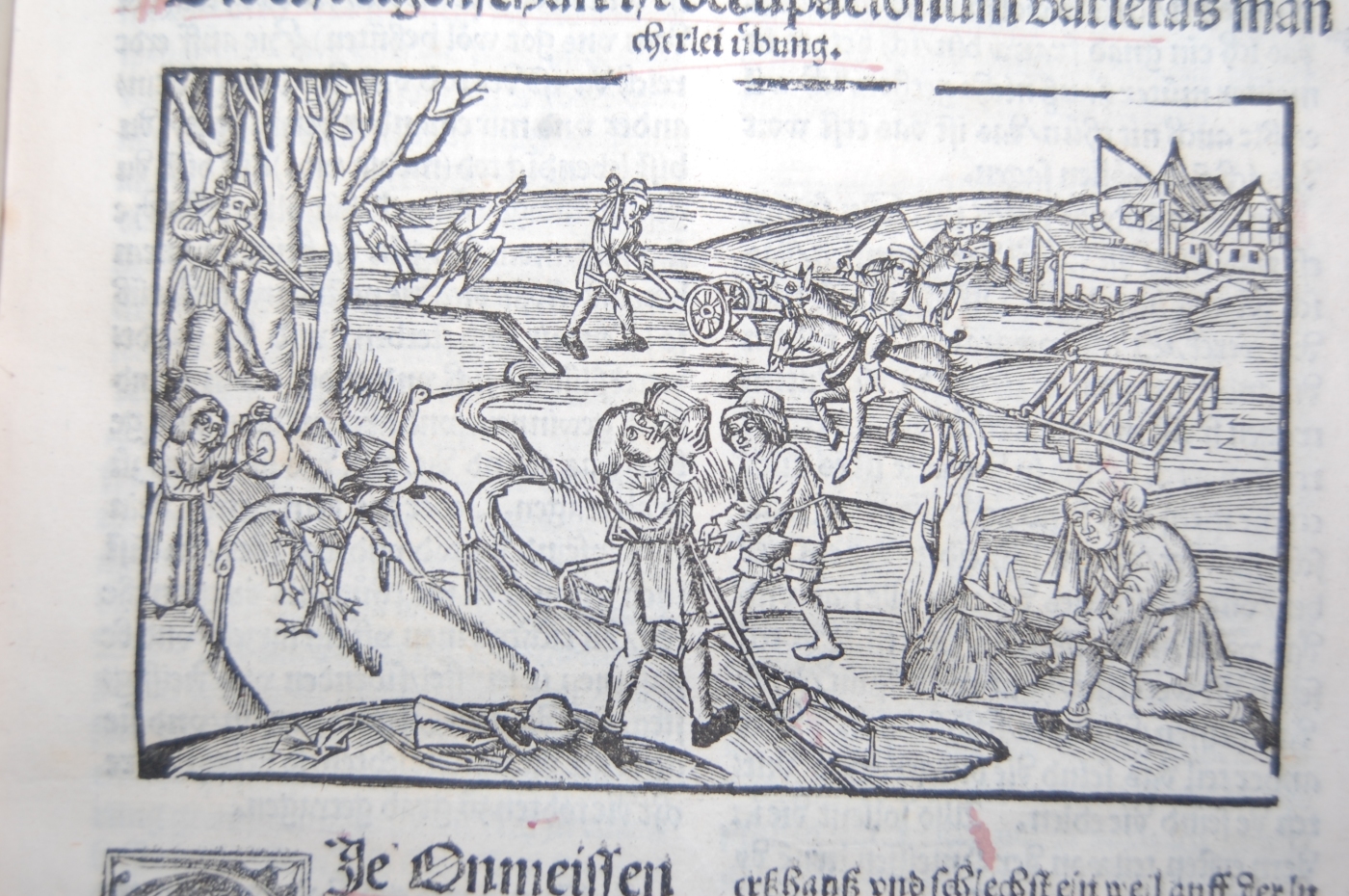 “the devil sees the sign and hears the word, he knows what they indicate; then he performs the act, and it is the devil who does this and not [the witches].” 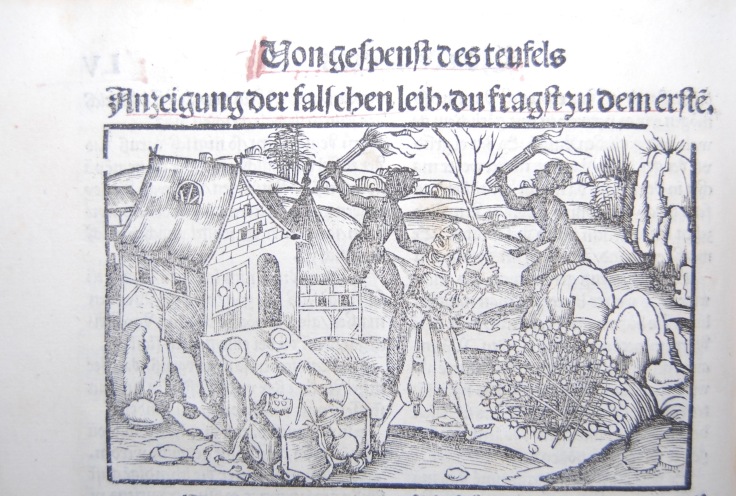 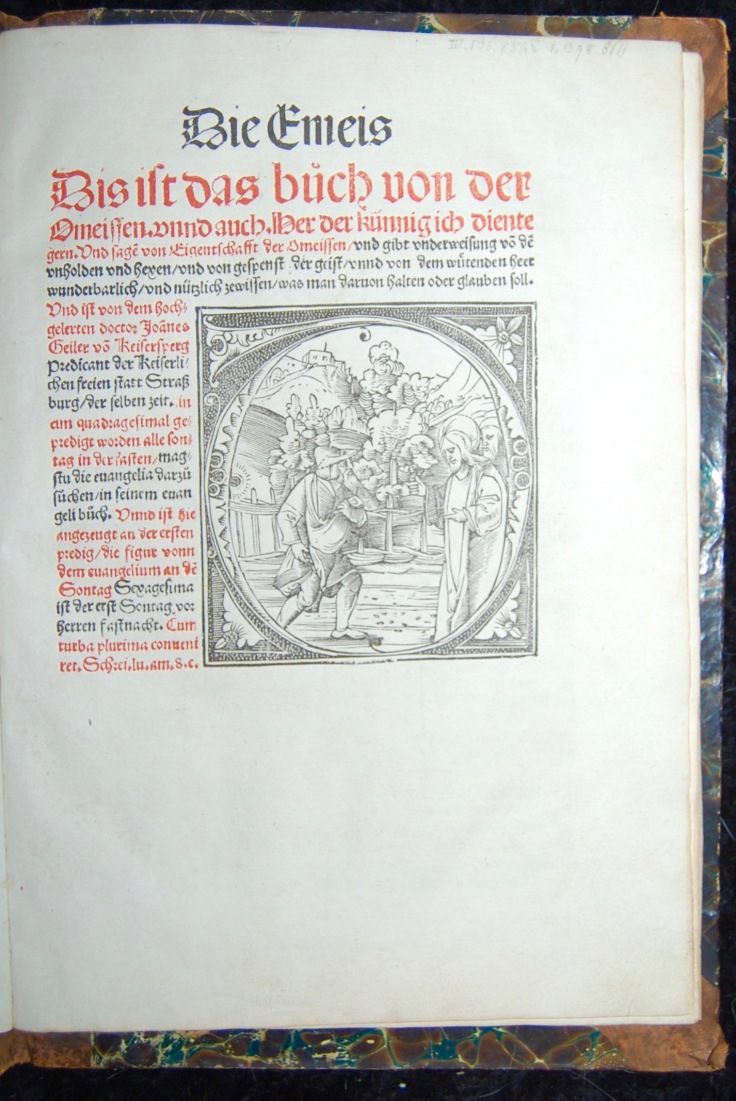 FIRST EDITION, and probably the 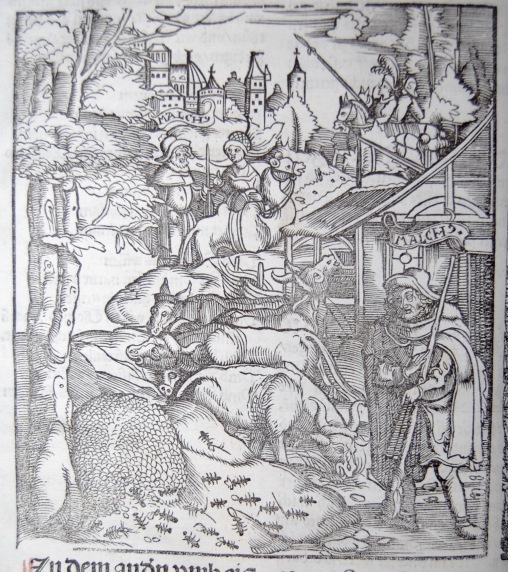 first book in German on witchcraft. In fact it is not,

This copy is bound in old (19th century) quarter sheep over marbel boards, with spine labels. It is a very nice crisp and clean copy, it has red capital strokes in manuscript as well as scribal red underlining.

Hexenwahn:
Geiler held sermons about superstition, magic performances and witches fear.With the title Die Emeis He was referring to the writings of John Nider, the Formicarius, the Malleus Maleficarum .
In 1508 Geiler  held  26 Lenten sermons addressing  the witch craze .  The saga of the milk witch originates in one of these sermons, in which he made witches for the lack of milk in charge of sick cows.  The Devil Wears consequently the milk from the cow, a witch so they can elsewhere milk from an object. The picture shows,  a witch make  milk comes from an ax. 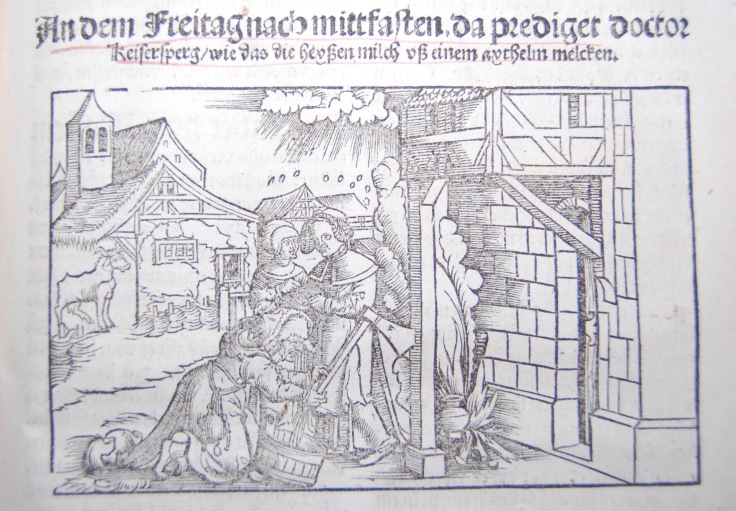 A celebrated German pulpit orator, Geiler von Kaysersberg was one of the most celebrated humanists of his era, along with Erasmus, Wimpfeling, and others. As a secular priest, he fought the ecclesiastical abuses of his age, looking to “salvation and preservation only in the restoration of Christian morals in Church and state, through the faithful maintenance of the doctrines of the Church.” (CE)

Geiler’s importance in literature must be judged by his impact on the history of the development of the Catholic sermon in its relation to purely literary (secular) history. Widely read in theology as well as the secular literature of his day, and closely associated with the humanists of Strasburg, Geiger preached at the cathedral in Strasburg for more than 30 years, a position specially created for him by the cathedral chapter, the bishop, and city authorities. 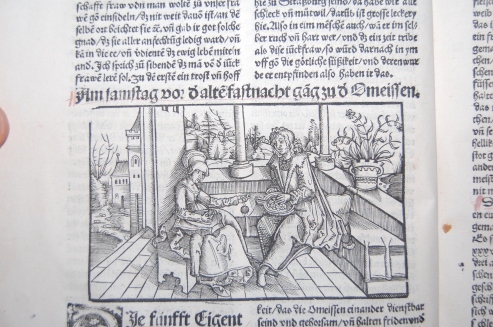 He often yielded “to the coarseness of his age. […] A man of austere morality, he never failed to show an apostolic courage towards both high and low, and exhibited an extraordinary daring in fighting vice and degeneracy of morals. Hence his works are an important source for the history of the civilization of these degenerate times. [… Because in his oratory] his thoughts were expressed in the language of ordinary life, […] posterity possesses, in Geiler’s writings, an enduring source for the knowledge of the speech, customs, and beliefs of the common people at the beginning of the sixteenth century.” (Ibid.)

“The spirit of mammon [riches or material wealth, see Mat. 6:24; Luke 16:9, 11, 13] had won such an ascendancy in the Curia that Pope Clement VII, for example, at the very height of the Reformation storm, was trying to make money from the sale of the Cardinals’ hats. It is against this background that we must understand the denunciation of the great Catholic preacher Geiler von Kaisersberg: ‘It is no longer the Holy Ghost who appoints the rulers of the Church, but the devil, and for money, for favour and by bribery of the Cardinals.” (The Roots of The Reformation, Karl Adam) 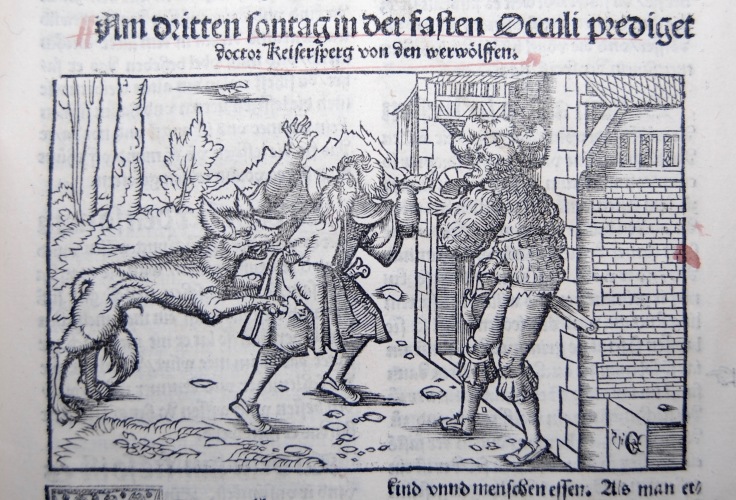 A SERMON ON WERE -WOLVES.

This strange series of sermons was preached at Strasbourg in the year 1508, and was taken down and written out by a barefooted friar, Johann Pauli, and by him published in 1516. The doctor died on Mid-Lent Sunday, 1510.

The German edition is illustrated with bold and clever woodcuts. Among other, there are representations of the Witches’ Sabbath, the Wild Huntsman, and a Werewolf attacking a Man.

The sermon was preached on the third Sunday in Lent. No text is given, but there is a general reference to the gospel for the day.

The first happens through hunger; when the wolves-“Am drittë sontag à fastê, occuli, predigt dé doctor vô dê Werwölffenn.” find nothing to eat in the woods, they must come to people and eat men when hunger drives them to it. You see well, when it is very cold, that the stags come in search of food up to the villages, and the birds actually into the dining-room in search of victuals.

“Under the second head, wolves eat children through their innate savageness, because they are savage, and that is (propter locum coitum ferum). Their savageness arises first from their condition. Wolves which live in cold places are smaller on that account, and more savage than other wolves. Secondly, their savageness depends on the season; they are more savage about Candlemas than at any other time of the year, and men must be more on their guard against them then than at other times. It is a proverb, ‘He who seeks a wolf at Candlemas, a peasant on Shrove Tuesday, and a parson in Lent, is a man of pluck.’ . . . Thirdly, their savageness depends on their having young. When the wolves have young, they are more savage than when they have not. You see it so in all beasts. A wild duck, when it has young poults, you see what an uproar it makes. A cat fights for its young kittens; the wolves do the same.

“Under the third head, the wolves do injury on account of their age. When a wolf is old, it is weak and feeble in its leas, so it can’t ran fast enough to catch stags, and therefore it rends a man, whom it can catch easier than a wild animal. It also tears children and men easier than wild animals, because of its teeth, for its teeth break off when it is very old; you see it well in old women: how the last teeth wobble, and they have scarcely a tooth left in their heads, and they open their mouths for men to feed them with mash and stewed substances.

“Under the fourth head, the injury the were-wolves do arises from experience. It is said that human flesh is far sweeter than other flesh; so when a wolf has once tasted human flesh, he desires to taste it again. So he acts like old topers, who, when they know the best wine, will not be put off with inferior quality.

“Under the fifth head, the injury arises from ignorance. A dog when it is mad is also inconsiderate, and it bites any man; it does not recognize its own lord: and what is a wolf but a wild dog which is mad and inconsiderate, so that it regards no man.

“Under the sixth head, the injury comes of the Devil, who transforms himself, and takes on him the form of a wolf So writes Vincentius in his Speculum Historiale. p. 265 And he has taken it from Valerius Maximus in the Punic war. When the Romans fought against the men of Africa, when the captain lay asleep, there came a wolf and drew his sword, and carried it off. That was the Devil in a, wolf’s form. The like writes William of Paris,–that a wolf will kill and devour children, and do the greatest mischief. There was a man who had the phantasy that he himself was a wolf. And afterwards he was found lying in the wood, and he was dead out of sheer hunger.

“Under the seventh head, the injury comes of God’s ordinance. For God will sometimes punish certain lands and villages with wolves. So we read of Elisha,–that when Elisha wanted to go up a mountain out of Jericho, some naughty boys made a mock of him and said, ‘O bald head, step up! O glossy pate, step up!’ What happened? He cursed them. Then came two bears out of the desert and tore about forty-two of the children. That was God’s ordinance. The like we read of a prophet who would set at naught the commands he had received of God, for he was persuaded to eat bread at the house of another. As he went home he rode upon his ass. Then came a lion which slew him and left the ass alone. That was God’s ordinance.  Therefore must man turn to God when He brings wild beasts to do him a mischief: which same brutes may He not bring now or evermore. Amen.”

It will be seen from this extraordinary sermon that Dr. Johann Geiler von Keysersperg did not regard werewolves in any other light than natural wolves filled with a lust for human flesh; and he puts aside altogether the view that they are men in a state of metamorphosis. However, he alludes to this superstition in his sermon on wild-men of the woods, but translates his lycanthropists to Spain.

While most of the readings for Monday reiterate the public’s need to watch for acts of witchcraft,  Kaysersberg has some relevant points about witchcraft that no other has brought up before. 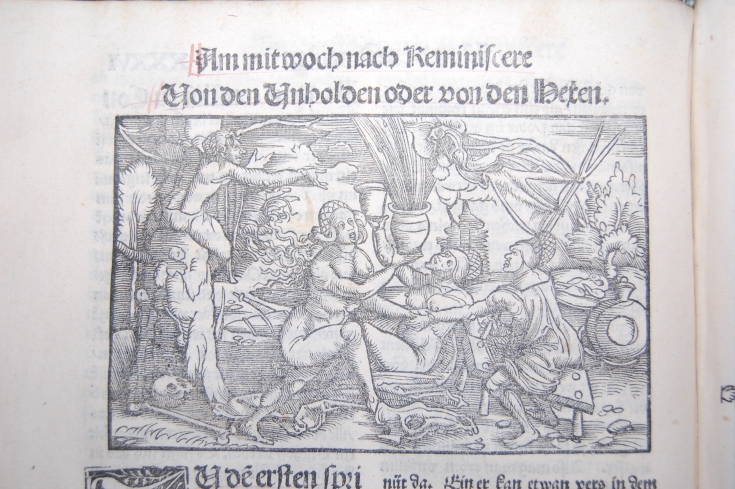 Instead of directly blaming the witches for their actions, Kaysersberg blames the Devil. It is the Devil himself who casts plagues upon the people. The witches are nothing more than a façade for the Devil’s work. I don’t remember any other writer who made this type of distinction. It is a rather unusual argument, as most people directly believed witches held the power to change weather, kill/hex people and do other nefarious activities.

Kaysersberg states that the witch, when she desires something to be done, gives a sign to the Devil.  Kaysersberg says, “the devil sees the sign and hears the word, he knows what they indicate; then he performs the act, and it is the devil who does this and not [the witches].” While the witches may have evil intentions, they do not possess the ability to carry out their actions. Rather, it is only the Devil who may grant their wish and do their bidding.

Are they capable of doing such diabolical things or is an evil spirit, the Devil, taking advantage of their ill will to do bad? Can these women truly be called witches following his belief?   Kaysersberg also gives us three reasons why women are more prone to witchcraft. He cites William of Paris for the reasons and they are similar to the reasons mentioned by the Malleus. He cites their “instability of spirit,” “understood better by demons,” and “their talkativeness” as reasons women are ‘weaker’ 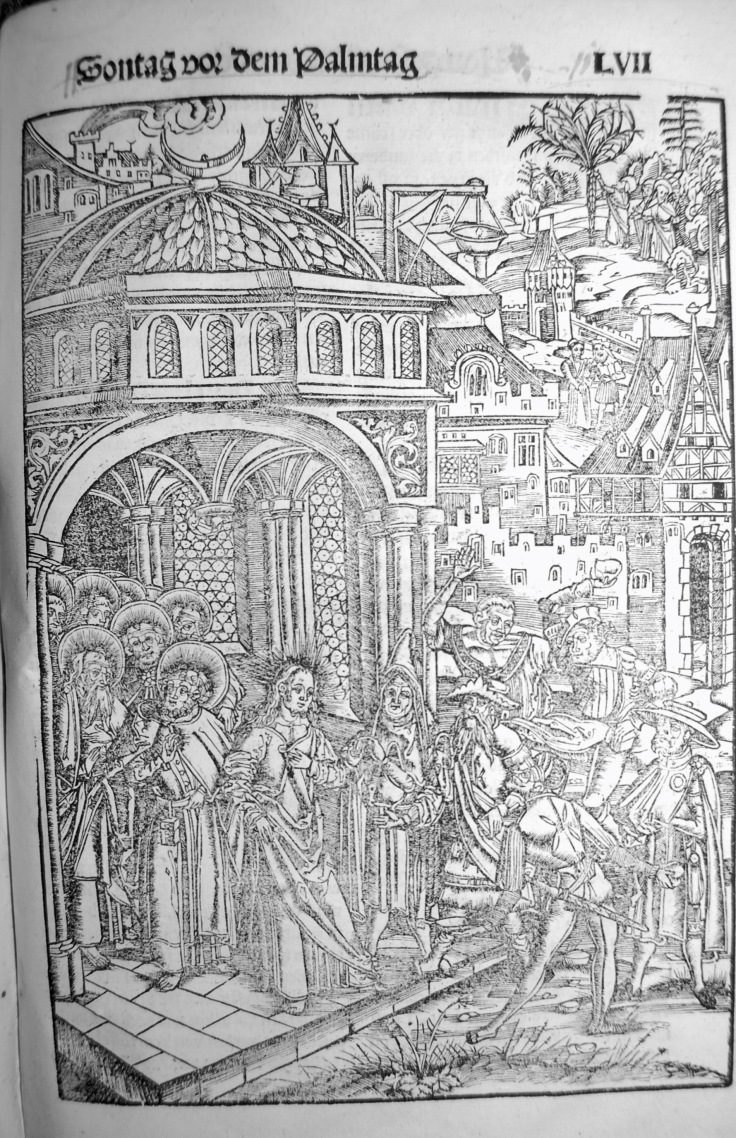