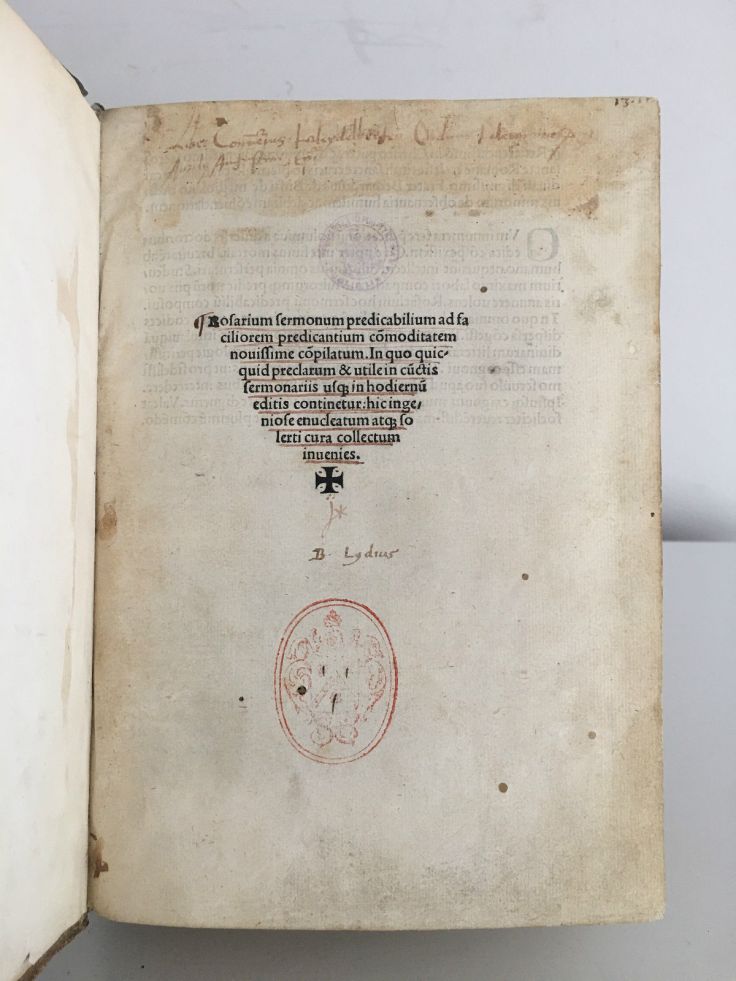 This copy is bound in its original binding of full blind stamped pigskin over wooden s-l1600-6boards with both clasps        His 16th sermon is important for the history of witchcraft.  Unlike the Dominican demonologists, de Busti treated witchcraft (for instance in his 16th sermon) as a form of idolatry and superstition, and as such as a violation of the first commandment, a kind of improper worship. While being harmful magic it was not seen as a stereotypical diabolical conspiracy. However Busti described a woman who practiced magic and renounced the catholic faith as ‘stria’, a species of female witches that had the credit of getting to the insides of men, and thus devouring them.  Sermon 16 of Bernardino Busti’s Rosarium Sermonum,  proves a rich source for the developing concept of witchcraft at the close of the fifteenth century.  The sermon elaborates on ways in which it is possible to sin against the proscription of idolatry in the first commandment.  Busti was particularly worried about three elements of idolatry common to depictions of witches: demonic involvement, ritualistic behaviors, and negation of the principles of Christianity.  By describing maleficae et maladictae feminae who renounced the Catholic faith, he contributed to ratification of the stereotype of the striga in the early modern period.

Benardino Busti and other Franciscan writers arranged the superstitious practices they wrote to oppose.  One of these was outright idolatry. Others included forms of divination, observance of omens, interpretation of dreams, use of amulets, and more elite practices such as necromancy and the ars notoria.  Also included among superstitious practices was maleficium, which could be translated as witchcraft.  Conti  (see below) argues, however, that Busti and other Franciscan writers treated maleficium still mainly as simple harmful magic, not as a practice inevitably linked to news, more terrible stereotypes of diabolical, conspiratorial witchcraft emerging in the fifteenth century. They addressed those notions too, however, and it is to witchcraft address nocturnal travel to a witches’ sabbath, the ludus Dianae, or when they describe witches’ supposed belief in their own ability to transform (or be transformed by demons) into cats.

Grounded firmly in the tradition of the canon Episcopi, observant Franciscans regarded both of these as entirely illusory–merely the deception of demons worked on the feeble minds of foolish women, and sometimes men. They were by no means unaware of other developing theories of witchcraft, however. They incorporated the notion of witches’ traveling to the ludus Dianae on rods anointed with hideous unguents, whereas the canon Episcopi refers only to women riding on animals in the train of the supposed goddess Diana, actually a demon in disguise.  Here they reflected a stereotype developing since the early fifteenth century in regions around the western Alps….they began in some ways to conflate the ludus Dianae tradition with the separate ludus bariloti, that envisioned malefactors magically entering locked houses, to feast, drink from wine barrels, and commit other indecent revelries. This ludus, Franciscan authorities were willing to posit, might reflect real, physical action, but they never allowed that to affect their judgment that travel with Diana was always completely illusory. 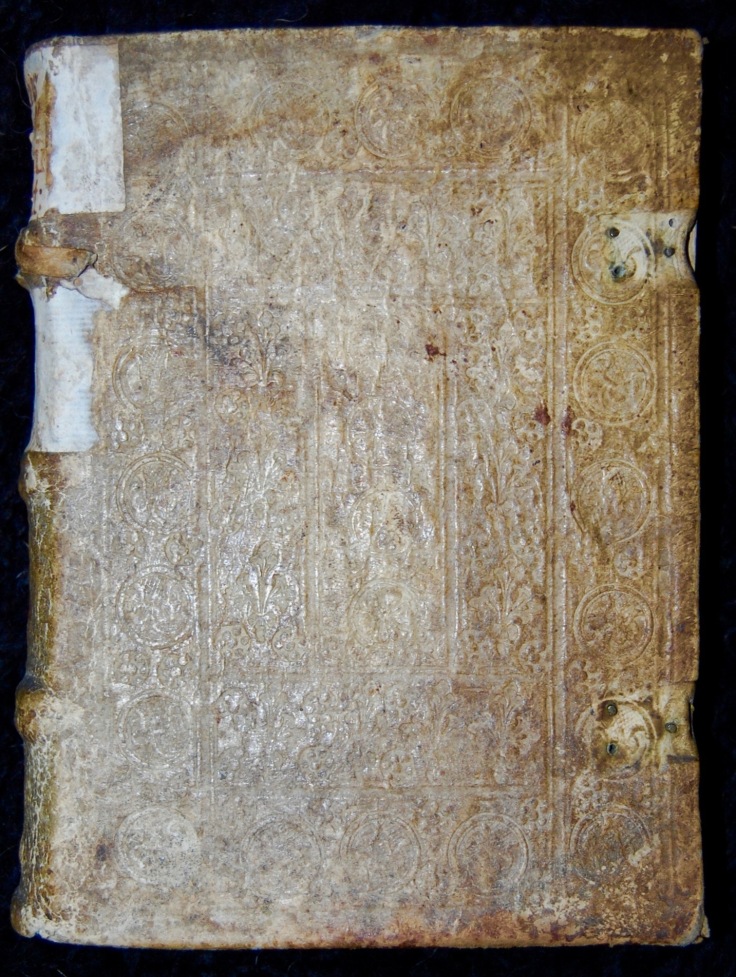 One of the great Franciscan preachers of the 15th-century, these are 92 sermons for Advent and Lent, that amount to a systematic treatment of penitence. Michael’s preaching was much admired by Bernardino da Feltre, who called him ‘alter sanctus apostolus Paulus et Christi Tuba’.

Imp[re]ssioniq[ue] Venetijs deditu[m] : Impe[n]sis Iohannis de Colonia socijq[ue] ei[us] Ioha[n]nis Manthen de Gherretzem,  before 1477 (The Paris BN copy was bought at Avignon on 14 August 1477)    $7500         Folio          π2 a-m8 n4./   70 ff n. ch. sign. a-e8, f6, g;a-b8, c6, d8 ; in-4, 219 mm   Title from incipit of Breviloquium (leaf [1st]a2r)./ Includes “Biblia Pauperum” attributed to St. Bonaventure, which is a shortened version of a text by Nicolas de Hannapes, Virtutum vitiorumque exempla, more generally called “Exempla sacrae Scripturae”. Cf. Gutenberg Jahrbuch 1936, p. 61-62./ Each work has separate signatures./ Imprint from colophon (leaf [2nd]d8r)./ Signatures: a-e8, f6, g8, [2nd]a-[2nd]b8, [2nd]c6, [2nd]d8./ {Title from the opening line of the Prologus, leaf a2./ The Biblia pauperum (leaves 2a1-2d8) is now usually attributed to Nicolas de Hannapes. Cf. BM 15th cent., GW./ Imprint from colophon./ Signatures: a-c8 f6 g8 2a-2b8 2c6 2d8./ }                      Back carton, brown calf case of the sec. XVIII with elegant decoration imprinted in gold, with title and date of the work on the front plate. Ancient note of possession to a final glance.      This is the second part only this tract   consists of one of several versions of a text going back to the Virtutum vitiorumque exempla of Nicolaus Hanapus, and generally entitled Exempla sacrae scripturae. The title ‘Biblia pauperum’ and the ascription to St. Bonaventure are both incorrect”.  (V. Scholderer in Gb Jb 1936 pp.61-62, reprinted in Fifty Essays (Amsterdam, 1966) pp.140-41: Version E)
Rather than a ‘Pauper’s bible’ this book is in actuality a “religious exempla” (cautionary stories used to aid preaching)   The book presents thousands of examples drawn exclusively from the Bible that enable preachers to illustrate their teaching on virtues and vices and to help the faithful to behave Christianly in public and private life, The moment of death. It was printed for the first time in Venice in 1477 and attributed to St. Bonaventure . It is frequently reissued under various titles. For example, Summa virtutum and viciorum (Cologne 1544, and Paris 1548), Virtutum vitiorumque exempla ex universo divinae scripture promptuario desumta , Flores biblici , Exempla biblica (Augsburg, 1726), or simply as the ‘Bible of the Poor’ , Probably because these narratives were easily understood, and because the publishers had arranged them in alphabetical order               Goff B858; BMC XII 16; Walsh 1701
(US copies :Folger Shakespeare Library
HEHL (var)
HarvCL
Indiana Univ. (Biblia pauperum only)
LC
Southern Methodist Univ., Bridwell Library
The Newberry Library
Univ. of Illinois at Urbana-Champaign Library (-)
Vassar College

This copy is Rubricated throughout with nicely complicated red initals, It is is mound in an age apropraite binding of full calf over wooden boards wit clasps and catches with quite impressve end bands.

“Middleton, Richard of [Richard de Mediavilla] (d. 1302/3), Franciscan friar, theologian, and philosopher, was born about the middle of the thirteenth century in either England or France. The issue of his country of origin has given rise to much discussion, and remains unresolved, but it is at least possible that he was a member of the Northumberland family of Menevill or Meynil, whose name was Latinized as Mediavilla. It is certain, however, that he studied at Paris, where he formed part of the so-called neo-Augustinian movement, defending the philosophy and theology of Augustine against the inroads of Aristotelianism, during the years 1276–87. He probably studied under William of Ware and Matteo d’Acquasparta, usually viewed as principal figures in this movement. However, a number of his theses step outside the ordinary confines of this tradition flowing from Bonaventure, for he often sides with the Aristotelian movement as manifested in the works of Thomas Aquinas, especially when dealing with the nature of knowledge.

Middleton’s Commentary on Peter Lombard’s ‘Sentences’ was probably begun in 1281 and was completed in 1284, when he became regent master of the Franciscan school in Paris, a post he held until 1287. The chief characteristic of his Commentary is its sober assessment of many of the positions of Thomas Aquinas. However, the tone of his eighty Quodlibet Questions, produced during his regency, is much more critical and on many issues shows a strong anti-Thomist reaction. In this they have more in common with his disputed questions, which were argued after the condemnations of 1277 but before his Sentences commentary. The latter commentary has been edited along with his Quodlibet Questions. A small number of his disputed questions have also been edited, as have six of his sermons.

Middleton’s link to the neo-Augustinian movement is seen especially in his treatment of the will, even though he does not entirely follow his teachers, Ware and Acquasparta. For Middleton the will is much more noble than the intellect, since it is much more noble to love God than to understand him. Understanding without the corresponding love separates man from God. However, the key to the will’s nobility is its freedom. The intellect is forced by evidence when evidence is given; the will also is forced by its nature to seek the good, but it is free in choosing the means to its predetermined goal. Even if the intellect were prudent enough to show man the best means to his goal, he would not be forced to adopt them. ‘For although the intellect, like a servant with a lamp, points out the way, the will, like the master, makes the decisions and can go in any direction it pleases’ (Stegmüller, 722). 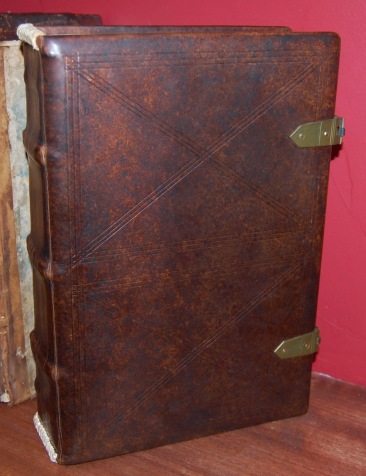 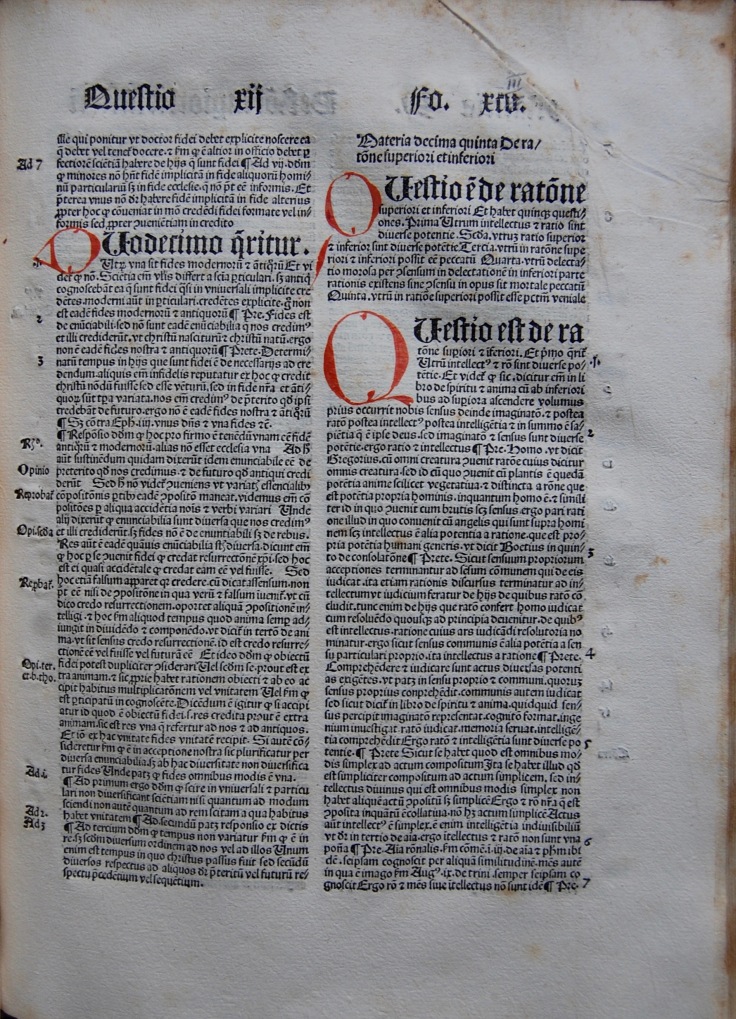 The superiority of the human will over the intellect further manifests itself in Middleton’s conception of the nature of theology. Certainly, the study of the scriptures attempts to clarify human knowledge of both creator and creatures; principally, however, it aims to stimulate man’s affections. Middleton believes that scripture prescribes laws, forbids, threatens, attracts man through promises, and shows him models of behaviour that he should follow or avoid. The study of scripture perfects the soul, moving it toward the good through fear and love. It is more of a practical science than a speculative endeavour. A theology that is speculative is one that models itself on the theology of the metaphysician or philosopher and tends to reduce Christian faith to reason.

The influence of Aquinas is more in evidence in Middleton’s theory of knowledge. Middleton rejects the illumination theory of Bonaventure and his more loyal followers. Man’s intellectual knowledge can be explained, he argues, by the abstraction performed by the agent intellect from the singulars experienced by the human senses. In short, human individuals know, and they know by means of their own intellectual efforts, not by some special divine illumination. Unlike those who endorse the illumination theory, Middleton contends that there is no direct knowledge of spiritual beings, including God. God is not the first thing known. He can be known only by starting with creatures and by reasoning about their origins or final end. Middleton died in Rheims on 30 March 1302 or 1303.” [Oxford DNB]
Goff M-424;BMC V 206.