One of the most wonderful books I’ve read! An history of the wonderful things of nature! 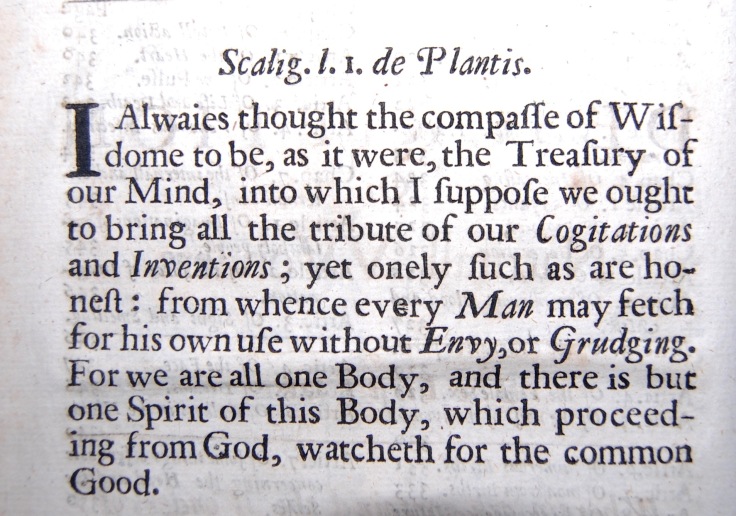 An history of the wonderful things of nature: set forth in ten severall classes. Wherein are contained I. The wonders of the heavens. II. Of the elements. III. Of meteors. IV. Of minerals. V. Of plants. VI. Of birds. VII. Of four-footed beasts. VIII. Of insects, and things wanting blood. IX. Of fishes. X. Of man. Written by Johannes Jonstonus. And now rendred into English, by a person of quality.

legible, (the heavy browning affects the first part of the book) the rest of text has pale age-browning and spotting, an occasional ink splash, small loss to 1 lower corner, neat ink name on endpaper, otherwise an acceptable working copy, good copy only.

The first (and only?) translation, by John Rowland, of: Jonstonus, Joannes. Thaumatographia naturalis. It is a collection of observations and references of natural marvels, retrieved from all ancient and contemporary literature, and organized by the author into a series of distinct sections. Jonston organizes the text into ten classes that describe: the heavens, the elements, meteors, minerals, plants, birds, quadrupeds, insects and bloodless animals, fish and men. The fourth on fossils and minerals is quite extensive with references to Albertus Magnus, Pliny and Theophrastus. A section within the class of plants, discusses tobacco and includes early references to nature in America.

Some of my favorite parts! (transcribed)

CHAP. XIIII. Of Juices that grow into stones.

I had allmost forgot juyces that harden like stones. Nature hath wonderfully spo•ted herself in them, sometimes it hardens be∣fore it touch the ground, and somtimes when it is fallen down. Both these ways are seen at Amberga, where there are white pillars made by it. Agricol. l. de effl. ex terra. What ever drinks it in, is made a stone, if it be but porous. Hence you shall find stony Fountaines▪ and Wood and Bones that are dug up. When the workmen in time of Warr fled into the Mines of Lydia, about Pergamus, the entrance be∣ing shut up, they were strangled, the den was afterwards made clean, and there were found Vessels of stone fill’d with a stony juyce. About the Coast of Elbog, there are great-firr Trees, with their barks, in the cracks whereof a fire stone of a Golden colour growes. About Cracovia in Bohemia, there are Trees with boughes, out of which there are Whet-stones with corners; which was a Present▪ sent from the Lords of Columbratium, to Ferdinand the first. Hildesham hath beames laid upon heaps; the heads of these somtimes stick forth, these being stricken with Iron or with another stone, not unlike the marble at Hildesham, they smell like the sent of burnt horn. There is also Wood changed into a stone, and in the cracks of it there is Ebony dug forth, which T•eophrastus was not ignorant of, that it lay hid scattered in the hollow o• other stones. Looking Glasses, rubbing Cloths, Garments, Shoos, being brought into a quarrey in Assus of Troas become stones, Mucianus. But stones that congele from juyce are commonly soft and brittle. In the hot Baths of Charlsthe 4th, many stones together are found, hollow like Hives, half Globe figu∣red, so great as pea•e, they grow from the drops of the hot waters falling down. But those earthen Vessells that are found in the Earth; were Pi•chers for dead mens bones, because in all of them covered with lids, there were ashes, and in some Rings were found, wee saw such a one in the Library Thoruniense. It was the fashion of the Antients, as all know, to burn and lay up their ashes. In Italy also some urns were found of glasse. Caesar Carduinus had foure found in the fields of Naples: but what hapned at Verona, see Bertius in desc•i. agri Veronen.

MEteors are made of Exhalations, the Sun and the rest of the Stars draw them forth; and the subterraneall fire is the worker of very many of them. We shall speak nothing of them. These are some hurtfull, some safe, as may be proved by many Examples. At the foot of the Mountain Tritulum Halveatum, there are waters you must ascend by 43 degrees; to a place of sweating, It is in length three miles, the more you are lifted up above them, the hotter you are; the more you descend into them, the cooler. Those draw flegme from the parts, and cure distillations from the head. There is a hot Bath near the hot waters that run forth of the Lake Agnanum; The ditches are covered with Turves of grasse, and stones being removed, a hot vapour is sent out, that makes them sweat that receive it. Out of Avernus a Lake of Campania, before Agrippa had cut down the Woods that covered it, and laid it open, the Exhalations were so thick that came forth, that the birds were killed that flew over it. At the Lake of Agnanum in Italy, there is a Mountain, in which there is a narrow Cave, it declines moderately downwards, being 8 foot long; if you touch the earth of it with your foot or hand, it feels hotter than the rest, it choaks any living creature that is cast in by the venomous blast, deprives them of sense and motion, though you pull it out pre∣sently; but cast the same presently into the next Lake, it is a wonder how it restores their life again, Camer. Cent. 7. Mirab mem. 50. In the Island Ebusus, Exhalations do so infect the ground, that if they fall upon places where Serpents are, the pestilent Creatures cannot endure them. In the great places of refreshment at Baianum there is a ditch, the water whereof sends forth such hot vapours, that wax Candles will melt, & be put on• by them; and they are so pernicious, that men fall down dead therewith. In Babylon there is a Cave also, out of which riseth such a pestilent vapour, that it kills all that draw it in. Also Pluto∣nium in a little hill of a Mountainous Country hath so moderate a mouth, that it can receive but one Man, but it is wonderfull deep: It is compassed about with square pales, and that so many as would compasse in half an Ac•e, which are so full of clowdy thick dark∣nesse, that the ground can hardly be seen. The Ayr hurts not those who come to the outside of the pales, as being clear from that dark∣nesse, when the winds blow not; If a living Creature goes in, he dies immediately. Bulls brought in fall down, and are drawn forth dead. Lastly, at Hierapolis in Syria, as Dio in the Life of Trajan writes, there is a den of a filthy and deadly smell; what living creature sucks it in, is destroyed by it; Only Eunuchs are free from the venom and hurt of it, Scaliger, Exerc. 277. Sect. 4.

CHAP. XIX. Of the Salmon, and the Turdus.

A Salmon about Colen is two cubits long, and they are greater amongst the Miseni; and at Dessavia, neere the River Albis, from 24, to 36, pounds weight. In Helvetianeere Tigurus they are ta∣ken somtimes above 36, pound weight. Albertus saith, the intestine of it, is divided into many parts like to fingers. Gesner writes, that he observed two passages from the very throat of one that he dissected: they stretched downward, one to the Maw by the Wezand, and the other was namelesse. In the River Mulda neere to Dessavia, if the Sal∣mon striving to overcome the precipice of the water, be frustrated at the second or third leap, he swims to the foard, and there he will lye hid under stones and gravel, and pine away: he is full of brasse co∣lour’d spots, and his beck is bent like a great hook. In Scotland in Autumn they meet in little Rivers or places fordable, where they joyne bellies, and lay eggs, and cover them in the gravel▪ at which time the male is so spent, spending his milt and seed, and the female with her spawn, that they are nothing but bones and prickels and skin. That leannesse is infectious, for they will infect all the Salmons they come neere. It is an argument thereof, that oft times they are taken, and one side is consumed, the other not so. From their eyes covered in the sand, little fishes breed the next spring that are so soft, that untill they be no bigger than a mans finger, if you presse them with your fingers, they will run as from congeled moysture. Then first, as Nature leads them, they hasten to the Sea, and in 20, days, or a little more, it is incredible how great they will grow, when they come from the Sea, against a River that runs thither, they shew a wonder. For the Rivers that are straightned with Rocks, and Banks, on every side, and therefore run down swiftly, when they fall with a great fall, the Salmons do not presently swim forth by the Channel, but they fling themselves up crooked by force of the water, and so are carried in the Ayre, before they fall. That they are live∣ly, is seen by their heart taken forth. Robertus Constantinus testifies that he saw the heart of a Salmon that was unbowelled, that was wet with a moyst sanies, and it lived after it was taken forth above a day. There are some different kinds of Turdi. Some have as it were some skiny yellowish Apophyses hanging down from their lower chop▪ somtimes they vary, and are all for the most part Gold colour, or colour of the Amethyst or blew. Their eyes are extreme great, and a black circle goes about a Golden Apple▪ a Golden circle about the black, and lastly a black circle goes about them all. The fins by the gills are wholly Gold colour, but of the brest they are all blew, except their nervs that are Gold colour’d. The fin that is from the anus, and that which is on the back, and taile, where they are joyn’d to the rump, are Gold colour’d, but sprinkled with little red blood spots, the rest are blew.

and so much More…