Letters from the living to the living, Relating to the Present transactions both Publick and Private. With their several answers. Under the following Heads, Viz. Reformation. The P— of P–pl–r, to a City Knight, for some years since one of the Elect, but now under a State of Reprobation, &c. Sing-Song Tigellius the Undone, the Unfortunate Tigellius, to his Brethren at Will’s Coffee-House. Clement the Pope, to the Doge, and Republick of Venice. Mr. J— F— to Mr. J— P— Abridgment a Bookseller, to Original an Author. The Two hundred Maidens at the Bath, to the Virgins in Oxford. The Duke of Burgundy to the King of Spain. Tom Double to his Brother Under-Spur-Leather in the Country. John D— by the Pharisaical Printer, to John T–d the Scribe. From a Voluntier at St. Maries to his Friend in London. A Letter from a young Officer at Vigo, to his Friend at London. Gossip Murray the Projector to Inquisitive Love-News. Written by Several Hands.

Octavo 4 3/3 X t 1/2 inches A-O8 P4 *4 **8 First Edition This is bound in original full panneled calf it is quite a nice copy,rebacked about 30 years ago. This is an imitation of Brown’s Letters from the dead to the living Brown’s Letters from the Dead to the Living, had gone through several editions, and this is a fairly obvious climb onto that bandwagon. But it has some distinct moments: “Case-harden’d Abridgment” the bookseller embodies the fashion for producing abridgments of works in order to circumvent copyright: “it’s every Man’s Copy, provided you take only [the author’s] Sense, and not make use of his Words.” And so author “Original” should add himself “to the rest of my Scribes, that are now under my Pay, and Writing whatever comes upper-most, that we may be the first that comes out to Cheat the World.” Apparently there are two states of the text of this book. In this copy, the earlier state, there is a passage in a letter and poem from “Inquisitive Love-News” attacking the debt-written owner of “Chelsea-house.” second numbering [p19-22] This must have been deemed too risky, as the two leaves in this state were afterwards cancelled and replaced by a single leaf. 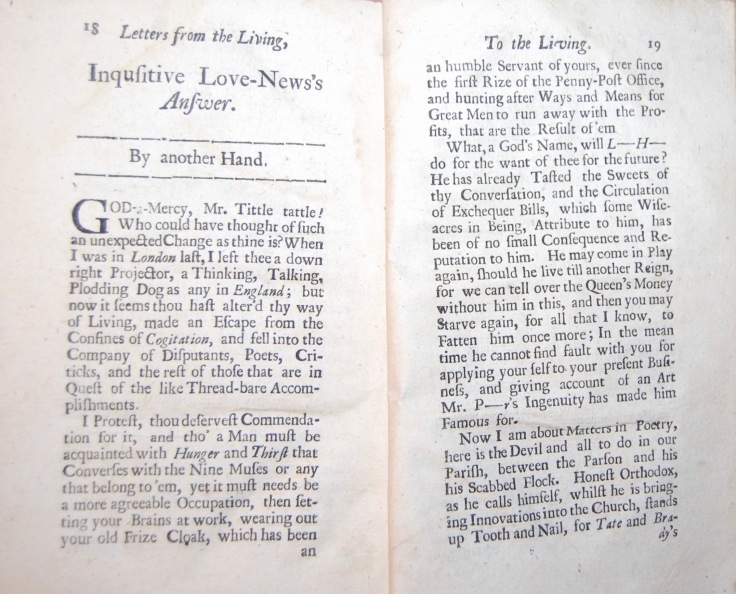 And of course a very early use of the phrase “Son of a Bitch to describe a person!!!