Sermons of M. Iohn Caluin, on the Epistles of S. Paule to Timothie and Titus. Translated out of French into English, by L.T.

Bound in contemporary English calfskin over thin wooden boards, rebacked and with wear 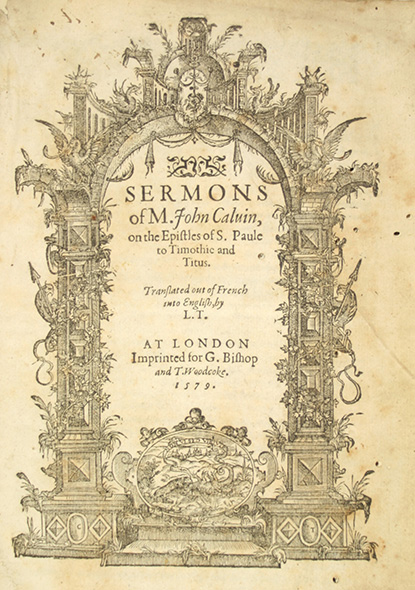 to the boards. This is a large copy and the text is fine condition aside from soiling to the first leaf, a few pinprick wormholes, a small dampstain to the margin of the last few signatures, and adhesion scarring to the final leaf.Provenance: John King, ex libris dated 1750; Elizabeth King; John Mendham, Clophill, 1838 (given to him by G.B. Dart Esq.); Law Society, armorial bookplate.

“Most prominent among the means Calvin used to reform the city (Geneva) was preaching. Every other week he preached every day in plain, direct, convincing fashion, without eloquence, but still irresistibly; and the life that the preacher led constituted his strongest claim to attention. The reports of his sermons are probably form notes made by his hearers; which was the easier done, because, being asthmatic, he spoke very slowly.”(New Schaff-Herzog Ency. Rel. Knowl., II:357.)

John Calvin’s 54 sermons on 1 Timothy and 30 sermons on 2 Timothy were preached on Sundays at Saint Pierre in Geneva between 1554 and 1555, if we follow the chronology indicated by both Richard Stauffer (cf. Cottret, 1995:366), and T.H.L. Parker (1992:163). This chronology is discussed at some length by Parker in his study, entitled Calvin’s Preaching, and rests on Denis Raguenier’s Catalogue, as copied by Nicolas Colladon in his Vie de Calvin. Actually, Calvin’s preaching on 1 Timothy started on Sunday morning, 16 September, 1554, while his first sermon on 2 Timothy is dated some seven months later, i.e. 21 April, 1555, the whole series probably completed on Sunday afternoon 11 August.