For those of us who wonder about the, all be it slow, Crashing of the stock market and the growing interest in Fantasy Sports Gambling; Geomancy and its history might be a relevant point of entry into the exploration of the all too human desire to incorporate the expression of the random into a view of the future?

““A violent order is disorder; and a great disorder is an order.
These two things are one.”

But before Stevens, Stéphane Mallarmé, and in particular his 1897 poem Un Coup de Dés Jamais N’Abolira le Hasard [“A throw of the dice never will abolish chance/hasard”] Explored in a completely poetic (and Hegelian) way the  common problematic that locates confusion at the center of our media and sensory experience. 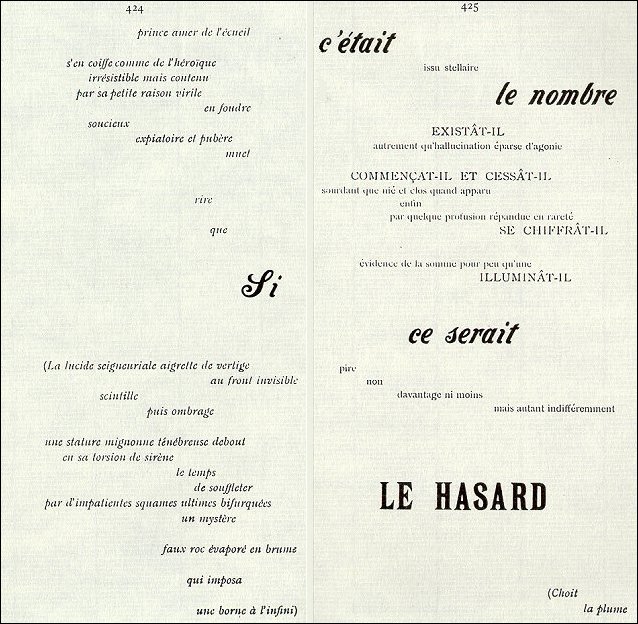 And yes, we are still seeing our reality is being cast like dice…

Geomancy {Greek: γεωμαντεία, “earth divination”} starts with generating random numbers. It gets its name from the original method of generating random numbers by making dots in the dirt. Pen and paper is easier for us. Flipping coins also works. Whatever method you choose, it is important to concentrate on the question of interest while generating the numbers.  It was one of the most popular forms of divination throughout Africa and Europe in the Middle Ages and the Renaissance. But of course literary types are wise to the folly of embracing chance, Geomancy’s first mention in print was in William Langland’s Piers Plowman where it is unfavorably compared to the level of expertise a person needs for astronomy (“gemensye [geomesye] is gynful of speche”). In 1386 Chaucer used the Parson’s Tale to poke fun at geomancy in Canterbury Tales: “What say we of them that believe in divynailes as …geomancie…” Shakespeare and Ben Jonson were also known to use geomancy for comic relief. Dante Alighieri’s Divine Comedy makes a passing reference to geomancy. In the first two stanzas of Canto XIX in the Purgatorio,

It was the hour when the diurnal heat

no more can warm the coldness of the moon, vanquished by earth, or peradventure Saturn,

rise by a path that long remains not dim…
— Dante Aligheri, referencing the Greater Fortune (Fortuna Major) and the Way (“the path”)

Traditionally, geomancy requires a surface of sand and the hands or a stick, but can be done equally well with a wax tablet and stylus or a pen and paper; or even on your iPhone, online gambling, e-trading… the similarities are unavoidable….  ritualized objects may or may not be desired for use in divination. Often, when drawing marks or figures, geomancers will proceed from right to left as a tradition from geomancy’s Arabic origins, although this is by no means mandatory.   Modern methods of geomancy include, in addition to the traditional ways, computerized random number generators or thrown objects; other methods including counting the eyes on potatoes….

Well, the book I am working with today gets deep into the technical “Scientific” aspects of the Method or Generation! It is a thick serious book full of plates and diagrams. 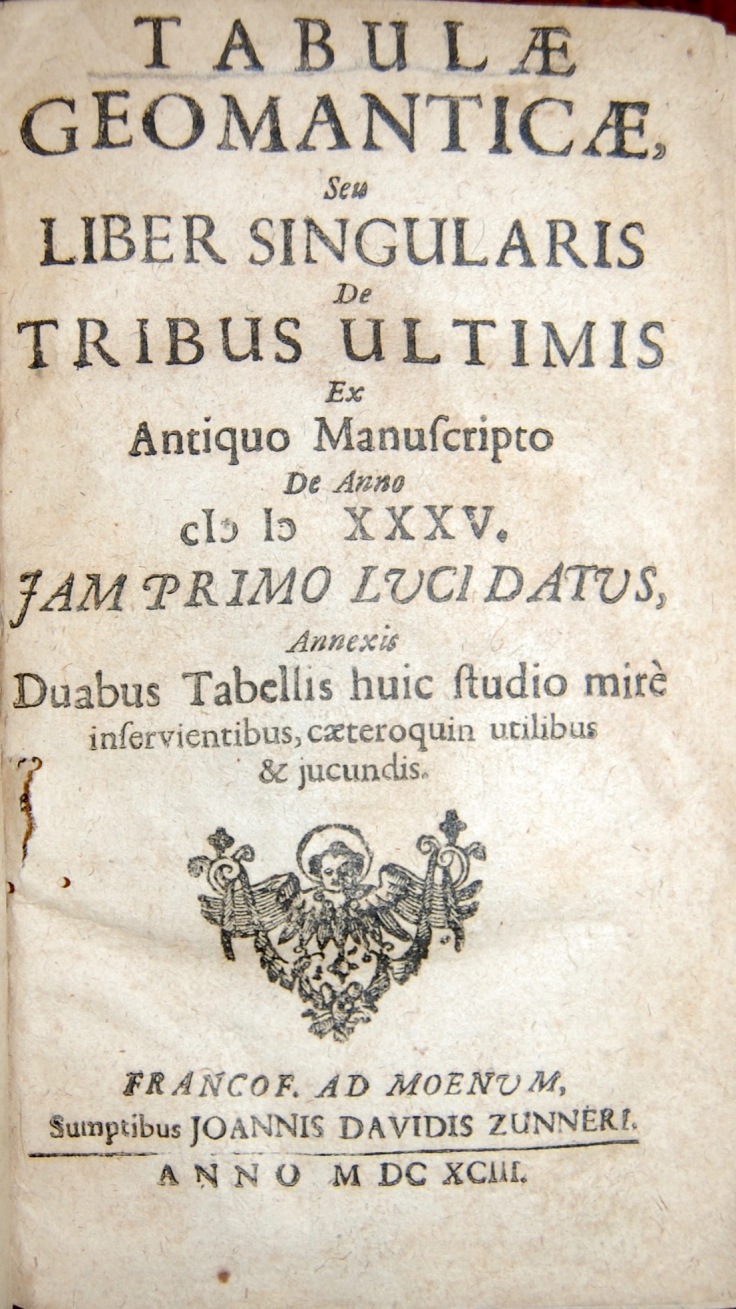 This compilation of Latin treatises on geomancy includes, among others, Robert Fludd’s Tractatus de geomantia, H. de Pisis’ Opus geomantiae completum in libros tres, and Quaestiones geomantiae Alfakini, here attributed to Platon de Tivoli but, according to Charmasson, based on the treatise of Gerard of Cremona ( (c. 1114–1187) was an Italian translator of scientific books from Arabic into Latin) . 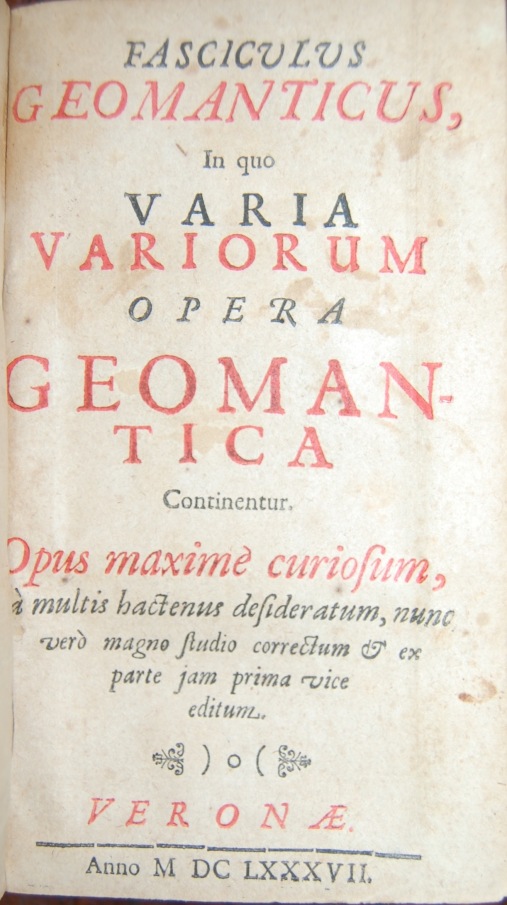 “[T]he practitioners of the art have found geomancy to be a true science through which things future, present, and past may be revealed, provided the geomancer’s judgement is not obscured by the obnoxious influences of the body or the deceitful actions of the senses.” (Richard Fludd 1617, in Josten 1964). Always remember: “The science of geomancy is very occult and inward; it is difficult to account for it in a rational way. Geomancy transcends vulgar understanding to which it must appear foolish, inane, absurd, and ridiculous.”

This copy is bound in full original vellum, soiled but solid.   The Tabulae is with out an author The second book bound here, is a collection ofgeomantical treaties, including texts by Robert Fludd and H. De Pisis and an article ”Quæstiones geomantiæ Alfakini” which is attributed to Platon de Tivoli, but which is probably based on a text by Gerard de Cremona. : 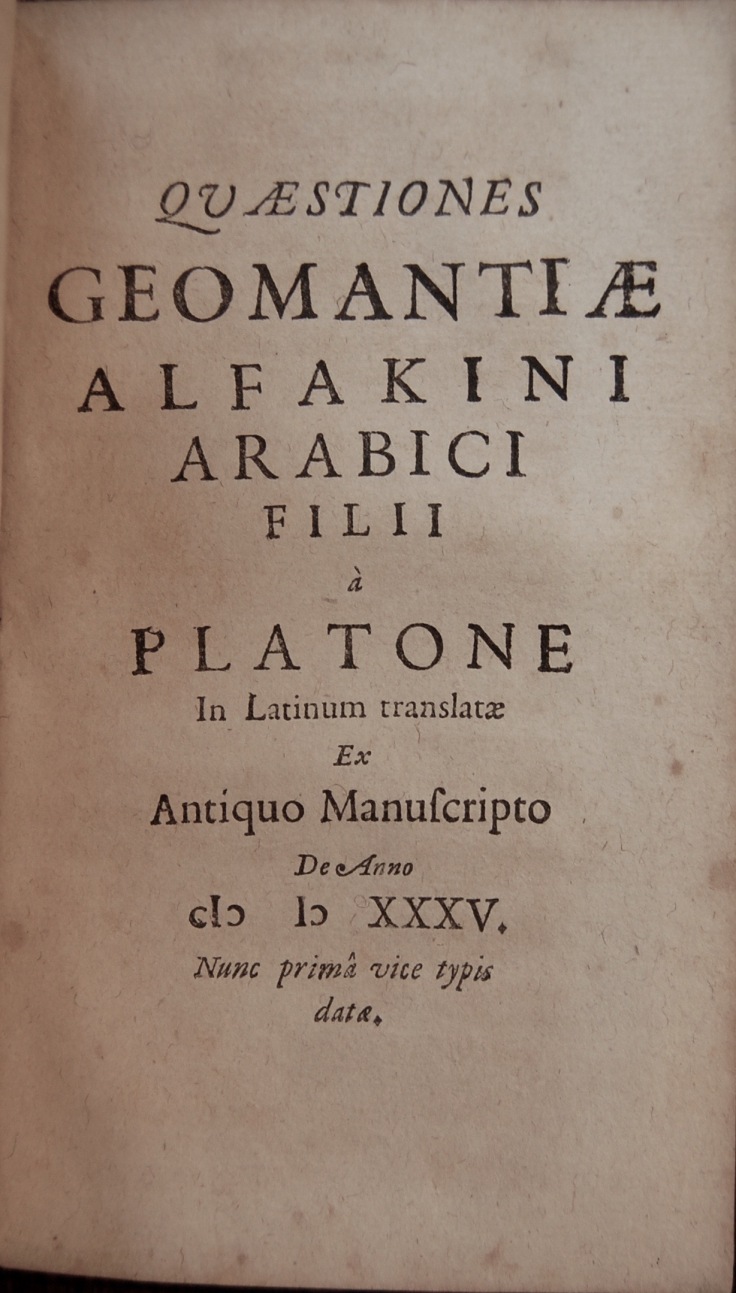 Geomancy, from Ancient Greek ge manteía translates literally to “foresight by earth”; it is a translation of the Arabic term ilm al-raml, or the “science of the sand”. Earlier Greek renditions of this word borrowed the word raml (“sand”) directly, rendering it as rhamplion or rabolion. Other Arabic names for geomancy include khatt al-raml and darb al-raml. Geomancy is thought to have established roots in the Middle East when returning Arabic merchants brought the esoteric knowledge from East Asia via the Silk Road. The original names of the figures were traditionally given in Arabic, excluding a Persian origin. The reference in Hermetic texts to the mythical um um al-Hindi potentially points to an Indian origin, although Skinner thinks this to be unlikely. Having an Islamic or Arabic origin is most likely, since the expansive trade routes of Arabian merchants would facilitate the exchange of culture and knowledge. European scholars and universities began to translate Arabic texts and treatises in the early Middle Ages, including those on geomancy. Isidore of Seville lists geomancy with other methods of divination including pyromancy, hydromancy, aeromancy, and necromancy without describing its application or methods; it could be that Isidore of Seville was listing methods of elemental scrying more than what is commonly known as geomancy. The poem Experimentarius attributed to Bernardus Silvestris, who wrote in the middle of the 12th century, was a verse translation of a work on astrological geomancy. One of the first discourses on geomancy translated into Latin was the Ars Geomantiae of Hugh of Santalla; by this point, geomancy must have been an established divination system in Arabic-speaking areas of Africa and the Middle East. Other translators, such as Gerard of Cremona, also produced new translations of geomancy that incorporated astrological elements and techniques that were, up until this point, ignored. 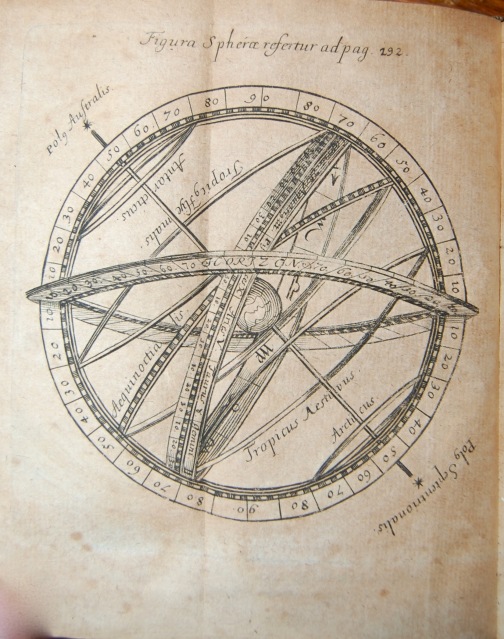 From this point on, more European scholars studied and applied geomancy, writing many treatises in the process. Henry Cornelius Agrippa, Christopher Cattan, and John Heydon produced oft-cited and well-studied treatises on geomancy, along with other philosophers, occultists, and theologians until the 17th century, when interest in occultism and divination began to dwindle due to the rise of the Scientific Revolution and the Age of Reason.

Having spent a fair amount of time leafing through this book, I am still amazed by the sustained effort that truly dedicated practitioners have spent on this seeming, to me, fatal effort: For those of you how have more endurance or might I say faith in this, this book offers more methodology that I can bare!

Please explore it and enjoy!