So,a day doesn’t go by in which I don’t see a tattoo or an interesting piercing or some one with ‘gauges’ It is reassuring to see that this expressive use of ones personal body while, ancient and maybe even natural , is still worthy of sustained interrogation, while Cultural Anthropologists are tickled pink to do cross cultural analysis of body marking and manipulation, John Bulwer certainly made a Great and amusing  kick off to this project! 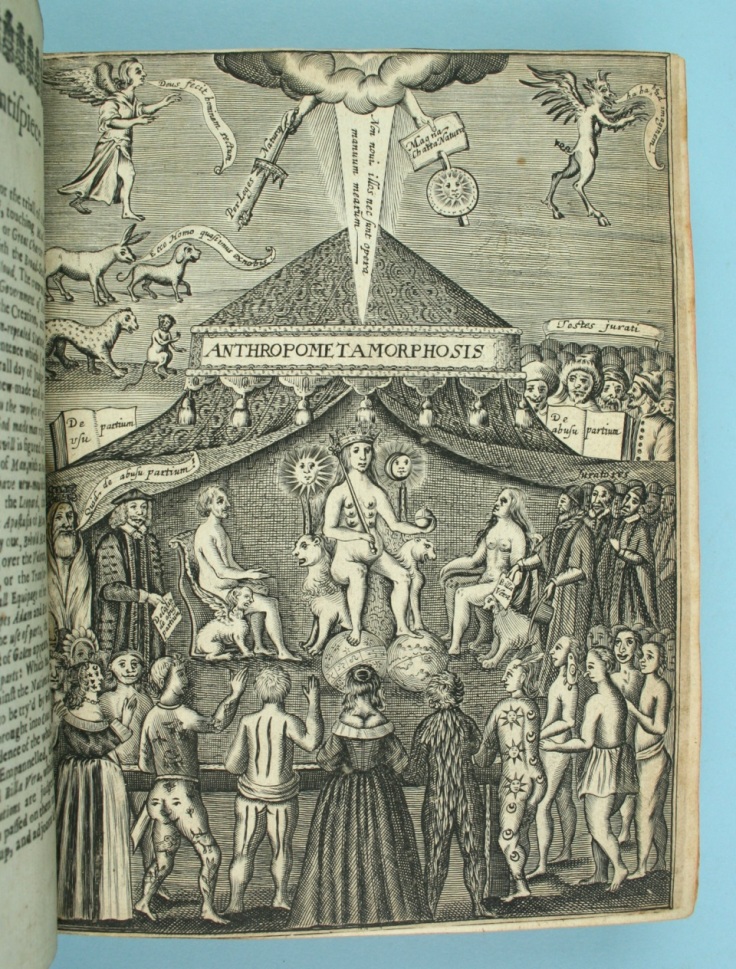 Anthropometamorphosis: = man transform’d: or, the artificiall changling historically presented, in the mad and cruell gallantry, foolish bravery, ridiculous beauty, filthy finenesse, and loathsome loveliness of most nations, fashioning and altering their bodies from the mould intended by nature; with figures of those transfigurations. To which artificiall and affected deformations are added, all the native and national monstrosities that have appeared to disfigure the humane fabrick. With a vindication of the regular beauty and honesty of nature. And an appendix of the pedigree of the English gallant. Scripsit J.B. cognomen to chirosophus. M.D

SECOND EDITION. THE FIRST ILLUSTRATED EDITION. The first edition of 1650 was a duodecimo with an engraved frontispiece only. This copy is bound in 18th century mottled calf, ruled in gold, the spine richly gilded, lacking spine label. Leather of joints a little cracked. Wear to outer edge of the top board, discreet repair to head of spine. The contents are in very good condition with only a few insignificant stains, one natural paper flaw with no loss, and one woodcut lightly crossed out. The engraved frontispiece signed: T. Cross sculpsit” and the portrait is signed: “W: Faithorne sculp.” An unsigned leaf bound after S2 contains woodcut illustrations on both sides. The text is illustrated with many woodcut images showing the various types of body modifications and mutilations performed by diverse cultures worldwide (see below). The illustrations are striking in their bizarreness lending the already captivating text a more profound impact. 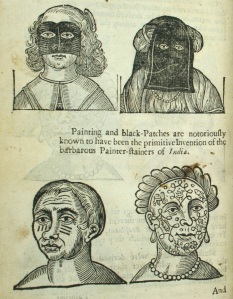 “’Anthropometamorphosis’ was one of the first early modern works of what now might be termed comparative cultural anthropology, and an early study of the body as social metaphor.”(Montserrat, “Changing Bodies, Changing Meanings”) “The subject and abundant illustrations make it a desideratum in any collection of curiosa, for it describes and illustrates every conceivable alteration of the human body by man’s design or by nature.”(Pforzheimer)

“John Bulwer’s ‘Anthropometamorphosis’ is widely recognized as the first cross-cultural history of body modification. In a series of chapters dedicated to the variety of ways in which the parts of the body – the head, hair, facial features, limbs, and genitals- can be transformed, Bulwer’s text provides a comparative overview of a wide range of modification practices, including tattooing, piercing, shaving, painting, branding, and scarification. Describing his study as a work of ‘Corporall Philosophy’, Bulwer’s approach to his material ranges form the ethnographic –for instance, his chapter on the modification of genitalia (‘the privy parts,’) the longest in the book, contains detailed accounts of genital piercing, testicular implants, circumcision, [female genital mutilation, and castration amongst ‘primitive’ cultures- to the folkloric, including popular and apocryphal stories about ‘monstrous’ races culled from ancient sources. The chapter on ‘Auricular Fashions’ is typical of the latter aspect of the book, citing Solinus’ description of the inhabitants of Fanesii, ‘whose ears are dilated to so effuse a magnitude, that they cover the rest of their bodies with them, and have no other cloathing.’ (p. 141). 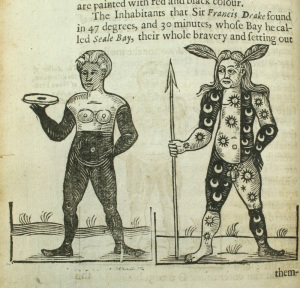 “Bulwer’s book is a landmark publication in two ways. Firstly, it reflects an epochal shift in the dominant mode of thinking about bodily change. Whereas earlier texts like Paré’s ‘Des Monstres et Prodiges’ (1564) primarily considered transformation as something that happened spontaneously and unpredictably to people, Bulwer’s focus is on acts of intentional modification, on practices of self-making that are deliberately undertaken by the subject him/herself. Secondly, the book is the first text, as far as I am aware, to incorporate descriptions of contemporary English fashion alongside exoticized representations of historically historically or geographically distant cultures. In his appendix on ‘The English Gallant’, for instance, Bulwer undertakes a comparative analysis of contemporary English fashions and ‘primitive’ forms of body modification, comparing codpieces to penis gourds (p. 540) and arguing that the 17th century style of the tall ‘sugar-loafe’ hat, with its conical shape, is motivated by the ‘same conceit’ as that found among the Macrones of Pontus and the Macrocephali, ‘among whom they were esteemed the best gentleman who had the highest heads’ (p. 531).

“In the century previous to Bulwer’s, an earlier medieval understanding of the monster as a divine warning or religious omen to be deciphered had gradually transformed into a newly secularized concept of the monster as a figure of unnaturalness and deformity… Whereas monsters in the Middle Ages were represented as ‘elsewhere’, the early modern period relocated monsters from the margins to the middle of culture, both reflecting and precipitating a transformation in their cultural function and significance… “For Bulwer, self-formation is by definition deformation, a transfiguration and disfigurement, because it produces a deviation from the natural shape of the body. When English ‘gallants’, like the peoples of primitive cultures, presumptuously take the shape of the body into their own hands, they render their bodies artificial and unnatural, and it is precisely this that makes them monstrous in Bulwer’s eyes.”

The Homunculus: Bulwer includes a short discourse on Paracelsus’ assertion that it is possible to produce “homunculi” (artificial people) by alchemical means: “They say that Rhases and Albertus had invented a way to get little men by Art. Paracelsus boasts that he had received this secret of secrets from God: affirming, that if the Sperm of a man do purrifie in a sealed Goard, to the highest putrifaction of Horse-dunge, forty dayes, or so long untill it begin to live and to move and be stirred, which is easie to be seen, after that it will be in some time like unto a man, yet pellucid and without a Body: Now if afterwards, it be daily and warily and prudently nourished and fed with the secret of mans bloud, and conserved for forty weeks in a perpetual and equal heat of Horse-dung; it will thence become a true Infant, having members as those which are begot on women; but it will be farre lesse; Then it is diligently brought up, untill it grow a Tripling, and begin to understand and be wise.”(p. 490) 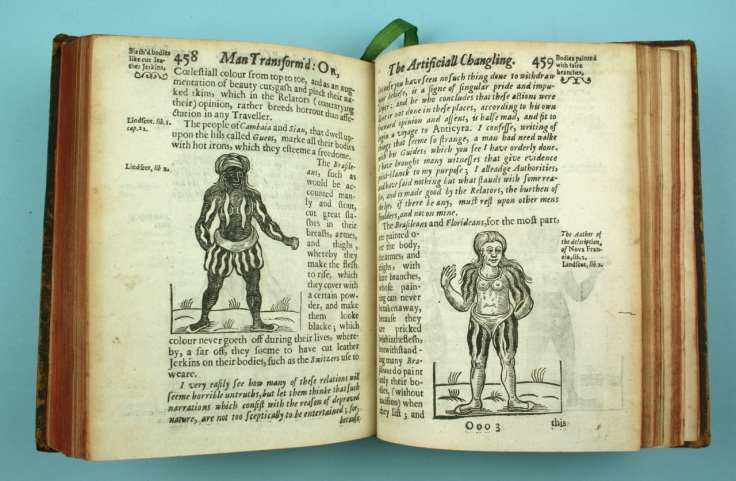