Like, Francis Bacon’s Sylva Sylvarun, Grew’s Catalogue of the Royal society  and Brown’s Pseudo Epidemica, Leigh’ Natural History, is a conglomeration  of current scientific knowledge, misinterpretation, ridiculous lore and my favorite, outlandish impossible tales. Leigh’s book has one more thing going for it is the extremely crisp and clear engravings. Unlike the others it also has as subject index, which is fascinating reading. A nice example of the index reads

By the way, a Busonite, is also known as a ‘Toad Stone’ fossilized teeth from the “Sea-wolf”

The natural history of Lancashire, Cheshire, and the peak, in Derbyshire: with an account of the British, Phœnician, Armenian, Gr. and Rom. antiquities in those parts. By Charles Leigh, Doctor of Physick.

Overall, this is a really lovely copy. it is bound in contemporary calf rebacked.

Leigh, remembered primarily as a naturalist and a Fellow of the Royal Society, was a physician by profession. He published several works, “the most important of which is a ‘Natural History of Lancashire, Cheshire, and the Peak of Derbyshire’.” (Thomas)
The text of this volume is most intriguing; it is, all in one, a catalogue of antiquities, an archaeological survey, and a freak show. One of the author’s many goals is to demonstrate and prove, by producing artifacts and animals from far flung corners of the world, that a huge flood covered the whole earth and dislodged hippos from the home lands, planting them in the mud of Lancashire. The plates include ‘The devil’s arse,’ a woman with horns, Greek carved tablets, fossils, birds, skulls, and crustaceans.
Wing L975.

The Dictionary of National Biography, 1885-1900, Volume 32 tells us,  LEIGH, CHARLES (1662-1701 ?), physician and naturalist, son of William Leigh of Singleton-in-the-Fylde, Lancashire, and great-grandson of William Leigh [q.v.], B.D., rector of Standish, was born at Singleton Grange in 1662. On 7 July 1679 he became a commoner of Brasenose College, Oxford, where he graduated B.A. on 24 May 1683. Wood records that he left Oxford in debt and went to Cambridge, to Jesus College, as is believed. He graduated M.A. and M.D. (1689) at Cambridge. He was on 13 May 1685 elected F.R.S. When Wood wrote his ‘Athenæ Oxonienses,’ Leigh was practising in London; but he lived at Manchester at a later date, and had an extensive practice throughout Lancashire. 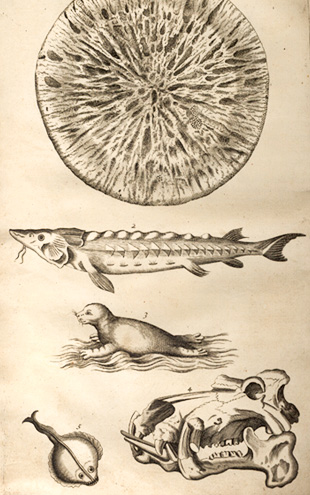 Some of his papers read before the Royal Society are printed in the ‘Philosophical Transactions,’ and he published the following separate works: 1. ‘Phthisologia Lancastriensis, cui accessit Tentamen Philosophicum de Mineralibus Aquis in eodem comitatu observatis,’ 1694, 8vo; reprinted at Geneva, 1736. 2. ‘Exercitationes quinque, de Aquis Mineralibus; Thermis Calidis; Morbis Acutis; Morbis Intermittentib.; Hydrope,’ 1697, 8vo. 3. ‘The Natural History of Lancashire, Cheshire, and the Peak in Derbyshire; with an account of the British, Phoenic, Armenian, Gr. and Rom. Antiquities found in those parts,’ Oxford, 1700, fol. This contains a good portrait after Faithorne as frontispiece. He also wrote three pamphlets in 1698 in answer to R. Bolton on the ‘Heat of the Blood,’ and one in reply to John Colebatch on curing the bite of a viper. His writings are of little value, and there is reason for the remark of Dr. T. D. Whitaker that ‘his vanity and petulance’ were ‘at least equal to his want of literature.’ His ‘Natural History’ is little more than a translation of his earlier Latin treatises.

He married Dorothy, daughter of Edward Shuttleworth of Larbrick, Lancashire, with whom he received a moiety of the manor of Larbrick, afterwards surrendered in payment of a debt owing by Leigh to Serjeant Bretland. He left no issue. His widow died before 1717.

He is said to have died in 1701, but there is some doubt on this point, as Hearne, writing on 30 Oct. 1705 (MS. Diary, iv. 222), says : ‘I am told Dr. Leigh, who writ the “Natural History of Lancashire,” has divers things fit for the press, but that he will not let them see the light because his History has not taken well.’