This is a woodcut of a Solar Eclipse in 1654  by Thomas Hewit,  astrologer in England.  It shows the moon (the black circles with a face) before, during and after covering most of the disk of the Sun .  From Annus ab incarnatione Domini Hewit 1654 an almanack for the year of our Lord, 1654 … calculated for the meridian of the city of Coventry / by Thomas Hewit. Wing (2nd ed.), A1820

Today I have a very interesting book by the Jesuit Poet Jakob Balde which has as its subject This very eclipse.

1633, he was appointed professor of eloquence in the university. Called to Munich a few years later to educate the sons of Duke Albert, he soon after received the office of court preacher to the elector Maximilian. Owing to failing health he was, in 1654, sent to Neuburg on the Danube, where he became the intimate friend and adviser of the Count Palatine Philipp Wilhelm. Here he died. The poetical works of Balde are marked by a brilliant imagination, noble thoughts, wit and humour, strength and tenderness of feeling, great learning, love of nature, and knowledge of the human heart. His mastery of classical Latin was such that he wielded it with astonishing power and originality, and he used the ancient metres and poetical forms with consummate ease and skill. His poetical themes are the world and religion, friendship and fatherland, art and letters. His patriotic accents, says Herder, have made him a German poet for all time. He witnessed the horrors of the Thirty Years War, and the devastation and disruption of his country, and while lamenting the fate of Germany, sought the re-awaken in the hearts of the people the old national spirit.

Balde was above all a lyric poet, many of his odes to the Virgin Mother of God being of surpassing beauty, but he 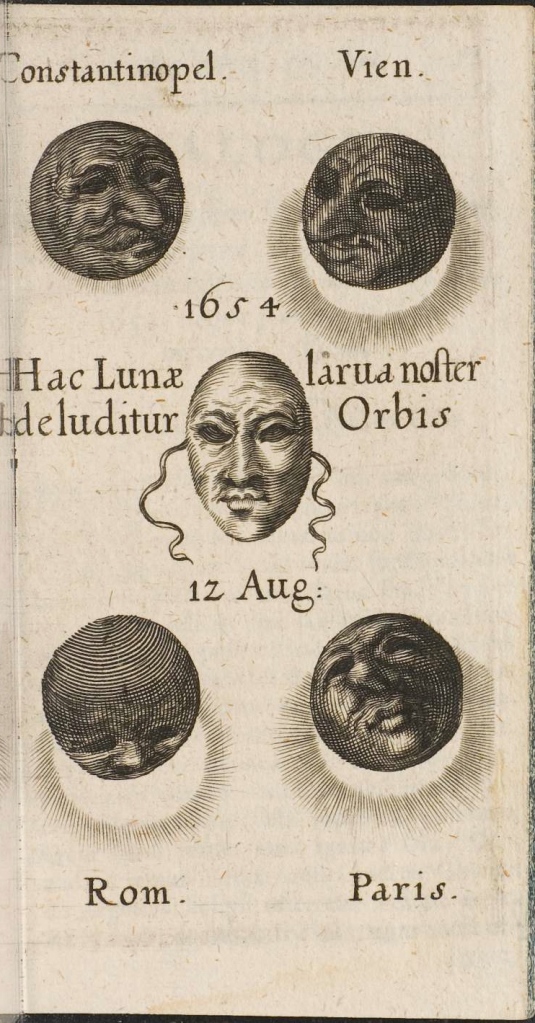 vehicle of poetical expression. Balde’s poetry is not faultless; he occasionally offends against good taste, burdens his verses with mythological lore, and odes not always keep his luxuriant imagination under control. The only complete edition of his works was published in eight volumes at Munich in 1729.

To me the ‘philosopher’ illustrated on the title of  Balde’s satyre certainly shares some iconic signifiers with other near contemporary images of Galileo.  Of course Galileo was dead for a dozen years at the time of this comet, but it could also be Copernicus, in eather case it clearly represents an attitude id Jesuits toward the ‘New(ish) Astronomy’

This book as you can see has three wonderful illustrations depicting the appearance of the eclipse in different European centers.

While researching this intriguing image I came across a modern rendition, or diagram of the shadow of this eclipse. The solar eclipse of 12 August 1654 was eagerly anticipated by astronomers across the globe who hoped to observe it. Erhard Weigel of Jena, Germany produced the earliest known solar eclipse map the day before the eclipse. Outside of the scientific community, however, public anticipation was, in many quarters, tinged with apprehension. The astronomer Pierre Gassendi produced an anonymous pamphlet attempting to reassure the people of Paris that the predicted eclipse would not lead to a disaster. He was not entirely successful as many of the inhabitants of Paris hid in their cellars on the day the eclipse was predicted. Although the eclipse did not result in the end of the world as Helisaeus Roeslin of Alsace had predicted back in 1578, it did have an influence on the course of human events, most notably at the Battle of Szklów where surprise at the eclipse caused disarray among the Russians and resulted in a Polish victory.  Also in 1665 John Wallis, also  published a little book about this eclipse” Eclipsis solaris Oxonii :visæ anno ærae christianæ 1654, 2b die mensis Augusti, stilo veteri, observatio” Oxonii : Typis L. Lichfield academiæ typographi, impensis T. Robinson 1655. Even more exciting is that Hevelius mentions this in his “Johannis Hevelii Epistola de utriusq[ue] luminaris defectu anni 1654. :ad … Petrum Nucerium ” printed by Gedani : Sumtibus autoris, typis Andreæ Julii Molleri., Poland; Gdansk.1654.   Antoine Agarrat, also published in Paris Impr. de l. Langlois 1654 “Eclipses du soleil : observées aux annees 1652 & 1654, par le commandment de son altesse royale” Erhard Weigel wrote a Disertation on the August 1654 Eclpse “Secundae partis Geoscopiae selenitarum disputatio secunda de eclipsibus, tum in genere, tum in specie de magna solis eclipsi, d. 2. Aug. proxime futura, quam … praeside . Jenæ 1654.

Small Octavo, .  First  edition  [3] leaves of plates;232, [2] p.,  This copy is bound in a contemporary binding made of a reused vellum manuscript.

“In his poem De eclipsi solari (1662), the Jesuit satirist Jacob Balde described how a poet and a mathematician explained the eclipse of the sun of 1654 and how their assessments of this solar phenomenon differed from each other. Rationality and superstition were contrasted in these views and the discussants disputed whether the eclipse was the result of natural causes or whether it should be construed as evidence of divine reactions against communal sin. In the tradition of apocalyptic satires, the dialogue shows how men’s civility degenerated in a state of emergency and how the different branches of learning (astrology, poetry, theology) had their own imaginary explanations of the eclipse. One of the conclusions of the dialogue was that in fact the sun did not go through any change during the eclipse, whereas men’s minds were darkened. Similar arguments were used in the Reformation polemic over the Catholic doctrine.”(Sari Kivistö, from her forthcoming Conflicting Disciplines in Early Modern Satire)

The first part of the book is a dialogue, written in prose, between the mathematician Alfons Persius Pernumias and the poet Didacus Cyrisatus on the solar eclipse of 1654, which figures as a template for a discussion of European politics. This is followed by poems and a glossary of unusual Latin words, [?] and some words made-up in a Rabelaisian manner.