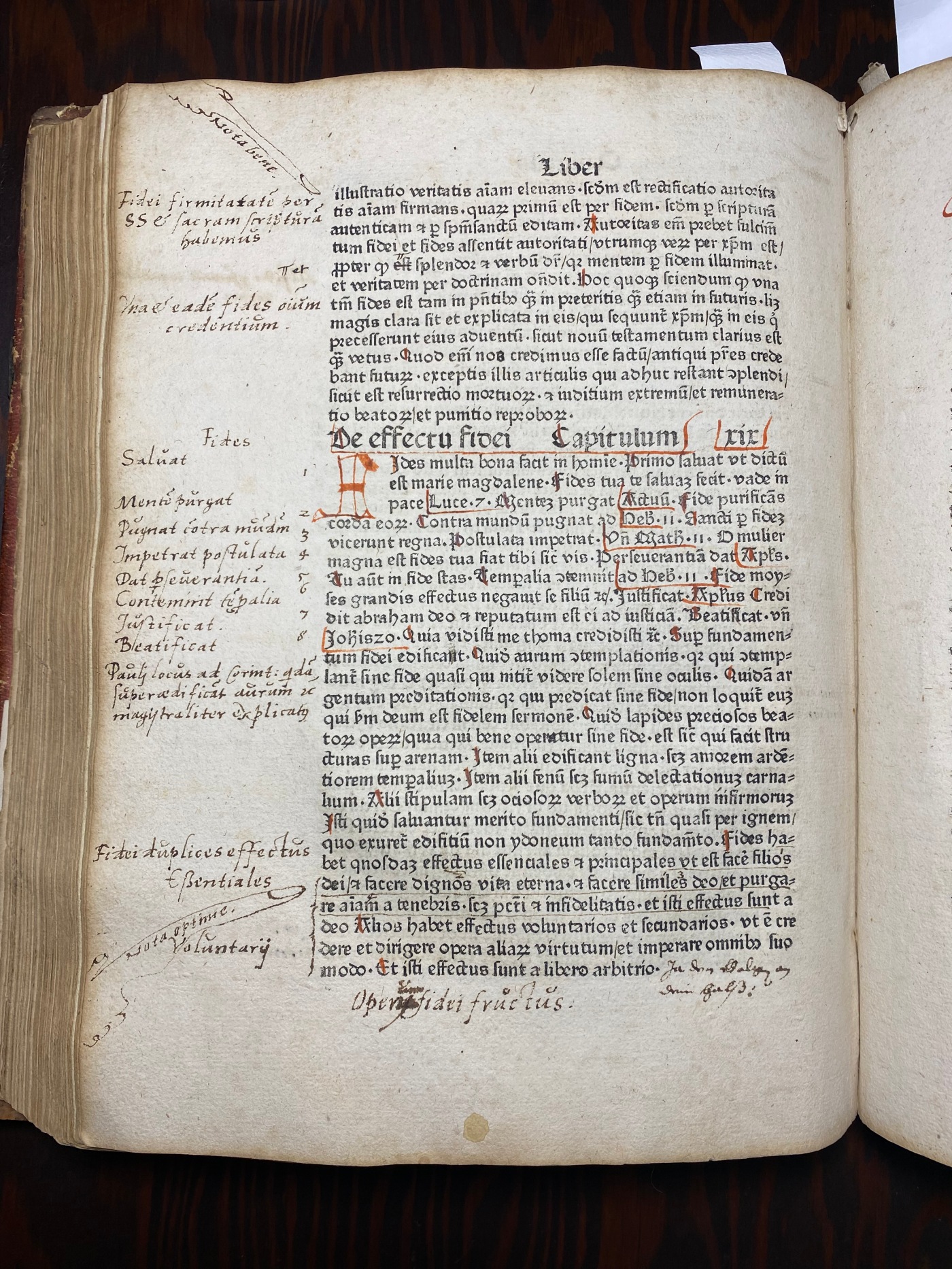 [CIBN dates this as not after 1480 from the date of rubrication in Württemberg LB copy (cf. Amelung, Frühdruck)] furthermore a copy in the Klemm collection, at Leipzig has a rubricator’s date: “1481”    Imprint from incipit on leaf [2r] which reads: Theoloyce veritatis co[m]pendium alphabetico ordine registratum ac in regali opido vlma per Joa[n]nem zainer impressum feliciter incipit.                            Price:  $24,000

¶ There is an old catalogue  slip\description on front paste-down quoting a Katalogle description from   “T. (sic. Jacques) Rosenthal “  Buch-und Kunstantiquariat  katalogle 18: 1898 number 244;  [which dates this edition at 1468]    ¶ Most likely  typed by WR Siegart who received this book  from Dr. Grimm.  More interesting, on the front pastedown there is an ownership note by Jacob Hartlieb active 1493-1513.  There is a note on the  free endpaper which a is a reference, noting a page number in a book by Jakob Wimpheling of Schlestadt, (1450-1528.) licentiate of theology, on the lives of the bishops of Strasbourg, [specifically] in the life of Henry of Germany, the one-time(?) (looks like olim) 65th (?) bishop, writes on folio 42: Then follows Wimpheling’s passage. By the way, this Henry has got to be: Henri de Geroldseck active (1263–1273). Wimpheling notes that he was bishop in 1265.

Therefor it is not unreasonable to think that both Hartlieb and Wimpheling were friends/coleagues.

Johann Zainer (d. ca. 1523) was the second printer based in Ulm. Among others, he is remembered for printing the first German translation of Boccaccio’s “De claris mulieribus” in 1473. Only 1.4% of ISTC recorded editions were printed in Ulm.

The “Compendium theologicae” has a long history of being misattributed to an array of authors such as Albert Magnus, Thomas Aquinas, Thomas Dorinberg, and Bonaventure, among others, but is now more certainly considered to be by Hugo Ripelin  The Compendium most probably, if not certainly, was written by Hugh of Stasburg. Other works attributed to him are: “Commentarium in IV libros sententiarum”; “Quodlibeta, quaestiones, disputationes et variae in divinos libros explanationes”. , a Dominican theologian from Strasbourg.  Thomas Dorinberg, who complied the edition of 1473 with an index, was for a long time looked upon as the author; others attributed it to Thomas Aquinas.

Among other theologians to whom it was ascribed are Hugh of Saint Cher, Alexander of Hales, Aureolus, the Oxford Dominican Thomas of Sutton, Peter of Tarantasia and others.  Apart from the works of Thomas Aquinas, the “Compendium” was the most widely read work of Dominican theology, being used as a textbook for close to 400 years.  The Compendium is indeed a monumental achievement. It is notable for its superb organization, its concise exposition of an amplitude of topics and of supporting rationales.  It is also, for the most part, written in clear Latin, making it more easily accessible to clergy who may not have been as fluent in Latin as were the monks.

The Compendium is divided into seven books, each having its own set of  themes, as

indicated by these books’ titles:

(3) The Corrupting Effect of Sin;

(5) Sanctifying-Effect of Graces;  With about 20 pages of annotations

(6 The Efficacy of Sacraments;

Each of the books is sub-divided into a series of specific issues the development of which is meant to give guidance to preachers and to students of theology. The fact that these issues are so central to Christian belief helps to explain why there survive in 59 printed editions.