Folio (280 x 200mm.)  π6 a8 b-y6 z8 [et]6 [con]8 (the last leaf supplied from another copy, printed on recto only),  The second leaf (π2) has a beautiful a green painted initial A [Amor] on a gold ground with pink and blue edges, extending into the margins with green-stemmed pink and gold flowers on opposite side. The first leaf of the text proper (a1) Has a  large blue painted initial A on a gold ground with pink and green edges, large pink and purple flowers, strawberries thistles and  a Tromp l’oeil of a Dead fly,( quite charming)   fill uppermargin; 3-line initials in alternating red and blue, rubricated throughout. This is the first dated edition.

It is bound in Contemporary deerskin over wooden boards, covers panelled and tooled in

blind with repeated small rosette tool, remains of paper labels on spine (lacking metal furniture and clasps, some wear and small areas of loss). This copy has some

contemporary manuscript notes, including a two-line note on f. b2recto,  and on f.a2verso is a marginal drawing  of the scala naturae with the four gradus marked. 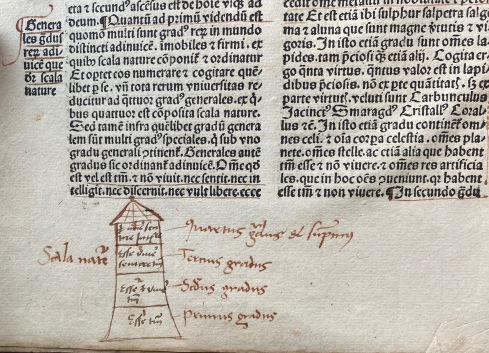 Provenance: Contemporary inscription of Johannes Pengl (Penngl) from Weißenburg in Bavaria, who was active in Eichstätt & Vienna, with a note of cost of binding on final paste down. Later notes and shelf-mark on front paste-down and loose sheet.

This text marks the dawn of a knowledge based on Scripture and REASON.

The Catholic Encyclopedia sees this as “It represents a phase of decadent Scholasticism, and is a defense of a point of view which is subversive of the fundamental principle of the Scholastic method. The Schoolmen of the thirteenth century, while holding that there can be no contradiction between theology and philosophy, maintain that the two sciences are distinct. Raymond breaks down the distinction by teaching a kind of theosophy, the doctrine, namely that, as man is a connecting link between the natural and the supernatural, it is possible by a study of human nature to arrive at a knowledge even of the most profound mysteries of Faith. The tendency of his thought is similar to that of the rationalistic theosophy of Raymond Lully….Moreover, in Spain scholastics, in combating Islam, borrowed the weapons of their erudite antagonists. Close internal resemblance indicates that Raimund de Sabunde was preceded in method and object by Raymund Lully.” CE 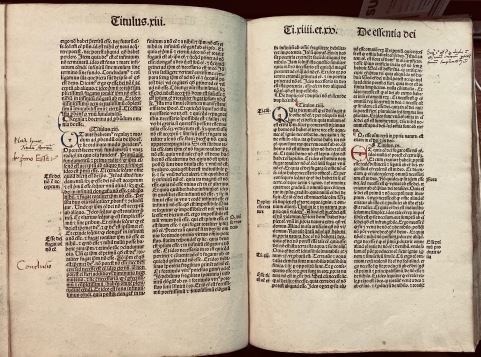 What is new and epoch-making is not the material but the method; not of circumscribing religion within the limits of reason, but, by logical collation, of elevating the same upon the basis of natural truth to a science accessible and convincing to all.  He recognizes two sources of  (1)knowledge, the book of nature and (2) the Bible.  The first is universal and direct, the other serves partly to instruct man the better to understand nature, and partly to reveal new truths, not accessible to the natural understanding, but once revealed by

God made apprehensible by natural reason.   The book of nature, the contents of which are manifested through sense experience and self-consciousness, can no more be falsified than the Bible and may serve as an exhaustive source of knowledge; but through the fall of man it was rendered obscure, so that it became incapable of guiding to the real wisdom of salvation. However, the Bible as well as illumination from above, not in conflict with nature, enables one to reach the correct explanation and application of natural things and self. Hence, his book of nature as a human supplement to the divine Word is to be the basic knowledge of man, because it subtends the doctrines of Scripture with the immovable foundations of self-knowledge, and therefore plants the revealed truths upon the rational ground of universal human perception, internal and external.

The first part presents analytically the facts of nature in ascending scale to man,the climax; the second, the harmonization of these with Christian doctrine and their fulfillment in the same. Nature in its. four stages of mere being, mere life, sensible consciousness, and self-consciousness, is crowned by man, who is not only the microcosm but the image of God. Nature points toward a supernatural creator possessing in himself in perfection all properties of the things created out of nothing (the cornerstone of natural theology ever after). Foremost is the ontological argument of Ansehn, followed by the physico-theological, psychological, and moral. He demonstrates the Trinity by analogy from rational grounds, and finally ascribes to man in view of his conscious elevation over things a spontaneous gratitude to God. Love is transformed into the object of its affection; and love to God brings man, and with him the universe estranged by sin, into harmony and unity with him. In this he betrays his mystical antecedents. Proceeding in the second part from this general postulation to its results for positive Christianity, he finds justified by reason all the historic facts of revealed religion, such as the person and works of Christ, as well as the infallibility of the Church and the Scriptures; and the necessity by rational proof of all the sacraments and practices of the Church and of the pope. It should be added that Raimund’s analysis of nature and self-knowledge is not thoroughgoing and his application is far from consistent. He does not transplant himself to the standpoint of the unbeliever, but rather executes an apology on the part of a consciousness already Christian, thus assuming conclusions in advance that should grow only out of his premises.   Yet his is a long step from the barren speculation of scholasticism, and marks the dawn of a knowledge based on Scripture and reason.

In its day, and for a long time later, it was a celebrated text. The title translates ‘Natural Theology or the book of [living] creatures, in particular about man and his nature inso far as he is man, and about those things necessary for him to know both himself and God, and about every duty by which man is held and obligated both in respect of God and his neighbour.’ The scope is therefore pretty wide. The main point of Sebond’s work is that that faith can be taught, attained, understood by natural reason and not simply on the basis of blind faith and literal adherence to Scripture, although this last is given full weight as is the teaching of ‘sacrosancta romana ecclesia who is the mother of all faithful christians, mistress of grace and faith and rule of truth…’ (preface on a2ra). The work is divided into 330 ‘tituli’ or chapters beginning with the origins of natural theology and ending with the last judgement, the subjects treated at greatest length being ‘God’ and ‘Man’. 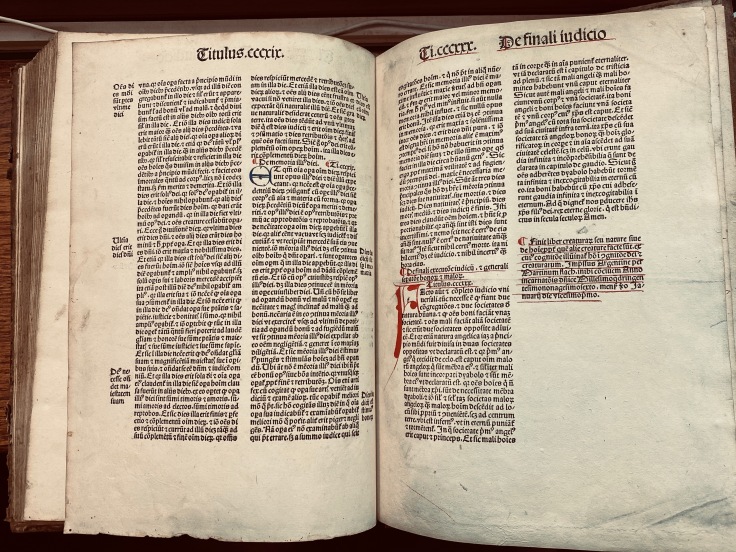 Theologia Naturalis, which circulated widely in manuscript and is known particularly  in a manuscript in Toulouse (747) corrected after the author’s own copy, was first published in what is called the ‘third family’ in Deventer in 1484-85 (possibly through the offices of the Brothers of the Common Life; the Bodleian copy is from their house at Doesburg, Holland), and then Lyon ca. 1488 from the printer Balsarin. This Flach printing circulated widely (a copy was at Winchcomb abbey in Gloucestershire within a few years (now in Glasgow) and early in the 16the century Archbishop Warham (Abp. 1503-32 ) gave a copy to All Souls College, Oxford) and is the first dated edition. There were a number of later editions (including another Flach edition of 1501) right up into the 17th century. Indeed the well-known 17th-century philosopher Kenelm Digby ( 1603-1664) had a copy of this edition (now at Durham University Library at Bamburgh Castle). Part of the Theologia (Dialogos de la naturaleza delhombre)  was translated into Spanish and printed in Madrid in 1610 and 1616, and a resumé by the Carthusian Petrus Dorlandus (Viola anime per modum dyalogi) was published in Cologne in 1499 (ISTC id00360000 ) and in Toulouse in 1500 I(ISTC id003610000). A Spanish version of this, Violeta del anima, was published in Valladolid in 1549. The Theologia because of the importance it accorded human reason did not escape the notice of the holy Office and was placed on the Index in the middle of the 16th century. Montaigne indeed discovered this during his visit to Rome.