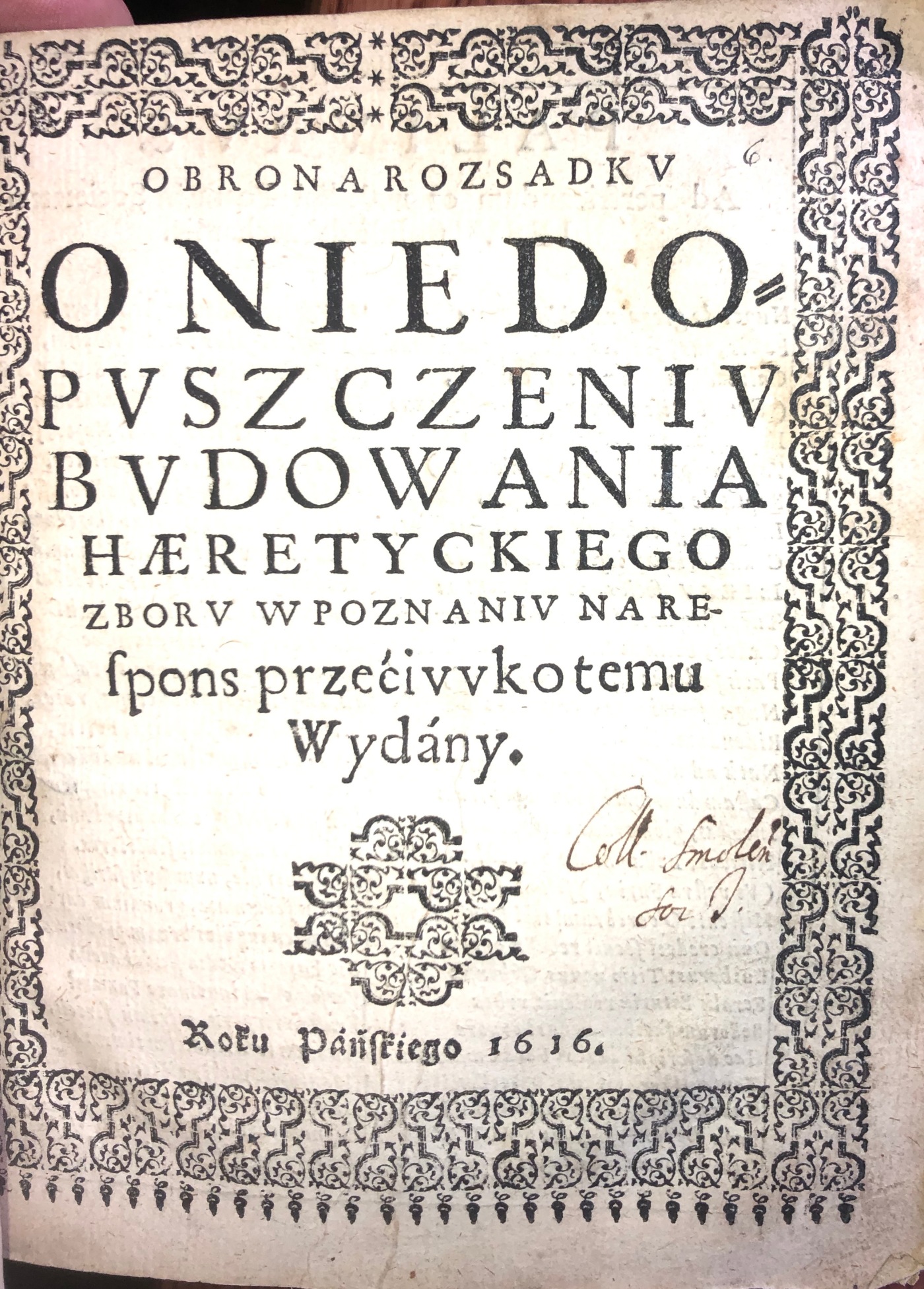 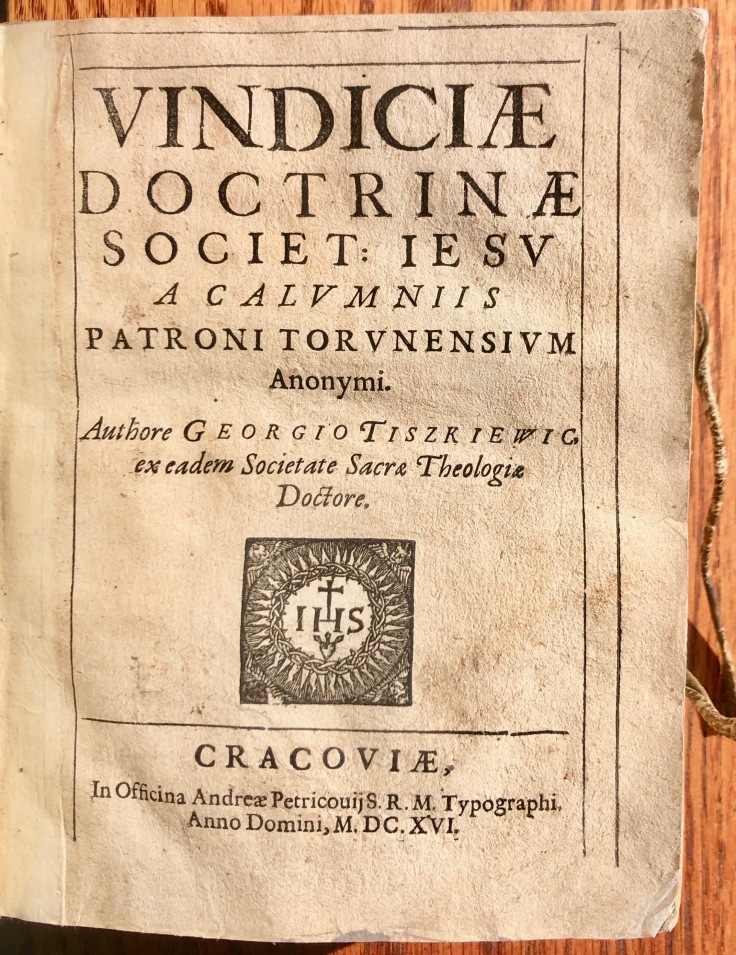 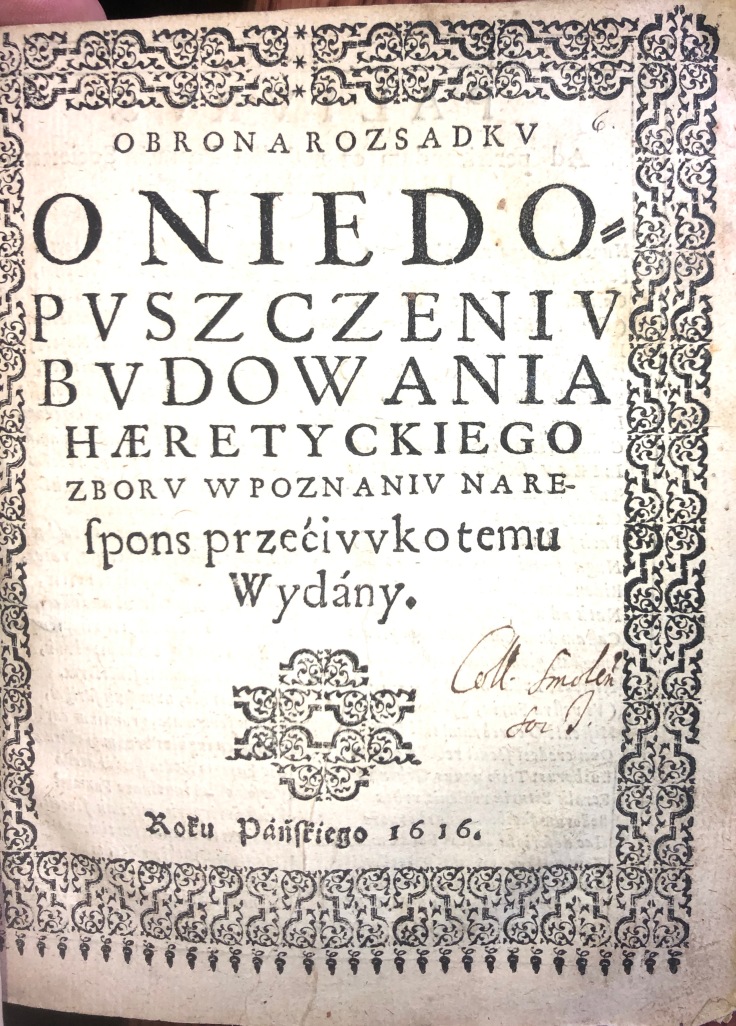 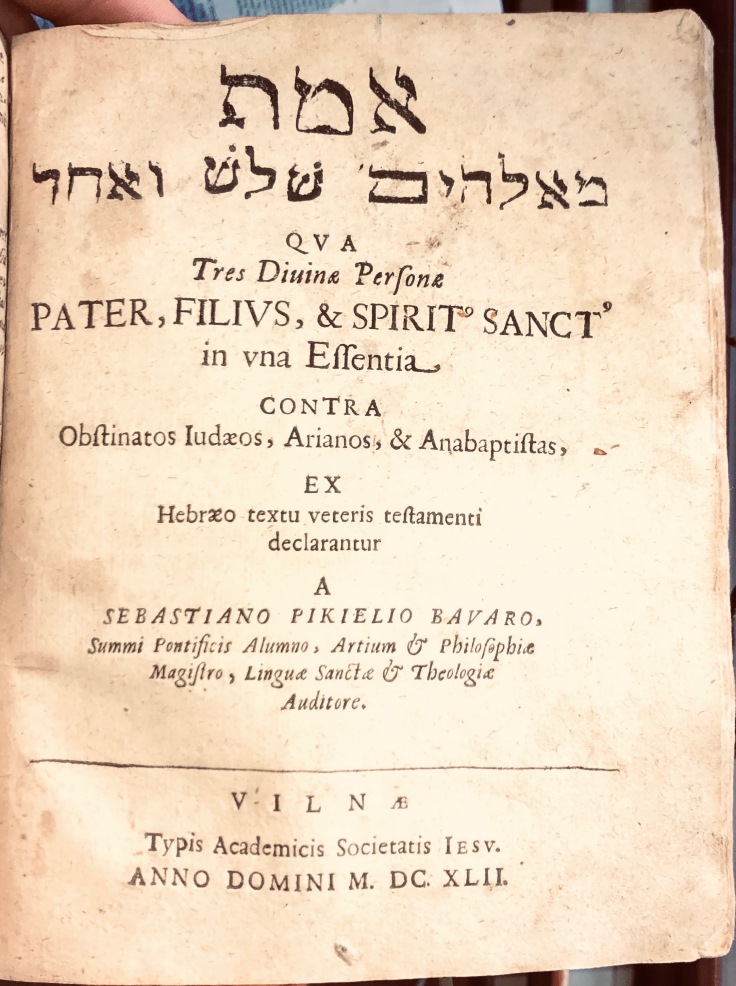 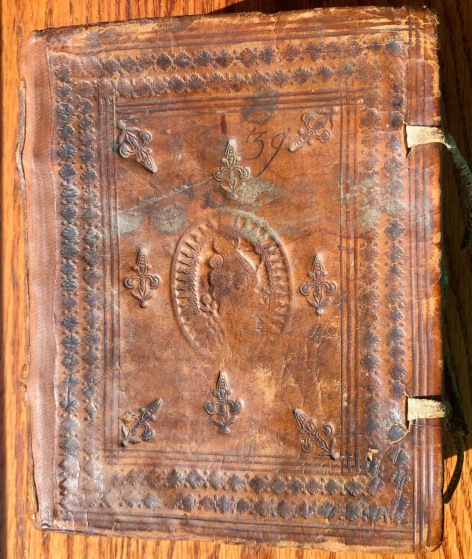 This sammelband is bound in the original Eastern European binding of blind tooled calf with ties. The binding has been strengthened as the sewing supports were virtually non-existent. The works are all in very good condition, a minor tear to D3 in the sixth work, and the
work by Brezeski, the third work, lacks two leaves of preliminaries.    This sammelband contains eleven Catholic controversial works of mainly Polish and Lithuanian origin the majority of which are by Jesuit authors. Most of the works could not be located in any institution world-wide.
1. Tyszkiewicz, George (1571-1625)
The author of the first work was a long-time professor of philosophy and theology at Posen and at Lubin in addition to serving as rector of many of the different colleges. This work, a response to the second work of Patronus Torunensium that attacked the doctrine of the Jesuits, is not recorded by OCLC and no copies could be located world-wide.
Krakow: in Officina Andreae Petricouii S.R.M. Typographi, 1616. 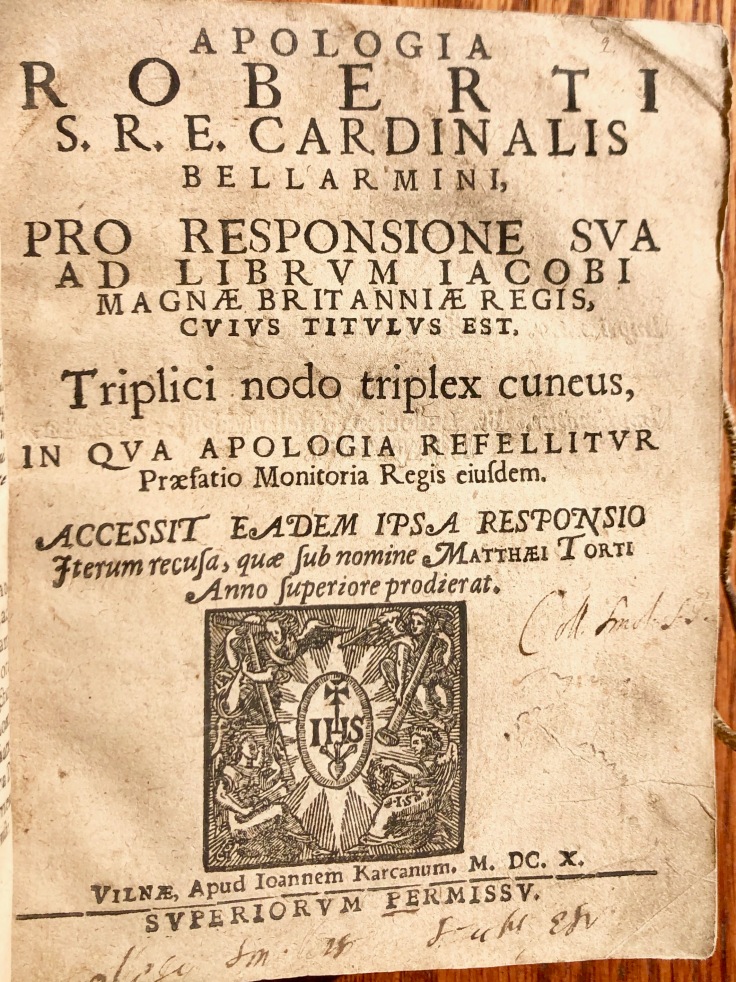 Bellarmino, who taught the humanities for many years at Florence, is well known for his controversial literature of which, this work is an example. Bellarmino wrote this work under the pseudoname “Matthaeus Torti” in response to England’s king James I “Triplici nodo triplex cuneus,” an apology for the oath of allegiance and consequently an attack on papal authority which James associated with he antichrist. The “Triplici” first appeared in 1607 and Bellarmino’s response, in 1609. This edition is one of five editions that appeared in 1610.
3. Brzeski, Albertum Stanislaum.
Brzeski taught philosophy and theology in the Jesuit school at Alma and this disputation took place on June 21, 1626. Interestingly, the author thanks George Tyszkiewicz, the author of the first work in this volume, as the overseer of the school in which Brzeski teaches.
This author is not in Sommervogel and no books by him appear in OCLC.
4. Kaczorowski, Kacorovius (1578-1628)
Kaczorowski taught grammar, rhetoric and math. There is an interesting note in De Backer/ Sommervogel questioning the authorship of this work and offering the possibility that it was written under pseudonym. The “Monita” is very much in the vein of other sixteenth and seventeenth century controversial works. Kaczorowski has, as he states on the title page, collected information from the books, sayings and deeds of the Calvinists to produce this attack on their doctrine.
One copy only  OCLC. First edition
Crachow: Typis Francisci Cesarii, 1616

5. Bembus, Matthieu (1567-1645)
Bembus entered the Jesuit order in 1587 and soon after taught taught philosophy and theology. He was named rector of Posen and then superior of the house at Crachow before his death in 1645. Joseph Lukaszewicz, another Polish Jesuit and Polish historian, held Bembus in high regard and penned a elegy upon his death in 1645: “in sacred eloquence, he occupies the first rung after father P. Skarga; his sermons are not only a monument of eloquence and style, but a mine of documents for the history of Poland.”
TWO copies  recorded by OCLC. First edition.
[no imprint info, but dated 1615] 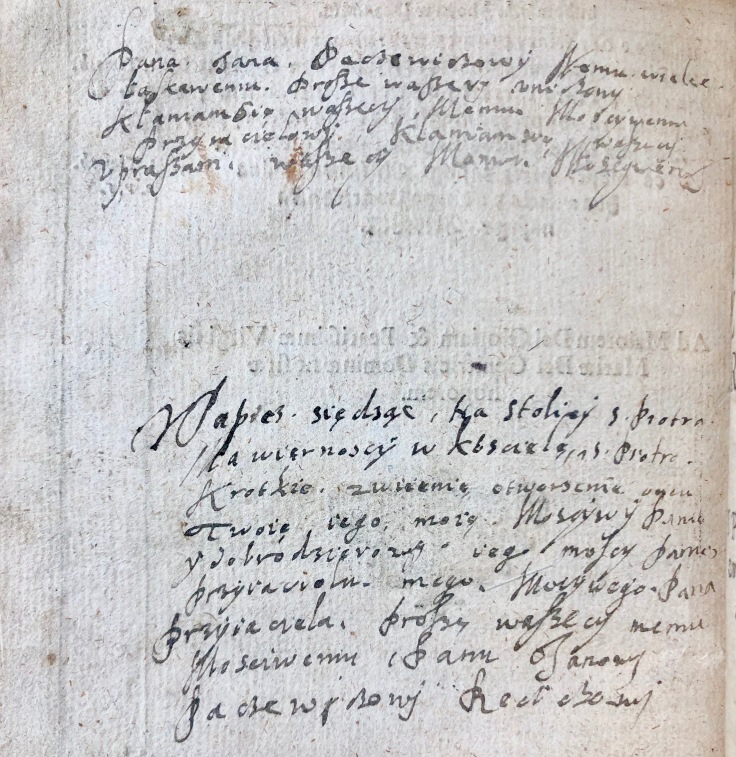 6 and 7.  Not much is known about these two Polish language works. Neither work is recorded by OCLC. The printer, Roku Panskiego, produced mainly catholic works and these two works join the five works recorded by OCLC (all appearing before 1600) as having been issued from his press. The first work is dated 1616 and the second 1624.

8. Cnoglerus, Quirinus
The present work, the “Symbola Tria” was edited by Cnoglerus and was printed with his explanatory notes by a press operated by the Jesuit order in Vilnius, Lithuania. The work consists of parallel columns of extracts from various Catholic, Calvinist and Lutheran authors and Cnoglerus’s commentary on them. Copies are located at the National Library of France, In Sweden at the Kungl. Biblioteket in Stockholm, in addition to four loacations in the United Kingdom including Oxford.
Vilnius: Ex officina typographica Societ. IESU, anno, MeDIatorIs ChrIstI [or 1592 or 1602, but probably the latter]

9.and 10 Cnoglerus, Quirinus
Another work by Cnoglero follows in this sammelband and like the earlier work, it is another controversial work directed this time against the Calvinists in Vilnius in Lithuania and like the previous work, it was printed by the Jesuits.
No copies could be located world-wide.
Vilnius, typis acad. societ. IESU. 1603

11. Pikel, Sebastien
Very little information is available on this author. Even De Backer / Sommervogel mentions that their records contain little or no information on this author. Pikel wrote one other work that made it to the press, another controversial work printed in 1642 and like the preceding works, executed by the Jesuit press in Vilnius in Lithuania.
No copies of this work could be located world-wide. First edition.
Vilnius: Typis Academicis Societatis Iesu, 1642. 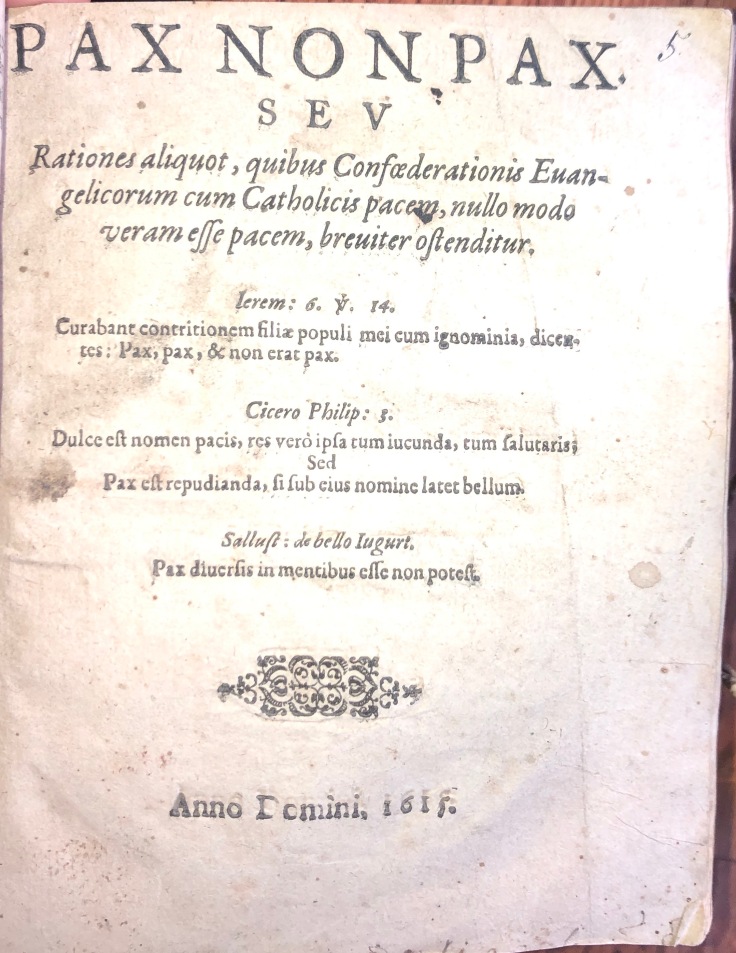 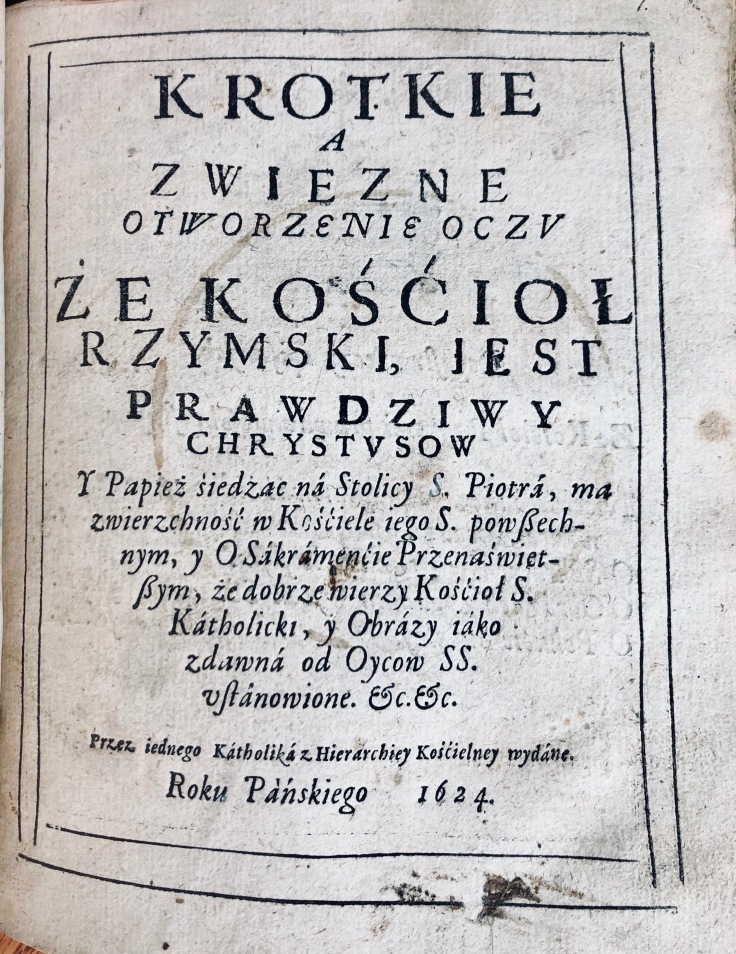 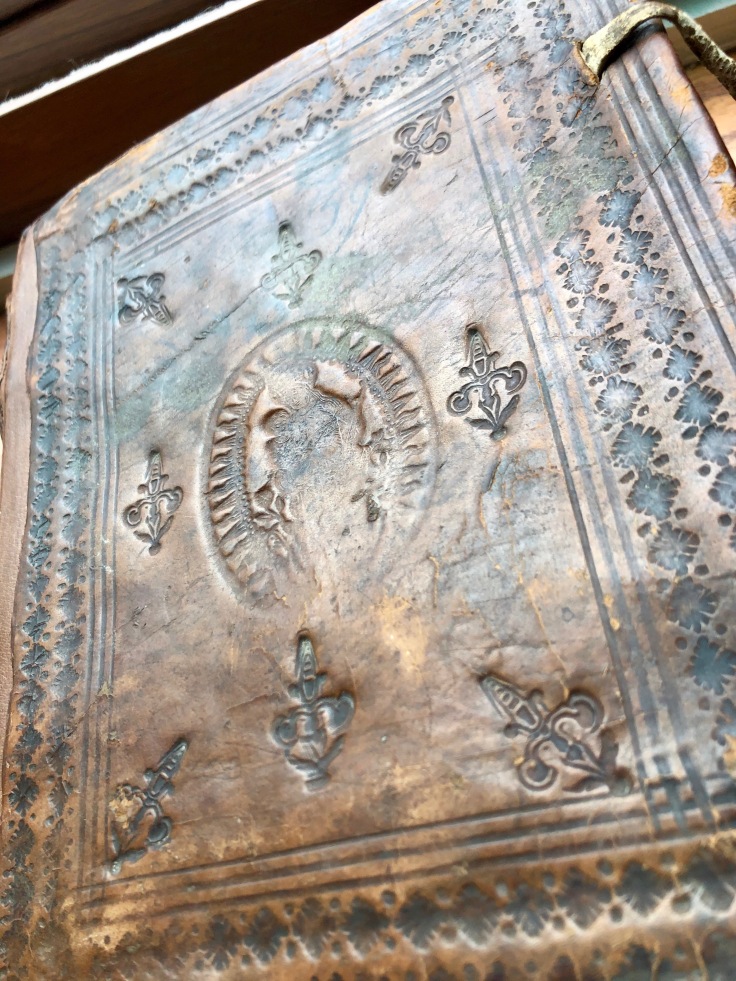