The Life and Errors of John Dunton 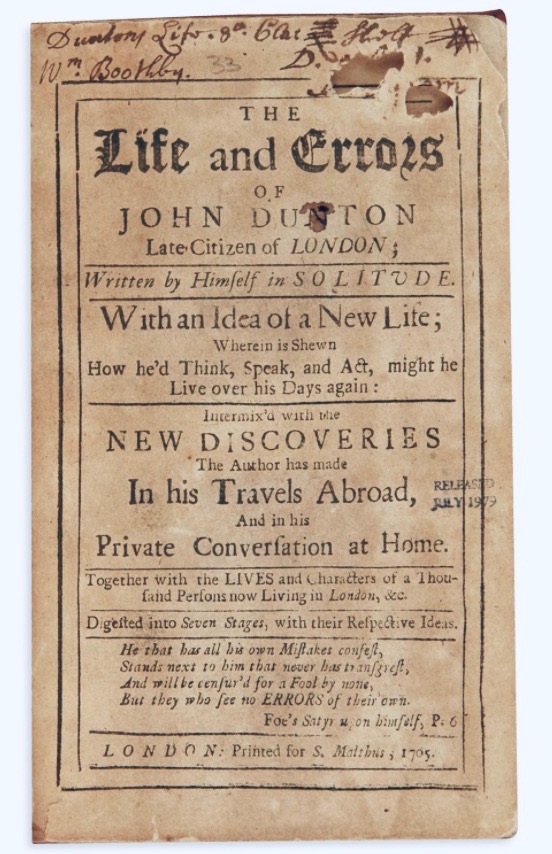 The life and errors of John Dunton : late citizen of London ; written by himself in solitude. With an idea of a new life ; wherein is shewn how he’d think, speak, and act, might he live over his days again: Intermix’d with the New Discoveries The Author has made In his Travels Abroad, And in his Private Conversation at Home. Together with the Lives and Characters of a Thousand Persons now Living in London, &c. Digested into Seven Stages, with their Respective Ideas.

“Eighty-four pages are occupied with the account of his visit to New England, his opening a bookstore in Boston; intercourse with the Mathers, John Cotton, Eliot, Hubbard, Indian sachems, and several ladies of Boston, of some of whom he relates very curious particulars”–Sabin 21344.

Dunton, who was among other things a bookseller (at the age of fifteen he was apprenticed to Thomas Parkhurst, bookseller, at the sign of the Bible and Three Crowns, Cheapside, London.  Dunton ran away at once,  but was soon brought back and began to love books)  is best known today as a tireless self-promoter whose first person  and experimental work contributed to the development of the novel and autobiography in the eighteenth century. He became a bookseller at the sign of the Raven, near the Royal Exchange, and married Elizabeth Annesley, whose sister married Samuel Wesley. His wife managed his business, so that he was left free in a great measure to follow his own eccentric devices.  he visited New England, where he stayed eight months selling books and observing with interest the new country and its inhabitants. He sailed from Gravesend in October 1685, and reached Boston after a four months’ voyage. He sold his books, and visited Cambridge. In Roxbury he saw the missionary John Eliot and learnt something of Native American customs. He stayed for a time at Salem and Wenham, and returned to England in the autumn of 1686.[2]

Dunton the showman is in plentiful evidence in this text, but he also presents another, more sober and serious-minded version of the self by following accounts of earlier stages of his life with their reformed versions. His coupling of religious-led self-examination with a commitment to literary novelty makes The Life a most unusual form of spiritual autobiography in its early stages.

Yet The Life is a composite text in an even more obvious sense than this. For around half-way through the text Dunton abandons his close focus on the self for hundreds of cursory character sketches of his contemporaries, and in doing so swaps spiritual considerations for indirect comments on his own social activities and commercial concerns.