Two manuscripts in one. 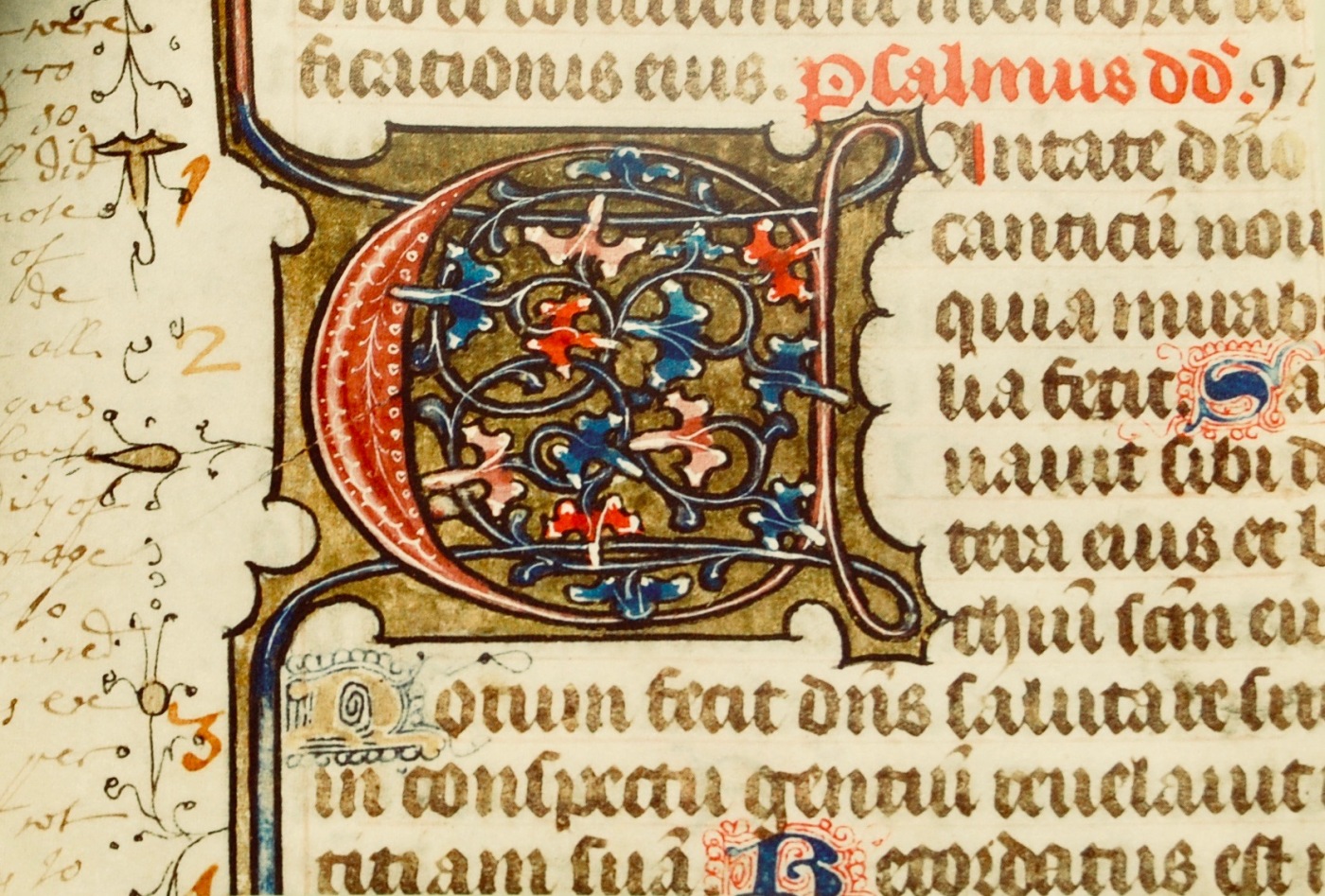 Surrounded on every page by an untitled 18thcentury English History manuscript.

A fifteenth-century manuscript Psalter with an early eighteenth-century English manuscript written in the margins throughout. The English work is mainly historical with long polemical passages concerning the Church of England. The primary aim of the author, who writes with a strong Catholic bias, is to demonstrate the illegitimacy of the reformed Church.

This psalter has a long English Provenance, stretching   back to the first quarter of the sixteenth-century, when this Psalter was owned by Alice Lupset, the mother of the English humanist Thomas Lupset (See below for a full discussion.)

The illuminations in this volume is exquisite, with all of the large initials done in gold and colors, with great skill. The nine large (7-line) gilt initials are all accompanied by full illuminated borders containing leaves, fruit, flowers, and vines in many shades of blue, red, green, yellow, and orange, with gilded highlights.  There are several other 4-line gilt initials in the text as well as many two and one –line initial letters.

This manuscripts dates to ca 1430. None of the popular saints canonized in the 1440’s and 1450’s appear either in the calendar or in the litany of saints. This manuscript contains almost exclusively the names of universally honored saints and festival occasions for the church as its “red letter days”

A sixteenth century inscription on the final leaf informing us that this book belonged to Alice Lupset (died 1543/4) wife of the goldsmith Thomas Lupset (died 1522/3) and mother of the English Humanist.

A second shorter inscriptionapparently in the same hand reads:

The feast days for English saints have been added to the calendar in an early sixteenth century hand (for example Cuthbert lear 2 recto) In accordance with Henry VIII’s Proclamation of 1534 the word “Papa” has been duly erased from all entriesin the calendar bearing the names of popes. The Addition of English names (which are written in an English cursive hand similar to the one usedfor the ownership inscriptions) and the erasure of the word “

Pope’ were quite possibly made by Alice Lupset herself.

A nineteenth-century inscription on the rear flyleaf records the names of the subsequent owners of this manuscript: “This book belonged to James Leatherbarrow in 1751. See the name on the first page_by whom it was given to his Brother John Leatherbarrow, who gave it to his Daughter Mrs. Ann Lithgow, who gave it to her edest Daughter Mrs.Gasney & from her it came into the possession of her sister Elizabeth Lithgow. February 14, 1841” In another inscription John Lithgow identifies hiself as the son of Anne Lithgow.

From John Lithgow the manuscript  passed to William Ormerod (1818-1860)

Surrounding, or rather filling the entire margins of the Psalter. The work is part religious, part history, and part chronicle. The, as of now, unidentified author’s purpose is to expose the usurpation of the Church and the throne of England by Protestants, beginning with Lord Somerset, and to demonstrate the legitimate authority of the Catholic Church by tracing the history of Christanity in England and chronicling – using lists excerpted from other sources- the succession of the kings and bishops of England. A number of printed and at least one manuscript work are quoted in full while others are digested or presented only in excerpt. The author of the manuscript then comments then comments upon these works, often at length, making the voices of our author and his sources difficult to parse.

The author cites a number of late seventeenth-century works, including Burnet’s “History of the Reformation”,and Jeremy Collier’s Historical Dictionary. A reference to John Harris’ Lexicon Technicumgives a terminus post quem of 1704