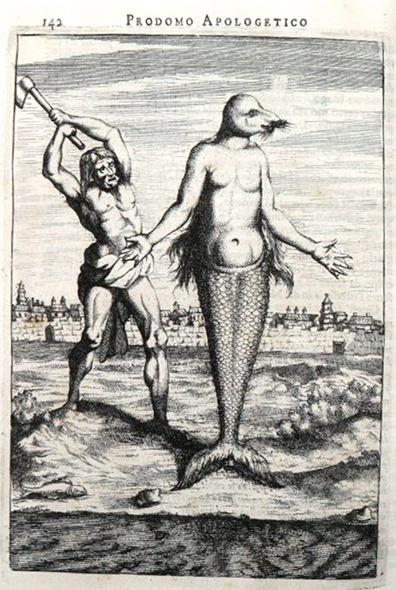 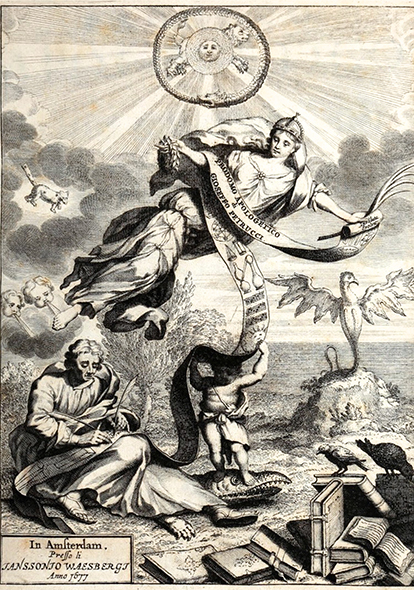 Bound in 19th cent. quarter calf with gold fillets and a red morocco label on the spine. A very good copy with occasional light spotting. Illustrated with 22 engraved and woodcut figures, mostly full-page, and 5 folding engraved plates: at pp. 48 (Vesuvius), 109 (an Egyptian funeral chamber with mummies), 111 (map of southern Africa), 128 (Archimedes’ fabled burning mirror), p. 195 (pyramids). The 4 full-page engravings illustrate the Rosa Sinensis. The frontispiece and some plates a bit shaved in the outer margin. Bound at the end there is an unrelated religious work printed at Venice in 1744.

“An Apologetic Forerunner to Kircherian Studies” is a remarkable defense of Athanasius Kircher’s writings, written at Kircher’s behest (and undoubtedly with his input) by Gioseffo Petruccio, one of his last disciples and devotees.

The book was prompted by the naturalist Francesco Redi’s critique of some of Kircher’s (many) pseudo-scientific writings. Redi had challenged Kircher’s claims about the curative qualities of so-called “snake stones”, small stones discovered in the heads of certain snakes in Asia. Kircher initiated the exchange by writing to Redi that he had used a snake stone to heal both a dog and a farmer, both of whom had been bitten by vipers. (The farmer had been bitten by accident; Kircher had exposed to the dog to the viper on purpose, as an experiment.) Redi responded to Kircher’s letter with one of his own, detailing his own experiments with the stones, performed in the presence of “many of the wisest and most reliable philosophers” in Pisa. Redi, unsurprisingly, found the stones to be useless.

Kircher wrote a response to Redi’s letter, criticizing Redi’s method and defending his own, but was dissuaded from publishing it by other scholars at the Collegio Romano who feared embarrassment, given the overwhelming scientific evidence in support of Redi’s conclusions. So Kircher turned instead to Petrucci to pen the “Prodromo” on his behalf.

But the “Prodromo” was to be more than a defense against Redi. As his works had multiplied and his fame grew, Kircher’s fantastic claims and methods met with an ever-increasing number of challenges from respected members of the international republic of letters. Moreover, enthusiasm for Kircher’s work had waned and his reputation suffered even at Rome. In order to restore his image and shore up his legacy, Kircher needed a comprehensive defense of his methods and the many astounding claims that he had made in his thirty-six (!) published works. In the “Prodromo”, Petrucci champions Kircher’s pronouncements on mummies, volcanoes, optical tricks, parabolic mirrors; mermaids, pyramids, Chinese philosophy and religion, flying cats, hieroglyphics, sea serpents, etc.

Petrucci’s work was an effort to push back at Kircher’s critics, who are symbolized on the engraved title page by a crocodile, whose mouth is being held shut by a putto, who holds aloft a long scroll with Petrucci’s defense written upon it.

“Petrucci painted a portrait of Kircher as he wanted to be remembered: a judicious experimenter who carefully weighed all the evidence before coming to any conclusions. Emphasizing Kircher’s skepticism about natural phenomena, Petrucci countered the image of his master as a gullible consumer of tall tales about strange things by presenting him as the logical heir to Galileo.” (Findlen, The Last Man who Knew Everything, p. 39).

“As portrayed by Petrucci, Kircher was not a credulous fool but rather like a modern skeptic. In the case of the snake stones, even though various priests in India ‘constantly insisted on the marvelous virtues of these stones, and each one of them had their own sensory experience with them,’ Kircher did not simply believe them. ‘He did not go according to the testimonials he collected, blindly ceding his will to odd stories,’ Petrucci wrote. ‘but kept his mind uncontaminated in the quest for truth until he would be able to learn from experiment and see for himself.’ 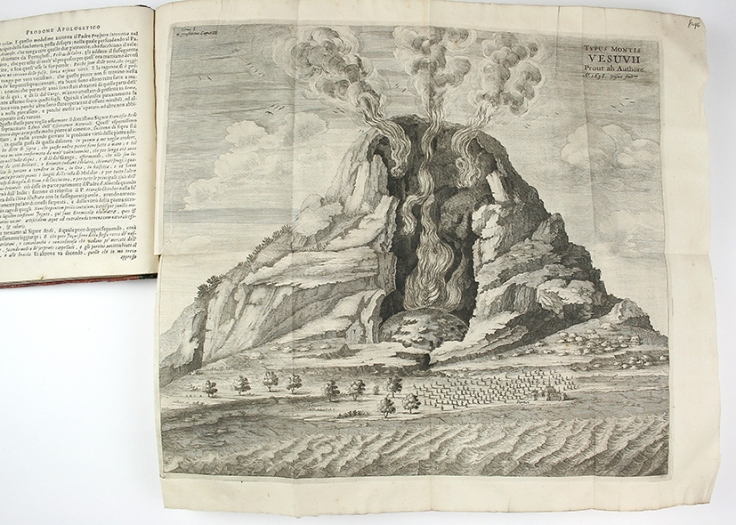 “It was in the face of evidence, Petrucci argued, that Kircher distinguished himself from Redi, who Petrucci claimed was too narrow-minded to accept anything but his own preconceived notions about the natural world. For Kircher’s willingness to be open to new and surprising discoveries, Petrucci went so far as to compare him to Galileo. Or, since Kircher was behind Petrucci’s argument, it was Kircher himself who made the case for the comparison, and who probably believed it. The book quoted many passages from ‘Il Saggiatore’ (1623), in which Galileo described the experience of coming under constant criticism, an experience Kircher must have recognized as his own.

When the time came to publish Petrucci’s “Prodromo”, Jansson, Kircher’s publisher at Amsterdam, hesitated to publish it. When the book went on sale in Rome at the Collegio Romano, only two copies were sold, one to the dedicatee’s emissary, another at Kircher’s request.