A short pre-view of books from fascicule VII 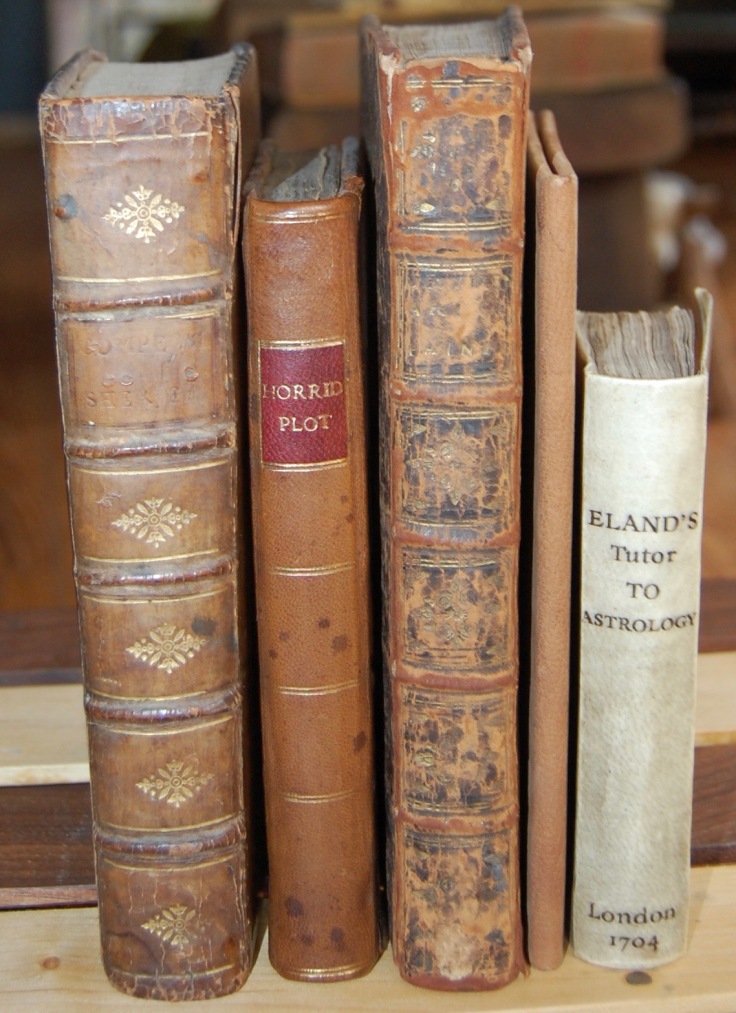 The Compleat Sheriff: wherein is set forth, his office and authority; with directions, how and in what manner to execute the same, according to the common and statute laws of this kingdom, which are now in force and use: and the judgments and resolutions of the judges in divers late cases in the several courts of Westminster, relating thereunto. Likewise of Under-Sheriffs and their deputies… to which is added, the office and duty of coroners, and many modern adjudged cases relating to the office of a Sheriff to this time, &c.

Octavo 7 ½ X 4 ½ Bound in full contemp. panelled calf, raised bands, gilt dec. spine; lacking label, sl. cracking to head of upper joint. Armorial bookplate of the Marquess of Headfort. v.g.           Second Edition with additions. This is one of those books in which the Title says it all..even including the duties of the Coroners!

A compendious history of the most remarkable passages of the last fourteen years: with an account of the plot, as it was carried on both before and after the fire of London, to this present time 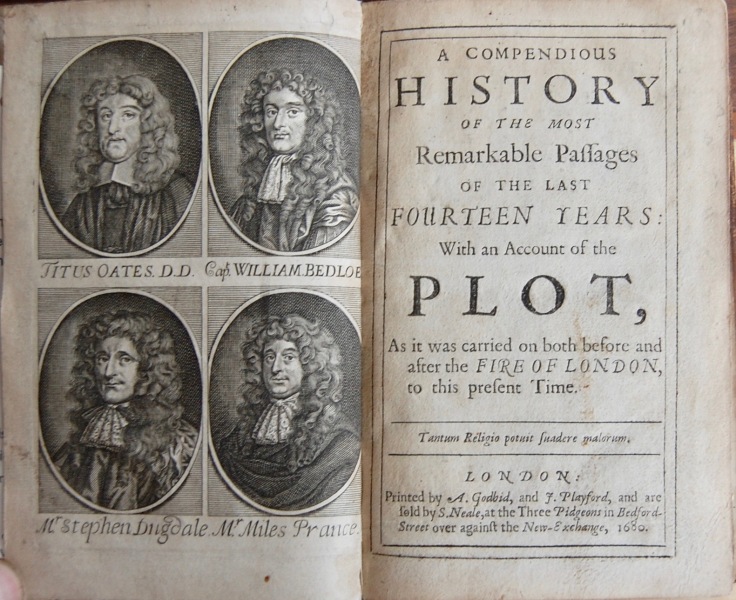 Octavo , 7 X 4 ½ inches First edition A (-A1) B-O . With frontis. portraits (plate) of Titus Oates, Captain William Bedloe, Stephen Dugdale, and Miles Prance. As well as a large fold out of London Bridge.

This is a wonderful copy expertly rebacked retaining the original sheep boards. 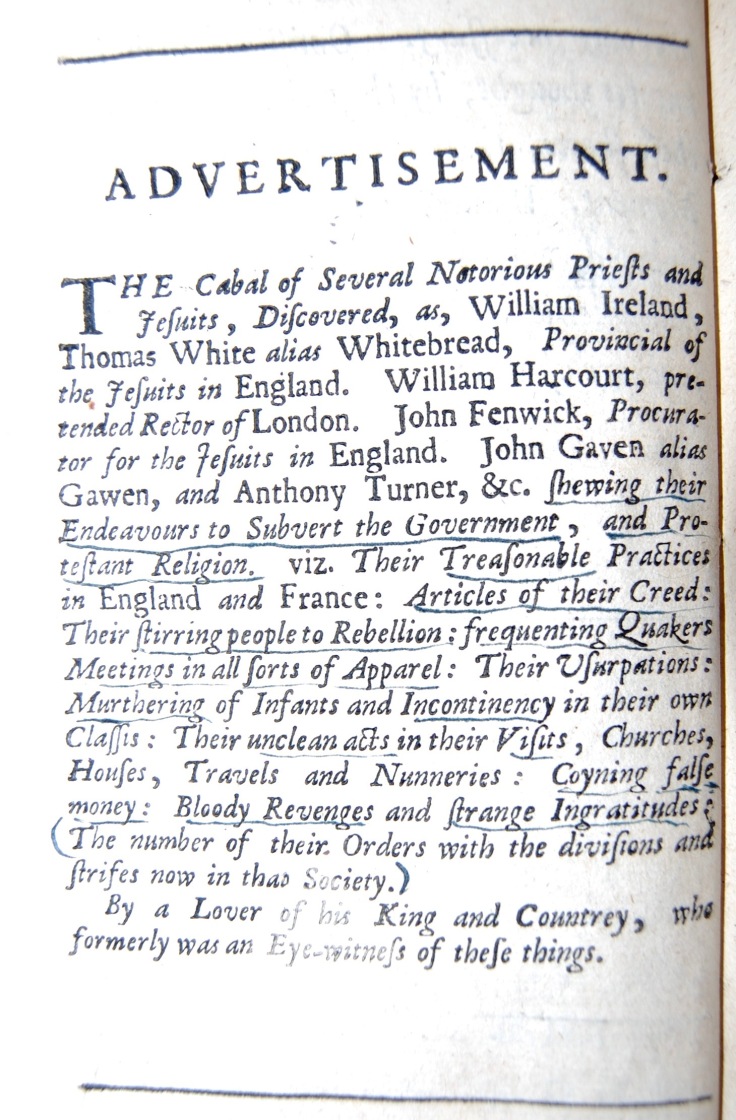 The (Horrid) Popish Plot , a fabrication of the evil and twisted mind of Titus Oates. On 28 September 1678, Oates made 43 allegations against various members of Catholic religious orders — including 541 Jesuits — and numerous Catholic nobles. He accused Sir George Wakeman, Queen Catherine of Braganza’s physician, and Edward Colman, the secretary to Mary of Modena, Duchess of York, of planning to assassinate Charles. Oates was playing on two divergent groups of Zealous biggots. 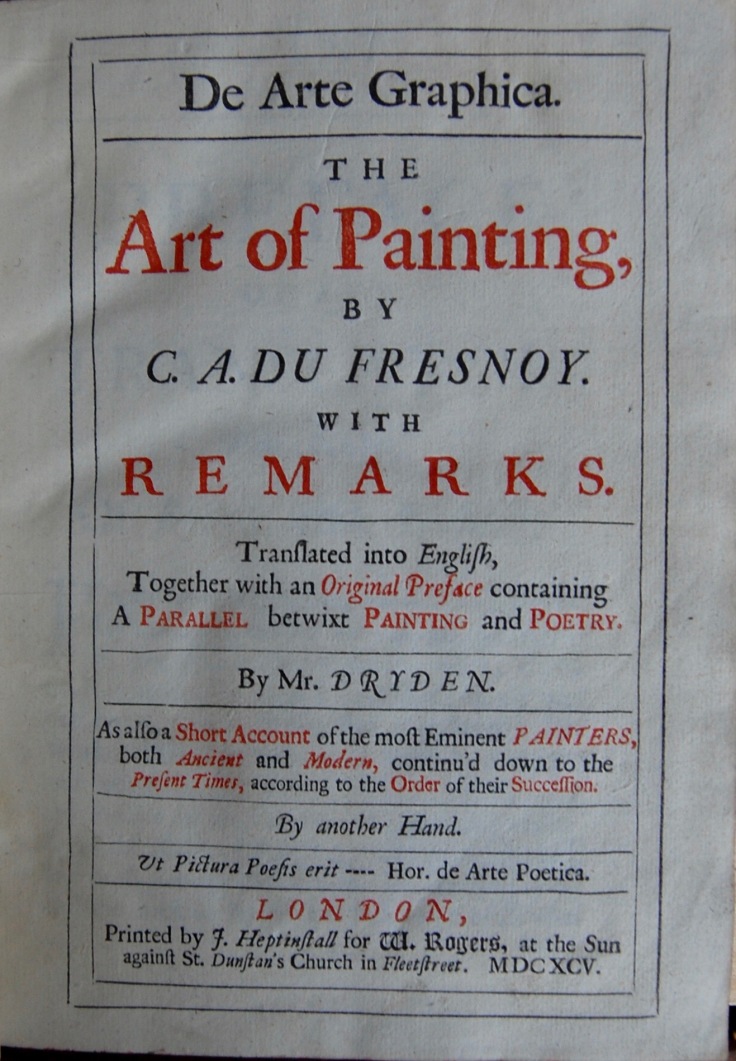 De arte graphica. The art of painting, by C.A. Du Fresnoy. With remarks. Translated into English, together with an original preface containing a parallel betwixt painting and poetry. As also a short account of the most eminent painters, both ancient and modern, continu’d down to the present times, according to the order of their succession. By another hand.

Quarto  8 1/8 X 6 in     [ ]2, (a-h)4, B-Z4, Aa-Yy4, Zz2. Internally, this copy is in very good shape.      This copy is the first edition of the text in English translation. Bound in contemporary paneled calf it is a very clean large copy.; the spine’s title label has been replaced. “His progress in his studies was more than usually promising; he soon became well versed in the classics, and at an early period of his life showed a mark genius for poetry” (Bryan’s D-96). He was a working artist who established himself within a circle of peers that inlcuded Poussin, Claude Lorrain, and, close friend, Pierre Mignard who spent several years with him in Italy. Dufresnoy and Mignard were involved in copying Annibale Caracci’s frescoes into the Farnese Palace. However, “Dufresnoy was before all things a critic, and his best known work is not a painting, but a book, “De Arte Graphica”, a manual written in extremely elegant Latin verse…and reprinted for a hundred years as a masterpiece” (CE vol.X, p.289). The academic and creative impact Dufresnoy’s book had was great; his influence reverberated across the artistic community. This is particularly clear within his circle of friends, “this rare amateur wielded a great educational influence over Mignard, and made him acquainted with Venice and its incomparable school, which our classic art had professed to despise” (CE). Lowndes describes the book as “a work of established reputation” (p. 163) and the text itself includes Dufresnoy’s explanation of the art of painting. Examples of some topics covered include “The motions of the hands and head must agree”, “The conduct of the tones of Light and Shadows”, “The reflection of colours”, “Things which are vicious in painting to be avoided”. There is also an interesting account of “the most eminent painters, both ancient and modern” by his personal judgement (includes articles on Vouet, Caravaggio, his hero, Titian, and others).
“Painting and Poetry are two Sisters, which are so like in all things, that they mutually lend to each other both their Name and Office. One is call’d a dumb Poesy, and the other a speaking Picture” (from pg. 3 of “De Arte Graphica”). Dufresnoy and Dryden helped assure this filial association between the two popular arts of painting and poetry. This text laid the groundwork for Jonathan Richardson’s seminal “Essay on the Theory of Painting” published in 1715 – a work that has been hailed as the “starting point for the classical school of art criticism in Britain” and the study of aesthetics. “ (Prince, “Aesthetics: Sources in the Eighteenth Century”).

Lucretius a poem against the fear of death. With an ode in memory of the accomplish’d young lady Mrs. Ann Killigrew, excellent in the two sister arts of poetry and painting.    London: H. Hills, 1709.   £800

First edition in this form              Price from imprint: Price One PennyThis copy is bound in full reversed calf.    Killigrew died of smallpox on June 16, 1685, when she was only 25 years old so the question has frequently been raised: is Killigrew so deserving of such an immortalizing Ode by Dryden? Had he even read her poetry to properly determine her skills? Some say Dryden defended all poets as teachers of moral truths, and therefore Killigrew, despite her lack of experience, deserved his praise. However, evidence shows that she might not have been ready to see some of her work published, such as the unfinished poem “Alexandreis,” about Alexander the Great. At the end of the poem, she expresses the feeling that the task was too great for her to take on and she would try to finish it at another time. Then, there is the question of the last three poems that were found among her papers. They seem to be in her handwriting, which is why Killigrew’s father added them to her book. The poems are about the despair the author has for another woman, and could possibly be autobiographical if they are in fact by Killigrew. Some of her other poems are about failed friendships, possibly with Katherine Philips or Anne Finch, so this assumption may have some validity.
Anne Killigrew (1686), also an elegy, is devoid of theodicean complaint and provides the consolation of apotheosis throughout. Even when Dryden, in one of the best images in the poem (“Destiny … like a hardn’d Fellon,” that is, a rapist, refused to finish the “Murder at a Blow, … But … took a pride / To work more Mischievously slow, / And plunder’d first, and then destroy’d”), laments Killigrew’s premature death from smallpox, he concludes immediately that she, like Katherine Philips, the matchless “Orinda,” died only to be “translate[d]” to heaven. Moreover, the person praised is a poet–and a woman to boot. Dryden uses the occasion to apotheosize art itself. Anne is a Beatrice, a descendant of “Sappho,” whose transmigrating soul now leaves its peregrinations to sing eternally in a heavenly choir and to whom Dryden and other poets can now pray for poetic inspiration:

Hear then a Mortal Muse thy Praise rehearse,
In no ignoble Verse;
But such as thy own voice did practise here,
When thy first Fruits of Poesie were giv’n;
To make thy self a welcome Inmate there:
While yet a young Probationer,
And Candidate of Heav’n.

Dryden portrays this “Poetess” as having “Wit … more than Man,” as being indeed quasi-divine, a second Christ who “attone[s]” for the “Second Fall” of mankind through bad poetry, bad art, and bad drama; a second Noah in her ability to people creation itself through her portraits; and a cocreator who has the power to paint not only James II’s “Outward Part” but to “call out” with her very “hand” the “Image of his Heart.” Dryden thus portrays Anne’s agency on earth as a second Incarnation, one that, like Christ’s, raises mankind up to higher status–especially the “Sacred Poets,” who, at the sound of the “Golden Trump” on Judgment Day, will, because “they are cover’d with the lightest Ground,” spring first from the earth “And streight, with in-born Vigour, on the Wing, / Like mounting Larkes, to the New Morning sing,” led by Anne “As Harbinger of Heav’n, the Way to show.” Dryden has granted this “Virgin-daughter of the Skies” the status of the Blessed Virgin or Sophia, by implication a coequal member of the Trinity (from which the figure of woman has been conspicuously absent). And one of the main fictions of the poem is that his Pindaric poetry itself participates in the divine emanation. Without music itself, this poem is as wonderfully lyrical as anything the age produced. Witness the last stanza in its entirety:

When in mid-Aire, the Golden Trump shall sound,
To raise the Nations under ground;
When in the valley of Jehosaphat,
The Judging God shall close the Book of Fate;
And there the last Assizes keep
For those who Wake, and those who Sleep;
When ratling Bones together fly,
From the four Corners of the Skie,
When Sinews o’re the Skeletons are spread,
Those cloath’d with Flesh, and Life inspires the Dead;
The Sacred Poets first shall hear the Sound,
And formost from the Tomb shall bound:
For they are cover’d with the lightest Ground
And streight, with in-born Vigour, on the Wing,
Like mounting Larkes, to the New Morning sing.
There Thou, Sweet Saint, before the Quire shalt go,
As Harbinger of Heav’n, the Way to show,
The Way which thou so well hast learn’d below.

The play off the inverted iamb every time the line begins with “When” and then leads, in the first instance–or slams, in the third–into a spondee provides wonderful metrical variation, even as the foot-lengths vary, producing, along with the alliterative f’s and the collapsed iambs of the second line, these great sound effects: “When ratling Bones together fly, / From the four Corners of the Skie.” The use of medial caesuras is masterful especially in the last five lines, including double caesuras that allow the succeeding lines to explode forth in imitation of the mounting larks/resurrected bodies

Eland’s tutor to astrology : or, astrology made easie; being a plain introduction to that art, … The tenth edition. Corrected from its former errors, and enlarged.

A4, is an advertisment for three books sold by G. Conyers,J Sprint and Tho Ballard including “A Wonderful history of all the storms, hurricanes, earthquakes, &c. That have happen’d in England for above 500 years past, and the great dammages they have done, with a particular and large account of the dreadful-storm, that happen’d on the 26th and 27th of November, 1703. “ which shows up in only two copies, it seems all the books sold by these sellers are rare. The Title page lists “Geo. Parker as the Author, yet ESTC leaves it as WilliamEland, the intooduction ‘to the reader’explains this in a typically early eighteenth century was the rather cloudy relation between the book ‘compil’d nearly half a century of yerars since,” and the Author’s memory.