Today I’ll  Post this rare ( only a handful of copies in the US) and interesting book on reading comets. The anonymous author states :

” I know it’s easier to define what Comets are not, what they are positively to say, is not so easy: To propose them (not impose) as is fair in Schools of Philosophy: I only offer, Why may they not be providential matte framed and created of God for the ends proposed, (as the stars at first) to signifie Gods Wrath at hand ; for mans sin? and all newly made as the rainbow was.

But because I pretend not to any abstrusity of judgment in that enquiry: I say as Noble Picus Mirand.

That I English thus,

Philosophy for truth does seek,

But tis posses only by meek

and most religious minds.”

Anonymous O ̓Αστηρ του Χριστου Βασιλικος: or, Nuncius Christi Sydereus. The Star of the Eastern-Sages; being a discourse of that Star, its nature, conduct, and tendency, With the glorious kingdom of the Son of God, (now) under the cross, and shortly at his next appearance to fill the whole earth. Also some account of comets, and other signs presaging it.

London : printed for Dorman Newman, at the Kings-Arms in the Poultrey, 1681. 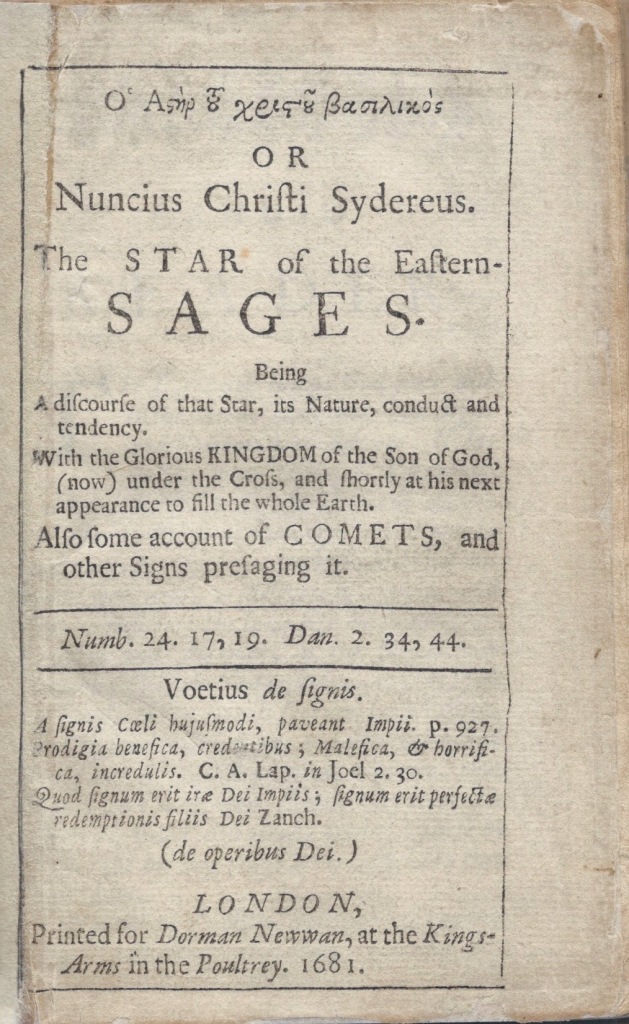 A collection of four apocalyptic sermons,like other writers on comets of the time Comets foretell the evil of the Pope? This book was advertised in the Wig Newspaper the Impartial Protestant Mercury.This book does not appear with a dedicatee but there is a copy in the Huntington Library that has a manuscript verse dedication to Shaftesbury, addressed as the savior of the nation, on the fly leaf (Millenarianism and Messianism in early modern European culture) (Force & Popkin 2001)    There is an interesting entry for the “Anno 1652, John Cotton of N.E. dyes, our changes by O.C.Protector , the long Parliament disolved, Scot(l)and invaded and subdued.”