Bees ,Spelling, Gender, Music & all in one book!

In 1623 George Wither wrote :
When I had view’d this Common-wealth of Bees,
Observ’d their Lives, their Art, and their Degrees,
As; how, beside their painefull Vulgar ones,
They have their Prince, their Captaines, and their Drones:
How they Agree; how temp’rately they Feed;
How curiously they Build; how chastly Breed;
How seriously their Bus’nesse they intend;
How stoutly they their Common-good defend;
How timely their Provisions have provided;
How orderly their Labors are divided;
What Vertues patterns, and what ground of Art,
What Pleasures, and what Profits they impart:
When these, with all those other things I minde
Which in this Booke, concerning Bees, I finde:
Me thinkes, there is not halfe that worth in Mee,
Which I have apprehended in a Bee.
And that the Pismire, and these Hony-flies,
Instruct us better to Philosophize,
Than all those tedious Volumes, which, as yet,
Are least unto us by meere Humane-wit.
For, whereas those but only Rules doe give;
These by Examples teach us how to live.

Great God Almighty! in thy pretty Bee,
Mine Eie (as written in small letters) sees
An Abstract of that Wisdome, Power, and Love,
Which is imprinted on the Heav’ns above
In larger Volumes, for their eies to see,
That in such little prints behold not Thee.
And in this Worksmanship (oh Lord) of thine,
I praise thy Wisdome, and thy Power divine.

And Praise deserves this Author; who hath chose
So well his Times of Leisure to dispose,
And in that Recreation to delight,
Which honour God, and us advantage might.
For, since our humane weakenesse doth require,
That in our serioust Labours we retire;
(Because unlesse the String be sometime slacke
The strongest Bow will have the feeblest backe)
What Recreation better can befit
Our grave Divines; than (when the Holy writ
Is laid aside) in Gods great booke of Creatures
To reade his Wisdome, and their usefull Natures?

Thus doth our Author. And, not only thus;
But, like his Bees, makes hony too for us.
And is contented that, to helpe us thrive,
We should partake the profit of his Hive.
For which (my share) I thanke him: and for those
The Muses-Birds; whose nature here he showes.
And mauger such as will his Paines contemne,
The Muses thus, by me, doe honour them.

So if you made it through Wither’s Poem….you can see his great respect for Butlers book!  In this wonderful 186 page book we See how Butler earned the title Father of English Beekeeping.

As you might have noticed from the title this book while ‘about’ the economy of Bees it is much more it is in fact :

“THE FIRST BOOK IN ENGLISH PRINTED WITH PHONETIC SPELLING, for which special roman and italic fonts were cast and first used in this edition.”  In addition he introduces many ‘new’ words and phrases.

But there is more Butler transliterated the tones and included them on a musical score in the book into a Bee madrigal (preformed here https://www.youtube.com/watch?v=9wksxYDgafg An interpretation of Charles Butler’s madrigal of 1623 by Soprano: Ann Chen, Alto: Courtney Blake, Tenor .) He further suggested that musicians may trace the roots of music back to the sounds of the hive.(Sarton, George (1943). “The Feminine Monarchie of Charles Butler”, Isis, Vol 34, No 6. pp. 469-472) Butler, being master of the art of music, as of many other arts, attempts to set down the song of the bees when busy in their hive. He tells us that he pricked down the bees’ music with the help of a wind-instrument, but confesses that his dull hearing could not perfectly analyse the confused noise of the buzzing bees, and that he was obliged to make out the conclusion as best he could. He assigns the treble part to the princesses, the bass to the queen, and tries to show how the inner parts are supplied. The glee in four parts and triple time, which he prints as the Bees’ Song, must not, of course, be taken for a real transcription of the sounds of the hive; it would be as reasonable to believe that the bees composed the verses to which the song is set. In the printed music the bass and counter-tenor parts are printed upside-down, so that four singers, each holding his own corner of the book, may sing away together.

Wow, what an Idea, Butler is really trying to reform the world, through understanding Man’s relations to sound and transcription, at the musical, phonetic and verbal levels. Butler introduced eight new letters—aspirates —into the English language, besides other eccentricities of orthography.

Now and then come across forgotten English phrases and words, e.g. “it is also convenient for each hive to have his settle before him;”1 the bees are said to return to the hive leere? &c. Butler’s lively expression often charms the reader, as in the following passage:—” There remaineth yet another enemy worse than all these; for these all do wrong the bees but by little and little, some in their goods, some in their persons, and there is remedy shewed, if industry be not wanting, against them all. But this,” he means the stealer of hives, “when he cometh, playeth sweepstake with them, carrying away both honey and wax and bees and hive, &c.”

Butler was parson of Laurence Wotton, near Basingstoke, and master of Basingstoke grammar-school. He wrote other books besides the Feminine Monarchy, a treatise on rhetoric,The Logic of Ramus (1597)  Rhetoricæ libra duo (1598) a book on music, The principles of musik (1636) a treatise on consanguinity in marriage, Syngeneia:De propinquitate matrimonium (1625) and an English grammar with a new phonetic spelling, and a book on the principles of spelling.The English Grammar (1633).  Butler condemned the vagaries of traditional English spelling and proposed the adoption of a system whereby ‘men should write altogeđer according to đe sound now generally received’

“The Feminine Monarchie, originally published by Joseph Barnes, Oxford, in 1609, is the first full-length English-language book about beekeeping. It remained a valid and practical guide for beekeepers for two hundred fifty years, until Langstroth and others developed and promoted moveable comb hives. Butler revised The Feminine Monarchie in 1623 and 1634. It was translated into Latin in 1678 and 1682, then from Latin back to English again in 1704. The title expresses Butler’s main idea that the colony is governed, not by a king-bee, as Aristotle claimed, but by a queen-bee. The last edition written by Butler contains ten chapters, including sections regarding bee gardens, hive-making materials, swarm catching, enemies of bees, feeding bees, and the benefits of bees to fruit (pollination). The book gives an excellent account of skep beekeeping, including methods of predicting – from tone pitch of the buzzing bees – when swarming might occur.” (Wiki)

Among the implements which he recommends to the bee-master is a drone-pot, that is, a weel made of wire, and used like a lobster-pot. The drone-pot is set at the door of the hive, and is so constructed that the drones can enter it, but cannot leave it again. In this way drones can be caught and killed, whenever it is necessary to prevent waste of the store of honey.

Butler, being master of the art of music, as of many other arts, attempts to set down the song of the bees when busy in their hive. He tells us that he pricked down the bees’ music with the help of a wind-instrument, but confesses that his dull hearing could not perfectly analyse the confused noise of the buzzing bees, and that he was obliged to make out the conclusion as best he could. He assigns the treble part to the princesses, the bass to the queen, and tries to show how the inner parts are supplied. The glee in four parts and triple time, which he prints as the Bees’ Song, must not, of course, be taken for a real transcription of the sounds of the hive; it would be as reasonable to believe that the bees composed the verses to which the song is set. In the engraved music the bass and counter-tenor parts are printed upside-down, so that four singers, each holding his own corner of the book, may sing away together.

Bees may be seen, says Butler, to blow liquid wax from their mouths. Sometimes they do it in such a hurry as to drop the wax in the form of loose white scales on the stool or the “skirts” of the hive; these scales, when warmed, can be kneaded into pellets. Butler was on the way to discover how wax is secreted, but was too impatient to work the matter out properly.

The hexagonal cells (Butler does not call them hexagonal, but six-square, a convenient English word, which we have unwisely dropped) are thought to be due to the fact that bees have six feet. He notes some of the advantages of the six-sided prism, though not its strength nor its economy. He describes the pyramidal ends, and the way in which every cell adjoins three cells of the opposed layer.

Bee-bread, such as the workers bring home on their hind feet, was then popularly believed to be some kind of wax; Butler, however, calls it “gross honey,” or “gross leg-honey,” and explains that it has a sweet taste, while it does not melt with heat. Nothing was then known of the use of bee-bread in feeding the larvae. Liquid honey, he rightly explains, the bees collect with their tongues, and “let it down into their bottels.” Virgil (who in this follows Aristotle) misleads Butler on one point, making him say that the purest nectar comes from above (” aera mellis caelestia dona “).

When he comes to treat of the collecting habits of bees, Butler furnishes some details which show close observation :—”They gather,” he says, “on the flowers of the maple a whole month together, and somewhat on the flower of vetch, when his time is, but the greatest store of honey is drawn out of the black spot of the little picked (piked, or pointed) leaf (stipule) of the vetch, which groweth on each side of the two or three uppermost joints. These they ply continually: I never saw vetches, how far soever from hives, that for three months together (if the weather served) were not full of bees. 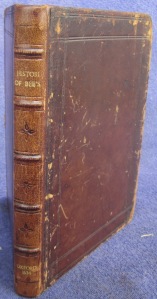 of them from tim t tim : and the sweet profit arising ther of. Written out of experienc by Charls Butler, Magd.

Quarto ¶-¶¶ B-Z 2A . Third Edition (the first in this font!) Bound in full later calf rebacked about 100 years ago, it is a nice large copy.

2 thoughts on “Bees ,Spelling, Gender, Music & all in one book!”