Every one should have a copy of this book! As those who are tuned into everything relating to the antiquated technology known as the book, probably know: there is a move to ban  Anne Frank: The Diary Of A Young Girl (The Definitive Edition). http://www.npr.org/blogs/thetwo-way/2013/05/13/183559164/book-news-mich-school-system-wont-ban-anne-franks-pornographic-diary

The ‘Index’ was certainly not a bad place to look if you wanted to find powerful books. I would suggest you ‘collect them all, watch it grow… 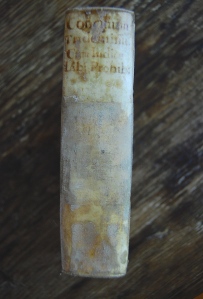 The Index Librorum Prohibitorum  was the list of publications prohibited by the Catholic Church. A first version (the Pauline Index) was promulgated by Pope Paul IV in 1559, and a revised and somewhat relaxed form (the Tridentine Index) was authorized at the Council of Trent. The promulgation of the Index marked the “turning-point in the freedom of enquiry” in the Catholic world. The final (20th) edition appeared in 1948, and it was formally abolished on 14 June 1966 by Pope Paul VI.

The avowed aim of the list was to protect the faith and morals of the faithful by preventing the reading of immoral books or works containing theological errors. Books thought to contain such errors included some scientific works by leading astronomers such as Johannes Kepler’s Epitome astronomiae Copernicianae, which was on the Index from 1621 to 1835. The various editions of the Index also contained the rules of the Church relating to the reading, selling and pre-emptive censorship of books, including translations of the Bible into the “common tongues”.

Some of the scientific works that were on early editions of the Index (e.g. on heliocentrism) have long been routinely taught at Catholic universities worldwide. Giordano Bruno, whose entire works were placed on the Index on 8 February 1600

In 2002, a retired Roman Catholic bishop gave his personal approval to the writings of Maria Valtorta, which had been on the Index (though never in a printed edition) and which have still not been given official Church approval.

Mary Faustina Kowalska, whose writings were likewise forbidden, was canonized in 2000,  and Antonio Rosmini-Serbati, one of whose works was on the Index, was beatified in 2007. The developments since the abolition of the Index signify how important as a historical document the Index was.

This dense book contains the Decreta, Canones and Bulls document the Council of Trent. 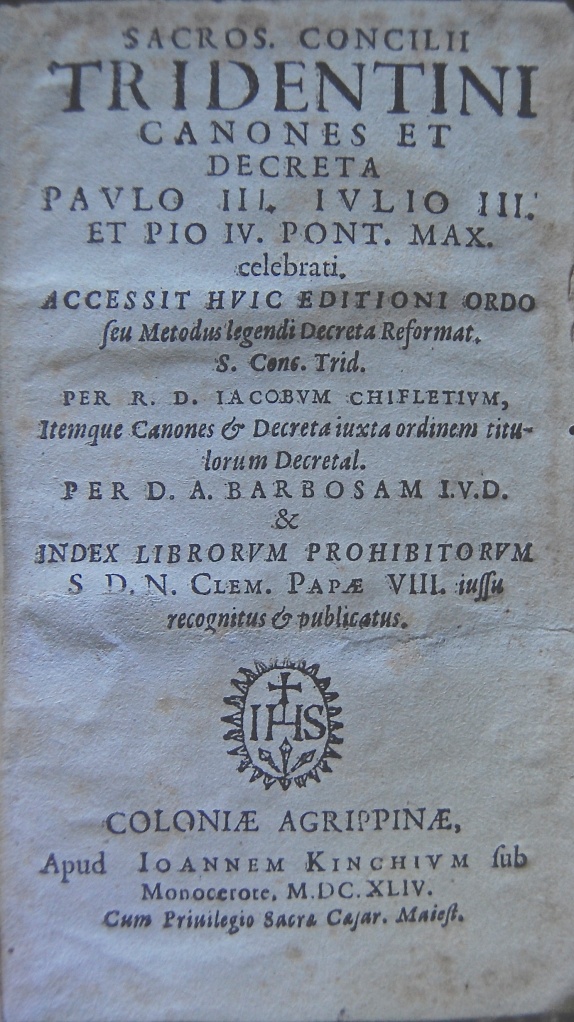 The Tridentian Councils began on the 13th December, 1545, and lasted, with long interruptions, till the 4th of December, 1563. The attendance varied in the three periods and Popes: under Paul III. the number of prelates never exceeded 57, under Julius III. it rose to 62, under Pius IV. it was much larger, but never reached the number of the first oecumenical Council (318). The decrees were signed by 255 members, viz., 4 legates of the Pope, 2 Cardinals, 3 Patriarchs, 25 Archbishops, 168 Bishops, 39 representatives of absent prelates, 7 Abbots, and 7 Generals of different orders. Two thirds of them were Italians. >From France and Poland only a few dignitaries were present; the greater part of the German Bishops were prevented from attendance by the war between the Emperor and the Protestants in Germany. The theologians who assisted the members of the Synod belonged to the monastic orders most devoted to the Holy See.

The decisions of the Council relate partly to doctrine, partly to discipline. The former are divided again into Decrees (decreta), which contain the positive statement of the Roman dogma, and into short Canons (canones), which condemn the dissenting views with the concluding ‘anathema sit.’ The Protestant doctrines, however, are almost always stated in an exaggerated form, in which they would hardly be recognized by a discriminating evangelical divine, or they are mixed up with real heresies, which Protestants condemn as emphatically as the Church of Rome.

The doctrinal sessions, which alone concern us here, are the following:

The last act of the Council was a double curse upon all heretics.  which makes sense that the Index follows this.

The decrees, signed by 255 fathers, were solemnly confirmed by a bull of Pius IV. (Benedictus Deus et Pater Domini nostri, etc.) on the 26th January, 1564, with the reservation of the exclusive right of explanation to the Pope.

The original acts of the Council, as prepared by its general secretary, Bishop Angelo Massarelli, in six large folio volumes, are deposited in the Vatican, and have remained there unpublished for more than three hundred years. But most of the official documents and private reports bearing upon the Council were made known in the sixteenth century,  and as printed here.